General Excel discussions. You may also post Eclat and Elite information here. If there is enough call I will set up new categories or even a new BB for them.

I've often wondered just how much pull the vacuum pods on the Elite exert so I built a little jig today to find out: 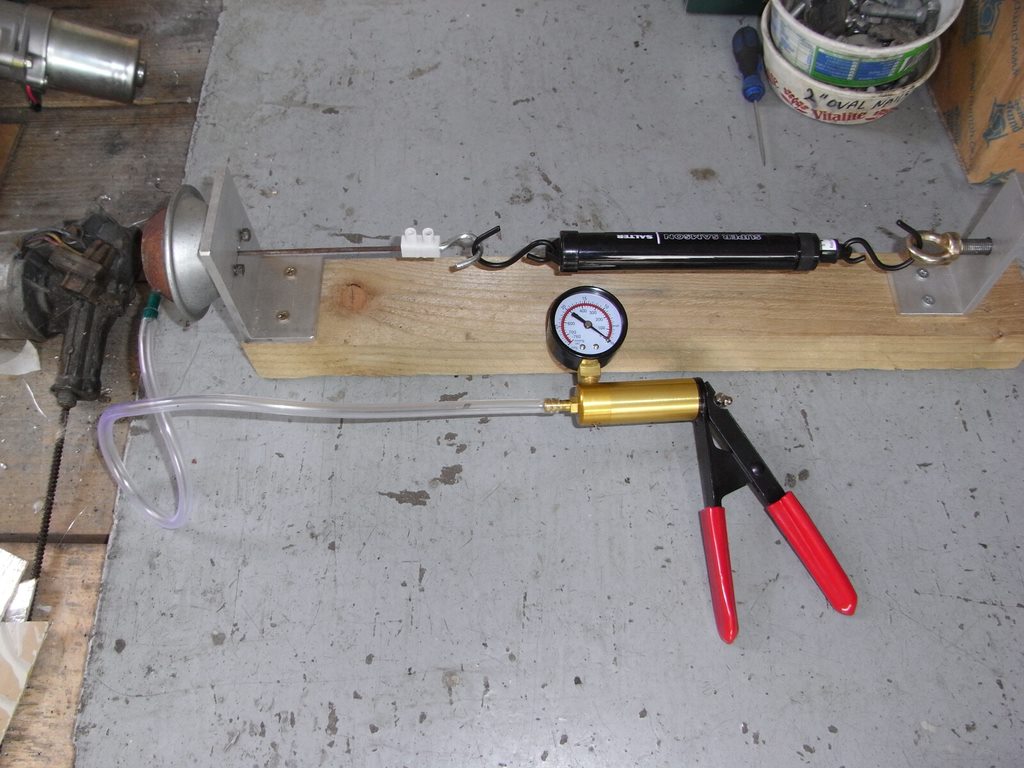 This is a just little vacuum pod from the aircon. At 15"Hg vacuum (similar to engine vacuum at idle) it pulled over 8kg! The headlight pods must really pull hard!

Interesting.
I was considering trying one of those to remote release the rear hatch.
I'd tried a couple of CL door 12 V actuators, but without success. IIRC, I was getting about 6 Kg, but it was inconsistent and right on the edge of working.
Just possible if I can find the space they might work then.
Thought I had a spare heater unit to steel one off, but somewhere in the last 30 years I've lost it

. Might take a look on ebay for similar.
Tony
What goes together.... Must come apart.
Top

. You and I think along the same lines Tony!

The trick I found was in the setting of solenoid rod. If it was (near) fully extended (or retracted) it failed to pop (pull) the catch. There is a sweet spot where the solenoid pulls the rod at max force (rod around about 2/3rd extended) It's a matter of trial and error to find the optimum resting rod extension. Also mine pulls directly on the catch (drill the catch for the rod), it's not strong enough to pull remotely via a cable (frictional losses). Works consistently but a faff to set it up.
Peter K
Top

Just wondering - if a solenoid isn't strong enough, what about a seat height adjustment motor like this: https://www.ebay.co.uk/itm/BMW-F07-GT-F ... ondition=4

You really need a device that returns to its starting position as soon as you let go of the switch.

Audis and Mercedes used to use vacuum motors to operate the central locking having a little vaccum pump and a lot of pipes. Isn't the force just the vacuum pressure times the area of the diaphragm? I guess the diaphragm is the same diameter as the pod.
Top

TrevorK wrote: ↑
Tue Aug 04, 2020 21:44
Isn't the force just the vacuum pressure times the area of the diaphragm? I guess the diaphragm is the same diameter as the pod.

. It's the same as brake servos - it's the area (and therefore diameter) that's important.

Correct. Its not the force exerted by the motor thats important but the area of the diaphram because its atmospheric pressure ( about 14psi at sea level I seem to remember from the dimness of my memory ) exerted on the area of the diaphram, and you will only get that if the vacuum behind it is perfect, which is unlikely. But, what I would like to see is the most stupid use of your new found tool, will it lift a toilet seat for instance ?

Bash
You are only young once but you can be juvenile all your life !!
Top

It would easily lift a toilet seat, even taking into account the multiplying action of any levers needed!

A salutory lesson in force = pressure x area I once heard about concerns defibrillators on aircraft. They are fitted in a rugged yellow case, say 24" x 12" in size. There is normally a pressure equalization valve fitted to ensure pressure inside the case equals the pressure outside, i.e. the cabin pressure. However, on this occasion a blanking grommet had been wrongly fitted instead of the valve.
The defib was needed while the aircraft was in cruise, so the cabin pressure was at 10000 feet, about 10 psi. Pressure inside the case was a ground level (14.7 psi), so no issues with opening the case. The defib was used then stowed away. So the pressure inside the case is now at cabin altitude, i.e. 10 psi.
An unusual situation occurred during the final approach because the defib was needed again. However now the cabin pressure was now almost ground level (14.7 psi), whereas that in the case was 10 psi. The cabin crew found they couldn't open the case, so the defib could not be used, with tragic results. The ground air pressure was holding the case closed, with a force of (14.7-10) psi x 24" x 12" = 1353lb. Well over half a ton holding the case closed.
You can see the same effect on your water bottle that you might have drunk from during the cruise, but it gets crushed as the aircraft descends. Physics at work, my friends...
Bryan

If your tank is stuck when you want to remove it try running the pump with the tank breather blocked. Tank will probably collapse due to the small vacuum thus created inside it.
Top
Post Reply
12 posts • Page 1 of 1