Another thing Ive just remembered is that I am on engine mountings V3. The Lotus rubbers were too soft, so I made up some new mountings using Landrover rubber doughnut types, these also were too soft allowing the engine to move around when revved hard. I'm now on similar landrover ones that are heavier duty, these are the same size as the doughnuts but are a sandwich of harder rubber with a steel plate in the centre. Still no vibration issues from these but much more control of the engine movement. I did try stiffening up the gearbox mount, which is still the lotus item, by filling the void between the two rubbers with windscreen sealant, but that resulted in unwanted driveline vibration so I went back to the standard lotus mount.

Jobs still to do, theres always some isnt there, Im going for a concentric clutch release bearing because my present set up is a collection of bits from other vehicles as outlined earlier, which works fine but is slightly noisy. My rear sections of the exhaust are standard Excel with no centre box and it is still quieter than the standard Lotus engine with no centre box... can't figure why. It stills sounds extremely nice but I may try a different setup over the winter to get a slightly deeper sound from the exhaust at low revs. At high revs it sounds excellent already. And then there are other things not related to the conversion like a window frame replacement and if I get time possibly retrofit aircon.

I might still have the aircon steel pipes from my Excel if they're any use.

Brilliant Pete, just what I need. I will have a run over at some point..

Thought Id put an update 2 years after the conversion..... would I do it again.... very yes. The cars fast, very tractable, handles just as well as with the Lotus engine but can be a handful on damp roads because of the torque that its putting out... which is fun. The torques also handy when poddling about because I miss half the gears out when going up the box. It does about 24/26 mpg normal running about, pissing about drops that to the middle teens....which also is fun. It sounds wonderful at all times without being obtrusively loud, in fact normal running is just a nice burble, as is tickover ( I ought to do a video really). Its never overheated but does take a little longer to warm up on a cold day. Nothings broke dropped off or worn out in the intermediate time. Ive declared the mods to the insurance company and they havnt loaded the insurance. Bits for rover v8s are very cheap and readily available. Overall, bearing in mind I drove it for 20 years with the Lotus engine, it is a nicer car to drive.
Anything that Ive found out since.... well, there is only one standard starter motor that fits in the space, dont ask me which one it is cos I get easyly confused, and the clutch release bearing is slightly squeely, my fault, should have used a curved face bearing with the straight clutch fingers, or viseversa ( Ive got a flat face bearing with straight fingers at the moment, hence the noise ), something I will rectify when the engine next comes out but only slightly annoying when stood at traffic lights.
viewtopic.php?f=3&t=11207
Ive attached the rough drawing of the lotus engine position as Ive posted it elsewhere and it may come in useful to someone else

Let me know if you need pictures of an empty engine bay with most of the aircon plumbing. The dryer position will have to move - you have an extra cylinder and exhaust manifold in that space now! The aircon pump on mine is on the passenger side so will need to re-route everything.

Yes please, the pipe routing may be useful.
Bash
On a mission to find the airspeed velocity of a european swallow.
Top

OK - here it goes - this is a lot messier than I thought!

Pictures are form a 1987 Excel SA which has a lot of plumbing in it - Engine oil cooler, gearbox cooler, power steering plumbing, air-con plumbing as well as the usual heater and coolant lines - I have run coloured lines along the pipes to help keep track of where they are...

The picture below is of the air box at the front of the car (this pic is from a recent thread which chows the cold-air intake as well from a later car) - the yellow circle is where the pipes feed through from the engine bay to the condenser. 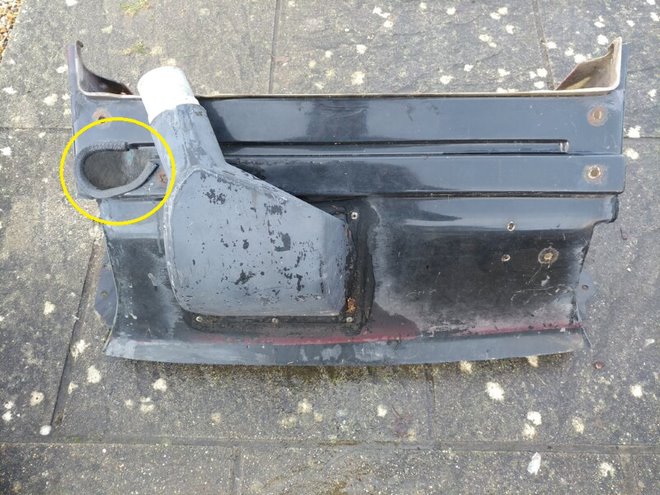 The next picture shows the pipes (circled in yellow) where they come out from the air box above the radiator into the engine bay. The bit circled in red is simply a joint in the pipe. 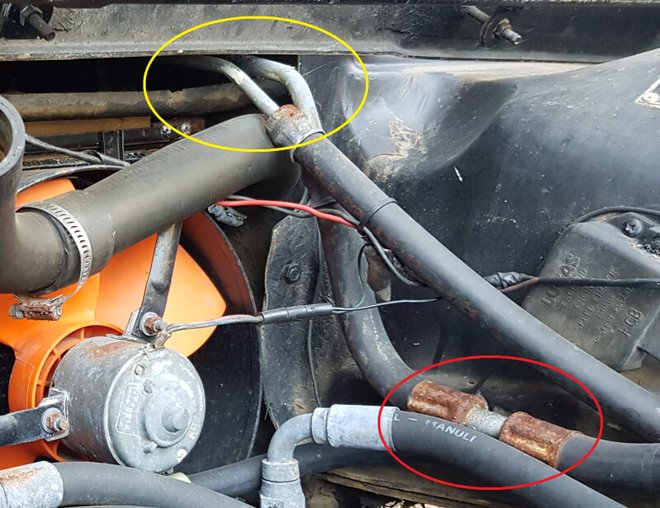 This picture shows where the lines run along the back of the engine bay - from compressor is the bluish line, the green one is from the drier.

The final picture is taken from above where the lines go into the cabin on the passenger side.

Blimey, thats brilliant. I didnt realise that the dryer was located there for one thing but the pipe routing is going to come in handy. Thankyou.
Bash
On a mission to find the airspeed velocity of a european swallow.
Top

No problem - will be rerouting most thing on mine - the compressor is on the other side of the engine, and the drier space is no longer space! Will pop in to see an aircon specialist in the next week or two to see what is possible or not - I'm running out of space for things - need to get a remote oil filter and an air filter in somewhere along with the drier.

Hi Bash, great thread and lovely job on a fantastic car!! Did you ever get round to fitting the EFI inlet kit? I can confirm that it fits under the bonnet, with clearance- on my car, at least...
Again, great job!!
Top

Thanks for the comments, as for the injection, No, is the quick answer. I have got all the injection gear ready to go but the dilemma is why change when its running so well on the edelbrock 500carb and Ive totally got my head around how it works. On a purely asthetic note I think the carb setup looks better too. I have been looking at the self tuning 4 barrel injection setups and they are quite tempting but the only advantage I can see over the carb is probably better fuel consumption, and being a Yorkshireman........ Well you know the rest. My main problem at the moment is time cos Ive recently moved house. I suppose that I should sell the injection gear and take that off my list of gunners ( gunna do this gunna do that ).
Bash
On a mission to find the airspeed velocity of a european swallow.
Top

At the risk of looking an idiot...... Ive changed my mind on more mods. I had been having problems with a sticky throttle off idle for most of the summer. I had different cables, cable angles, had the pedal out to check it, and it still wanted to leap off of idle which made it a pain in traffic, especially as I like to drive as smoothly as possible. Turns out its the edelbroc carb and the primary throttle shaft which has about 1/8" play on one end. Unfortunately theres no bush there and its worn the throttle housing. You could have it machined out and a nylon bush fitted apart from its caused another issue. The sticky throttle was the butterflies jamming slightly and has worn a groove in the body as well.
Anyway, Ive decided to go fuel injection with a 4 barrel self tuning system from fitech with an in tank high pressure pump. Ive got all the kit and Ive just drained the tank. I could show the build on here if anyone is interested even though v8s are rare, what do you think

Would be very interesting in a more general sense for those without your setup or considering it.

I say document it on here! My V8 has a fly-by-wire throttle, so no sticky cable issues for me.......

Any particular reason to go in tank for the fuel pump? Was the one you had noticeably noisy?

. Which fuel pump are you using? I've gone for a Bosch 044 with a swirl pot - all below the level of the tank. Looking forward to hearing about the self-tuning bit.

Return to “Upgrades and modifications”