I've got a pile of old car magazines (haven't we all?) and hidden in them are a stack of classic Excel and Lotus related articles & pictures. Having some time on my hands recently (can't imagine why!) I've scanned a few in and thought I'd share them. Enjoy!

In 1983 Car magazine (wonderful mag, big favourite of mine in the 70s & 80s) ran a competition, the prize was a new Excel! Here's the article from the December 1983 issue talking about the build at the factory with some great pics. The article is titled "Taking the Hethel line". 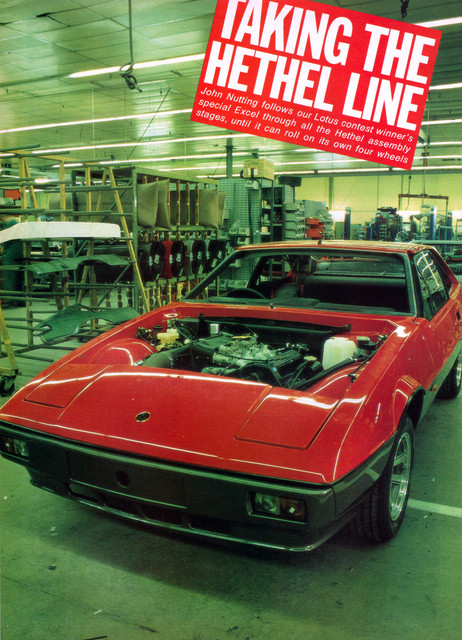 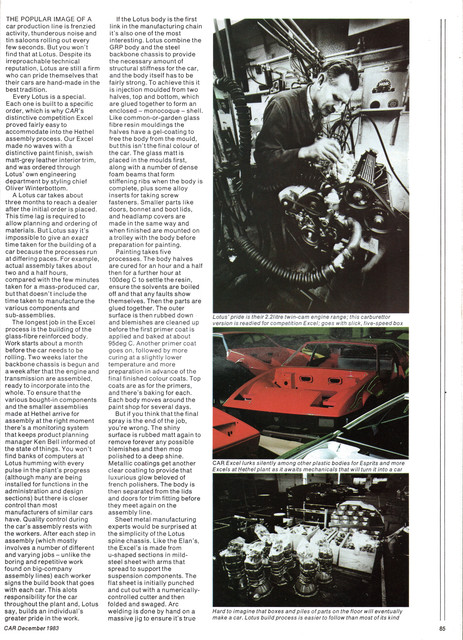 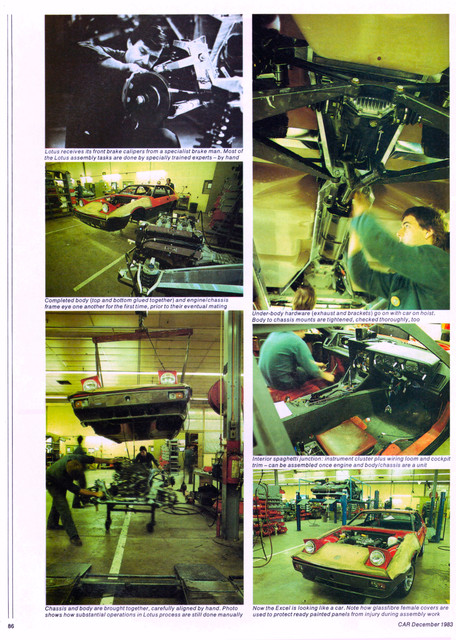 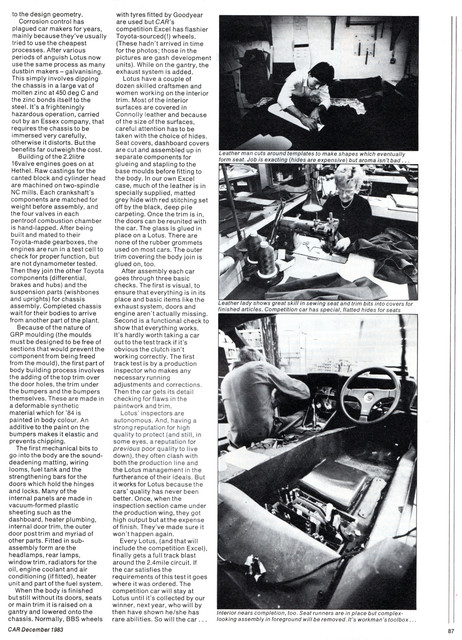 What goes together.... Must come apart.
Top

Tony - yes, interesting that they chose dustbins as an example of galvanised product and not Porsche 911's, which by the 80's were fully galvanised.

From the same December 1983 issue, the Excel competiition page: 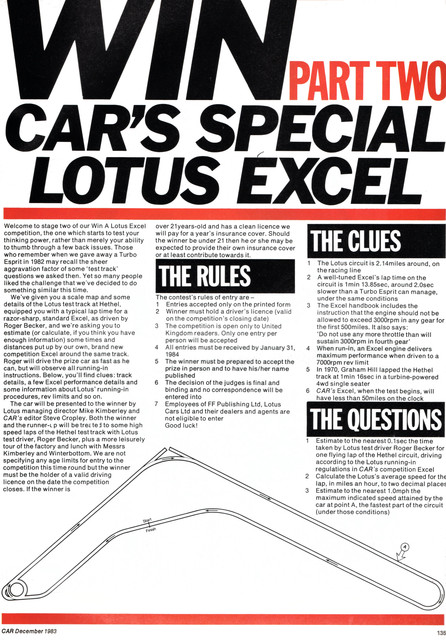 and an Esprit advert: 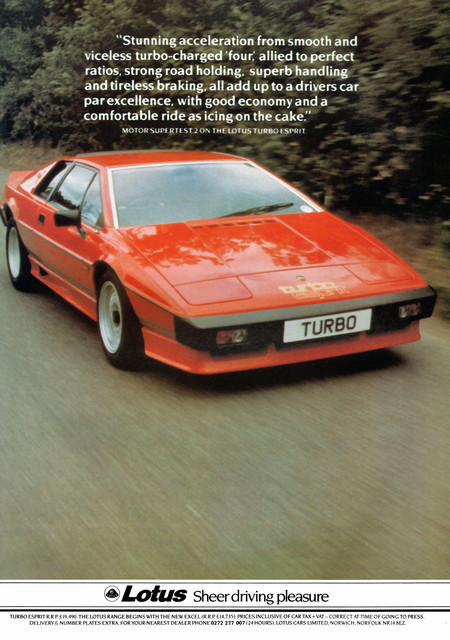 I notice the price of an Excel at the time was £14,735 - that's a pretty expensive prize for those days. I seem to remember that small houses down my way didn't cost a lot more than that in 1983. I also don't remember entering this competition - too busy mucking around with Sunbeams and motorbikes as I recall.
Top

So a Turbo Esprit was 2.15s quicker around the Lotus track than the Lotus turbine single seater. Interesting.
What car is that?
Top

..and the final piece of Lotus trivia from December 1983 Car magazine is an interview with Oliver Winterbottom: 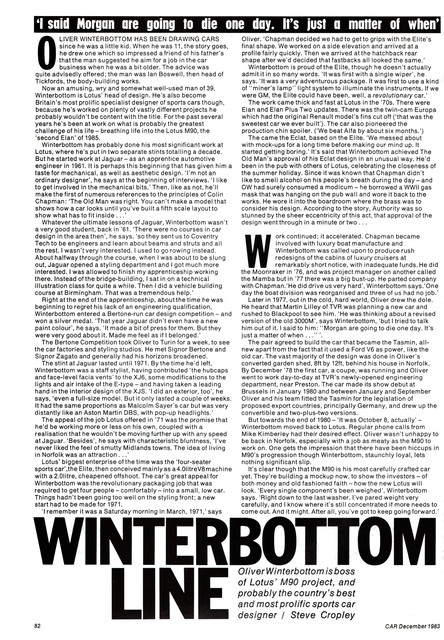 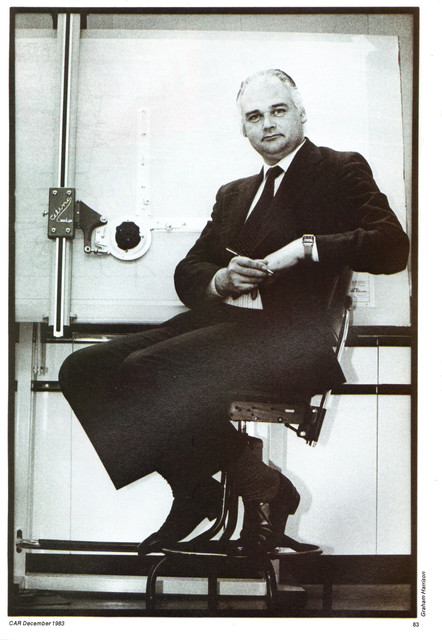 The March 1983 Car magazine ran a group road test called "Coupe War", pitting the Excel against a 944 and a Starion. Happily the Excel wins, although not by much: 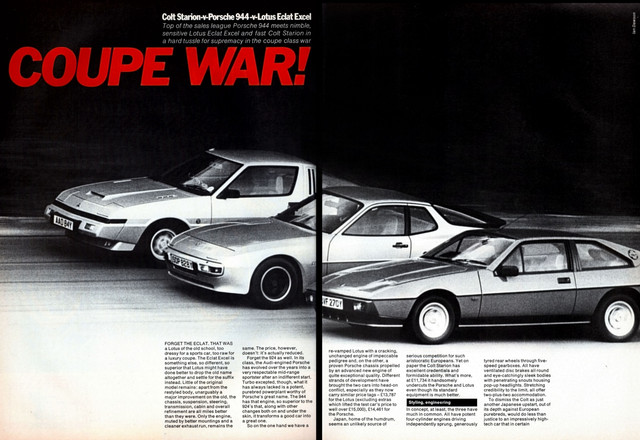 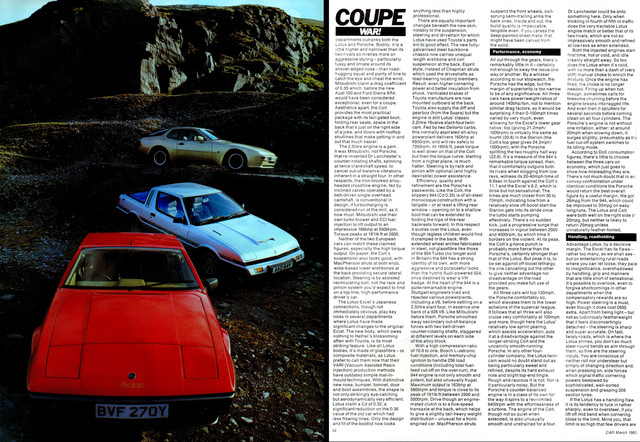 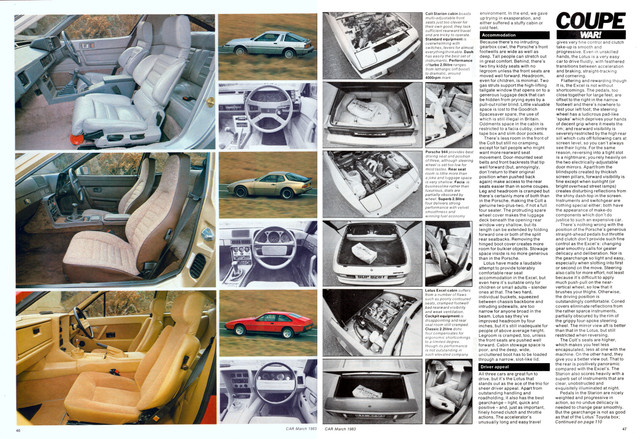 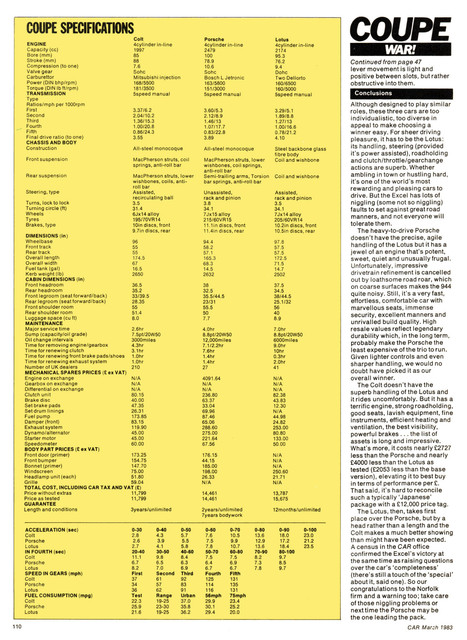 Interesting that the Lotus wins compehensively on handling, on 14" tyres. A Lotus suspension guy once told me that he preferred the 14 " tyres.

Bash
You are only young once but you can be juvenile all your life !!
Top

Yes I heard that too. Bigger side walls = improved ride
Umm! What to do next?
Top

I think low profile tyres universally seem to make the handling better and the ride worse. When I drive classics now with old fashioned high profile tyres they normally have an excellent ride compared with modern stuff. Handling's usually crap mind you. 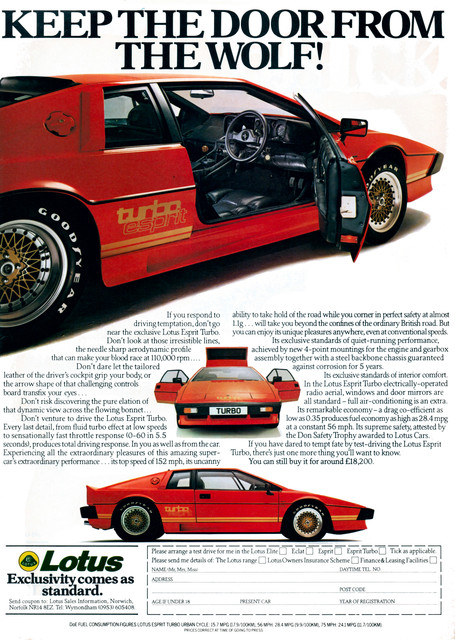 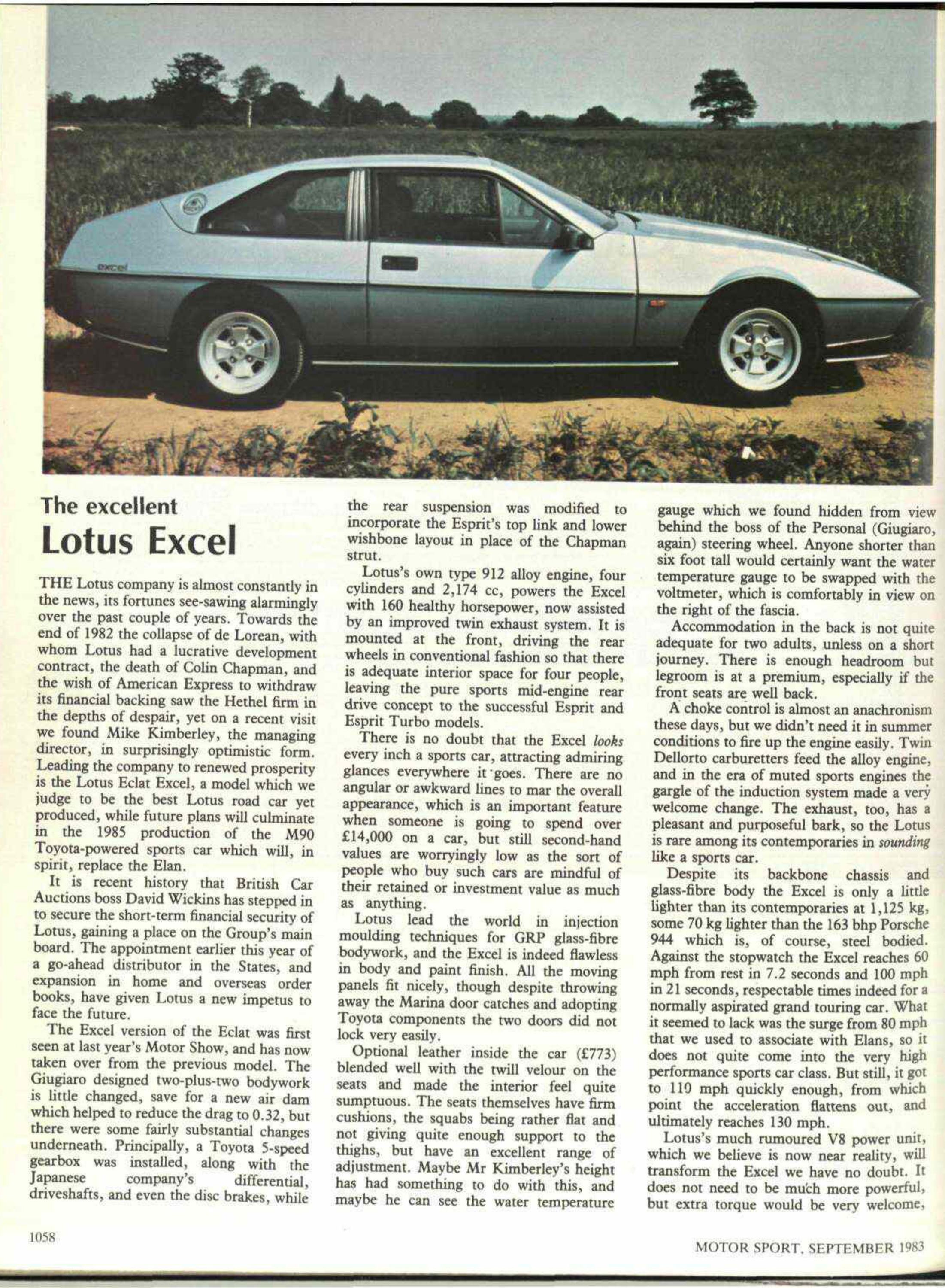 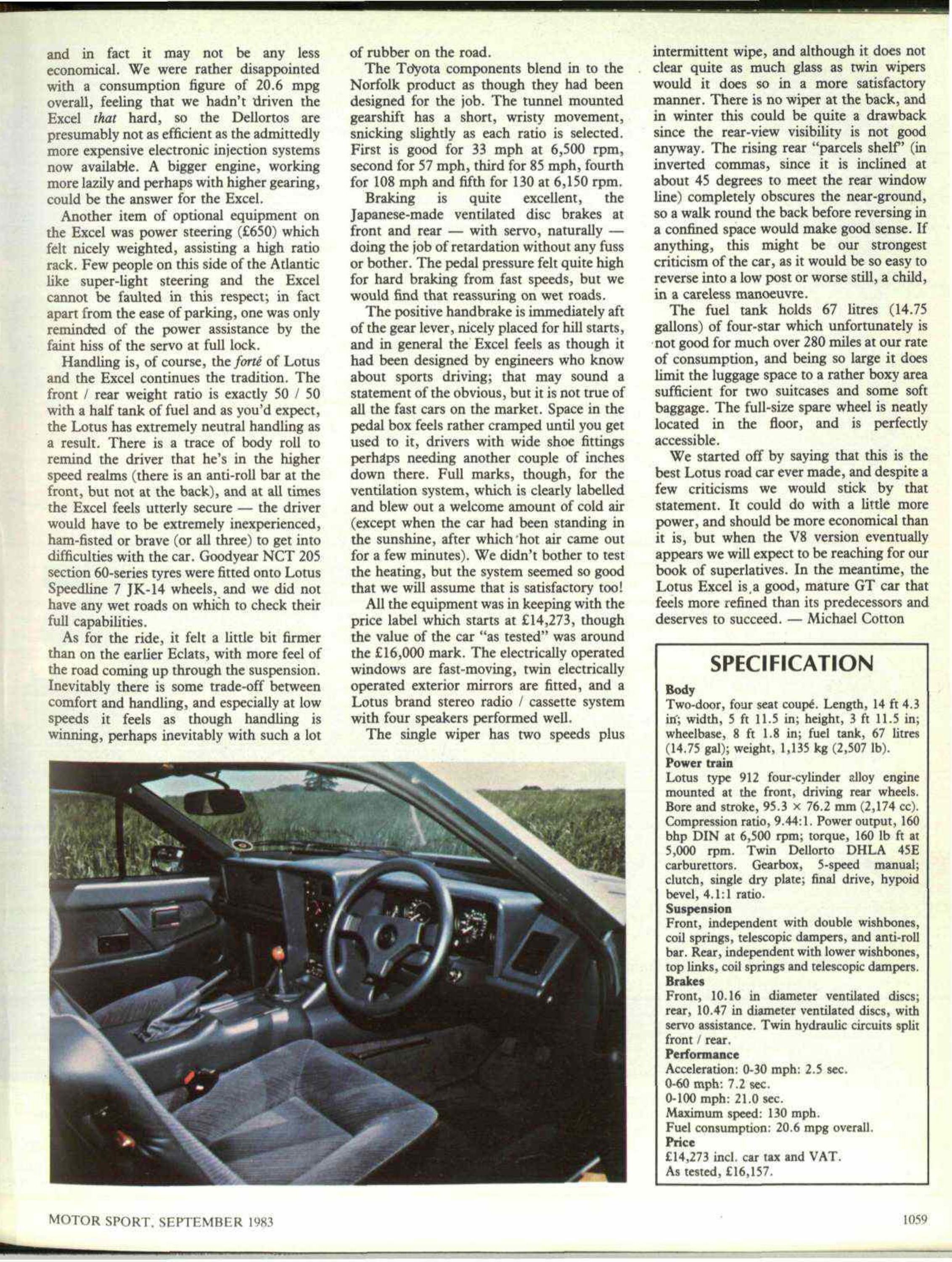 Umm! What to do next?
Top

tezzan wrote: ↑
Wed May 13, 2020 12:59
I think low profile tyres universally seem to make the handling better and the ride worse. When I drive classics now with old fashioned high profile tyres they normally have an excellent ride compared with modern stuff. Handling's usually crap mind you.


I agree re handling and ride. I don't think there is any good engineering reason for tyres to be as low in profile as they are today. After all, F1 tyres are hardly low profile - nor have they ever been. Mr Winterbottom always says that it is important to treat tyres as part of the suspension system, not as an 'accessory.' We are now used to cars looking 'better' cosmetically with big wheels and very low profile tyres; IMHO that is due to the greatly increased bulk of modern cars and SUVs where a properly specified wheel and tyre would look far too small. The size of the wheel and the very low profile mean that extra effort has to be made in the steering and suspension system to insulate the driver from road shocks - which reduces feel.

Before my Elite, I had a Porshe 944 which was much more fun to drive on the 195 section tyre option, but looked better on the 205 (or was it 215?) section tyre - the arches are so big on the 944 they need to be filled. It had a higher limit of adhesion on the bigger tyres, but felt as though breakaway would happen more suddenly. It actually felt quite 'wooden' in day to day driving on the bigger tyres.

Years ago I had a session in various AMG Mercs at MB World and wondered for a long time why, despite being so fast, they felt utterly boring! All the electronic handling controls meant you just couldn't approach the car's limits unless you switched the systems off.

Interestingly, in the Lotus world, at the talk on the Elan M100 at Castle Combe last year, someone recounted a tale of the dealer launch where the test runs around the track elicited surprisingly little excitement amongst the participants - the handling was so good they were afraid to push it as fast as they could have because the car's limits were so high - it just stuck to the track. I don't think the M100 has particularly wide or low profile tyres - its chassis dynamics are clearly so good that everyday drivers can rarely approach the limits.

So, unless you drive competitively on the track, I agree there is a very good case for driving an older car with skinny tyres in order to have fun!! And to my mind, RWD handling is much more fun than FWD.

These days that is because the tyre sizes are part of the prescribed rules. For the 2022 season (was due to be next year before the Covid-19 crisis pushed back the rule change) they are changing to more modern low-profile tyres.

Traditionally, before the rules set the tyre sizes, F1 tyres were not low profile because the tyre technology to make low profiles work hadn't been developed. If you wanted a good wide tyre for extra grip, then a higher sidewall was the price to be paid for it.

You are absolutely right that the tyres and suspension components need to work in concert. Both contribute to the stiffness, so if the tyres are stiffer the suspension should be more compliant to compensate, and vice versa. But the behaviour of a spring and a damper is more predictable and tweakable than a rubber tyre, so a suspension designer (particularly in F1) would prefer most of the compliance to be in the springs, which can be controlled, than the tyre, which is less controllable (particularly with a single tyre supplier providing the same tyre to everyone). Of course there are several further issues in F1, for instance how a stiffer shallower sidewall will affect tyre wear, which are not so relevant to road cars.

It's messing with the balance that makes things wrong - so fitting an incorrect tyre could screw up what the engineer was trying to achieve in either direction. It's just that there are many more idiots fitting over-stiff tyres to cars designed for "normal" tyres than there are people trying to fit compliant high-profile tyres to their M3 and then finding the handling is screwed.

Then again, if you are adapting a road car for track use and are happy to screw up the ride in favour of better handling, fitting low-profile tyres may be a legitimate step in doing this - if you know what you are doing!!
"Farmer" Richard

Ive just thought about this thread, great as it is and dont think im being namby pamby, are we sure we are not breaking copyright rules? it would be s**t if anyone got a bo****kig for doing it.
I REALISED YOU CANT LIVE WITHOUT A LOTUS!!!
Top

CHRISYD wrote: ↑
Wed Jun 10, 2020 20:14
Ive just thought about this thread, great as it is and dont think im being namby pamby, are we sure we are not breaking copyright rules? it would be s**t if anyone got a bo****kig for doing it.

You may be right - I've quickly checked and copyright expires after 70 years, and would apply unless it could be argued that the material is being used for research purposes.

Such scans are however widely available on the internet, so in practice we are not unusual. Also they are specific parts of a publication, not the full copy.

Is there anyone here with some legal knowledge who could help?