2019 is the 45th anniversary of the launch of the Lotus Elite!

The actual announcement date has kindly been confirmed by Oliver Winterbottom as Wednesday 15 May 1974. On that date, The Eastern Daily Press reported: “The Lotus Elite, a beautiful four-seater high performance touring car built at Hethel, near Norwich, and announced by Colin Chapman today. Top speed is 128m.p.h. and the luxury interior is the work of Guigaro (sic) of Turin. It costs £5445, or £5857 with air-conditioning and stereo tape deck.”

As reported by Graham Robson in “The Third Generation Lotuses,” this was not the Elite’s first ‘official’ appearance in the media. The announcement had originally been planned for week ending 17 March 1974, but at the last minute was pulled due to production issues following disruption due to the 3 day week at the time. However The Sunday Times magazine (not The Sunday Telegraph magazine as quoted by Robson) had already gone to print, meaning that the first Elite advertisement actually appeared on Sunday 17 March 1974, and I have fortunately found a copy – so here it is together with the magazine front cover: 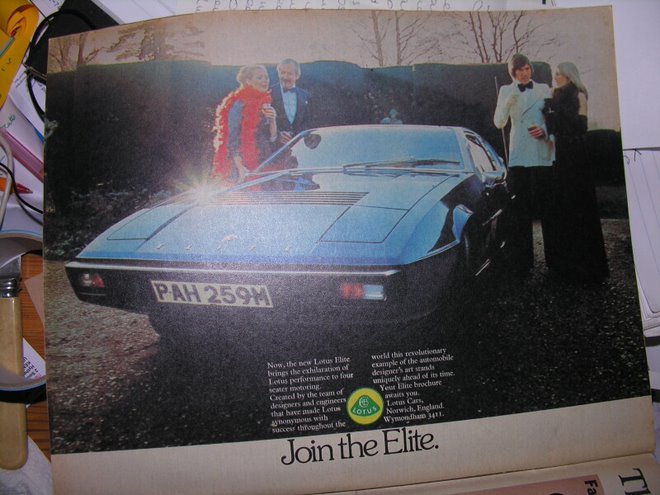 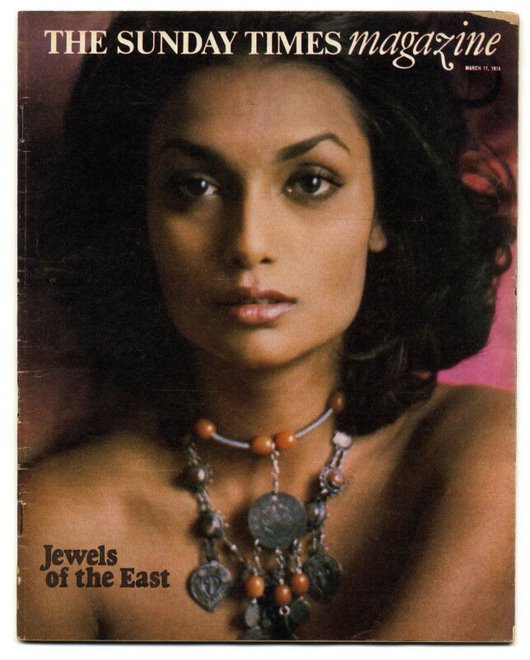 I’m hoping that we can put together an event to mark the occasion. We should also include the Eclat, as it started life as the Elite coupe, so should be allowed to share the birthday, and it is unlikely that another event could be organised for next year. I’ve already been in touch with a few Elite owners who are very supportive of the plan, and who agree about the inclusion of the Eclat. The favourite option at the moment is to drive to a venue reasonably close to Hethel; I'm in discussion with Ketteringham Hall at the moment. I will post a separate thread in the 'Events' section so we can track the development of our plans.

Richard thank you so much for doing this and also for having the foresight and good grace to include us ever so slightly younger siblings.

There may be an ever so small rush on the purchase of feather boas for the ladies.

Regards Ian
The Lotus Eclat, a lot like the English Whisky company: comes from Norfolk and better than you are often told it is.
Top

When should the party happen?

don.hasi wrote:When should the party happen?

The date isn't fixed yet Don. It would be nice to do something in May close to the actual launch date anniversary, but there are some great restorations under way that won't be ready by then, so realistically it could be September time.

Guys
just an idea......
Club Lotus are running their usual weekend at Castle Combe 25/26/27th May (the Bank Holiday Weekend)
the Lotus Elan M100 celebrates its 30th Anniversary this year too.......and 20 years of the LEC.....the M100 Club
their plan is to have a track parade on one of the days..........
I am an M100 Owner too and am....erm......a little involved in this
I have spoken to Mike Kimberley and he is keen to attend.....I have also spoken to Peter Stevens and he too is coming......
I believe that there will also be Phillipe Adams attending the event (Ex Lotus F1 Driver)
in addition to this there are parade laps for the M100 under discussion......
we are also hoping to get the conference suite at Castle Combe so that Peter can do one of his Lotus Design presentations.....
and in this also have a Q&A with MJK and Peter...........how awesome would it be to get Oliver Winterbottom and the Elite included in this?
they were both Mike Kimberley Projects so I bet he knows quite a bit too......
just thinking out loud as its very close to the date you have in mid-may
cheers
G
Top

He everyone, here is the most recent update regarding activities etc.

It is likely that we will celebrate the 45th at the Lotus Festival, which, assuming it happens, will be at Brands Hatch in September. There won't be another event at Hethel this year. Negotiations for Brands are under way at the moment. Once it is finalised, then I will contact all clubs in order to reach as many Elite and Eclat owners as possible.

The planned car sticker design is now done, and here it is:

Edit: no that isn't the sticker! OneDrive doesn't seem to be uploading correctly - I'll update later if I can fix it.

OK here we go again. This time I've scanned an image then uploaded it here, so the quality isn't great but you get the idea:

Looks great Richard. Love the use of the same font as the cars at that time. 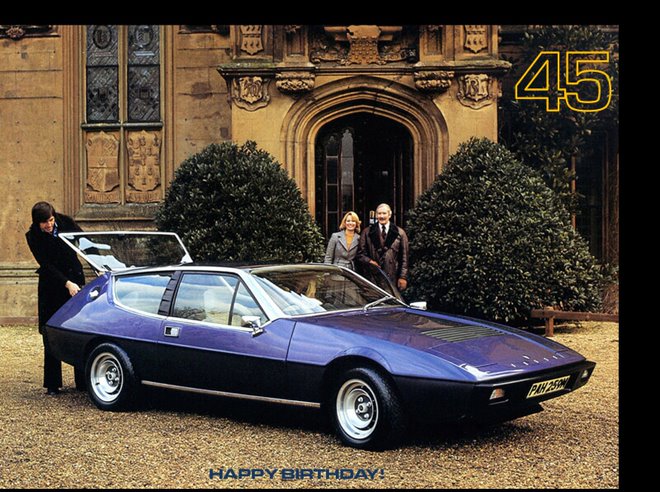