I thought I'd post this as a new thread rather than attaching it to the recent post about fuel tank breather location. Although it does cover that too, I've tried to cover all the pipework from filler to carbs.

Here's the filler, vent pipe and breather. Note the way the clear breather sags between the P clips with fuel collecting at the lowest point; 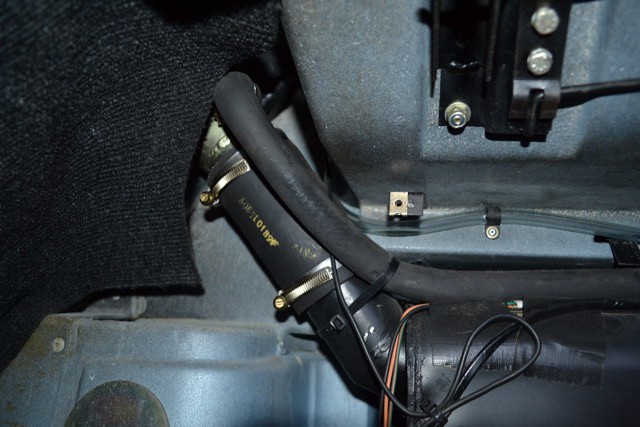 Another view of the vent pipe and breather; 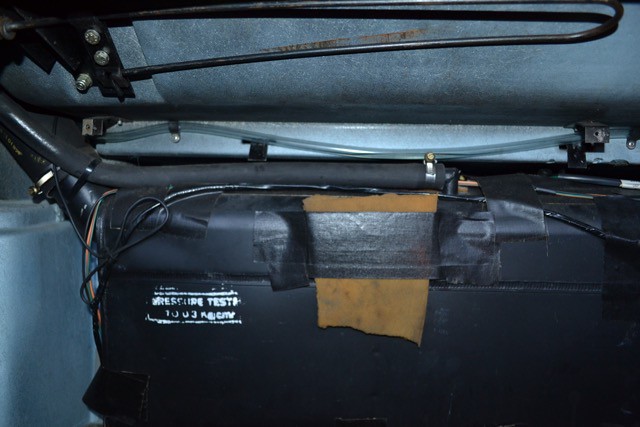 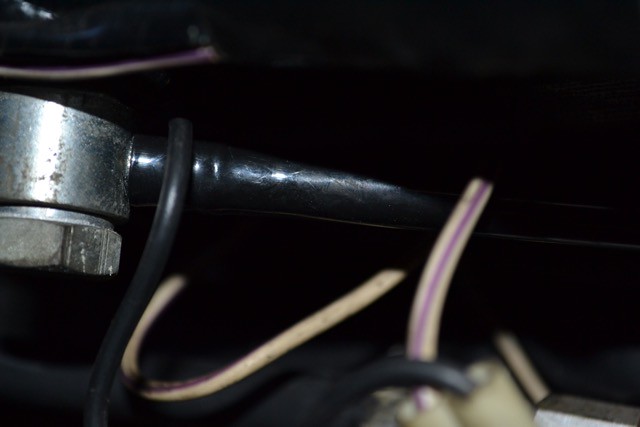 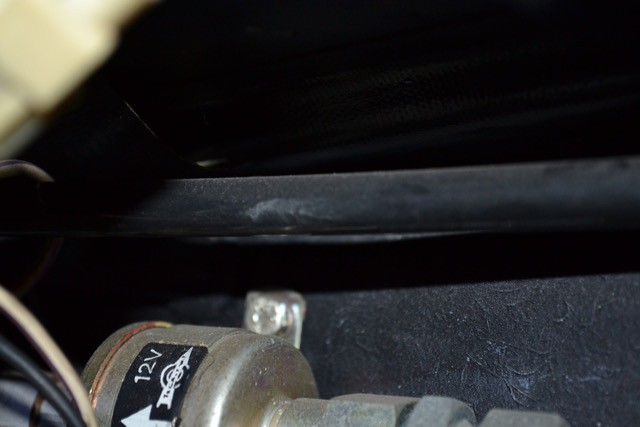 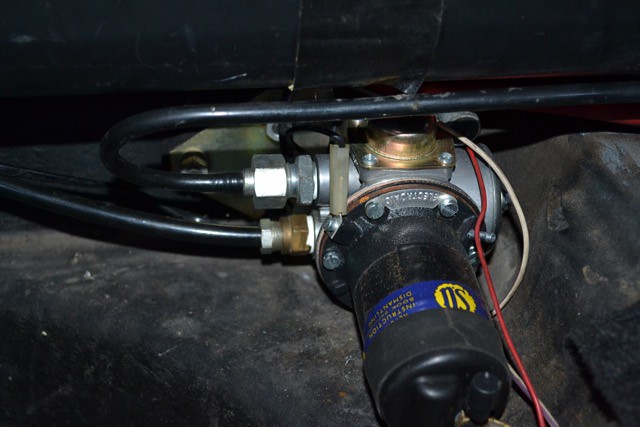 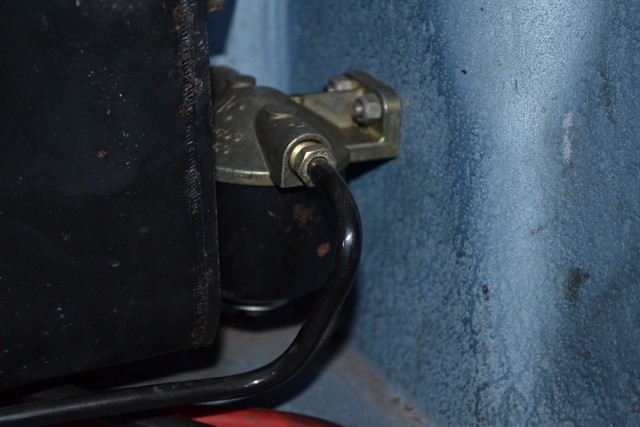 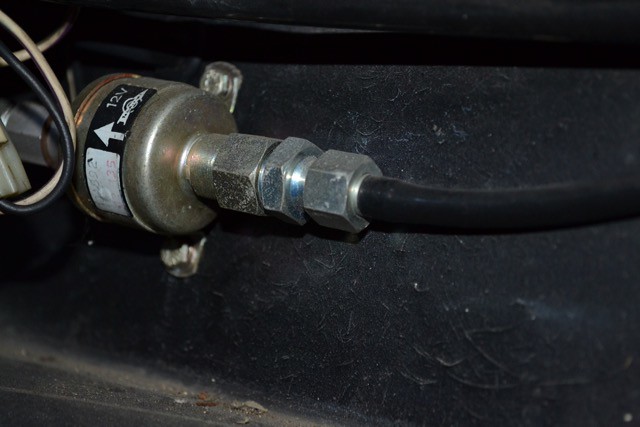 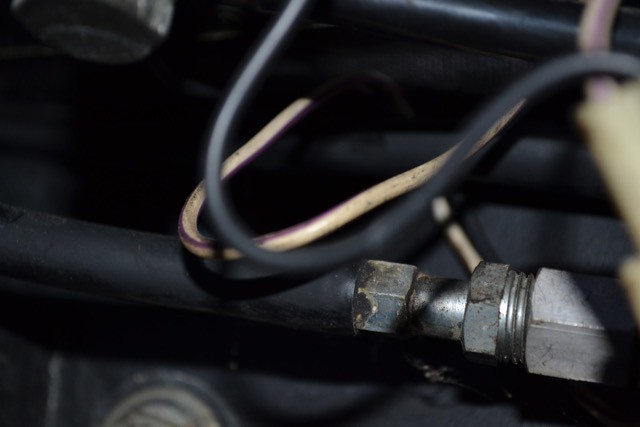 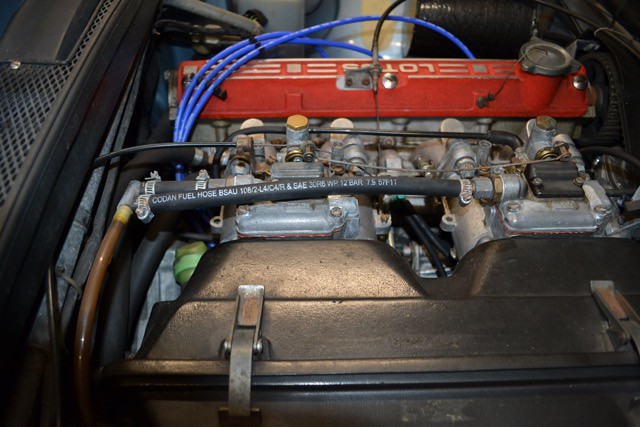 Alan_M said he reckoned the pipework is Teflon, and I believe that's the case with the following exceptions, on my car at any rate;
Filler and vent: large diameter rubber pipes.
Flowlock to the Teflon pipe that runs the length of the car from rear to engine bulkhead: mine appears to be rubber.
Engine bay bulkhead to carbs: rubber.
Clear breather pipe in boot: not sure what this is made from.

The ones that concern me are the short lengths of rubber pipe from flowlock to long Teflon run, and from bulkhead to carbs. I'm going to replace them with J30R9, easy in the engine bay, but probably messy and difficult to access at the rear.

Also the clear breather which I routed as per original, and I can see why these rot as fuel collects and sits in the pipe. I'm going to re-route mine to the spare wheel well as done by Hawaiis0, don't know why Lotus didn't do that unless they were concerned about it getting damaged by the wheel or it exited too close to the exhaust system? I may take it to the front of the well and drill a new hole for it, and try to maintain a downward gradient along the full run, to stop the fuel collecting in the pipe.
Finally, I spoke to Eurocarb about the use of E5/E10 fuels in Dellorto carbs. As confirmed by Zaphod, they said should be OK with fuel up to E10, but they did say to try and use E5 if possible. The biggest problem is when fuel is left standing in the system for too long. They said the ethanol eventually separates and you wind up with pure ethanol coming into contact with your fuel system. This can damage plastic, rubber and even the float bowl. It would be useful to know how long it takes for the ethanol to separate, I'll try to find out!

Finally, I spoke to Eurocarb about the use of E5/E10 fuels in Dellorto carbs. As confirmed by Zaphod, they said should be OK with fuel up to E10, but they did say to try and use E5 if possible. The biggest problem is when fuel is left standing in the system for too long. They said the ethanol eventually separates and you wind up with pure ethanol coming into contact with your fuel system. This can damage plastic, rubber and even the float bowl. It would be useful to know how long it takes for the ethanol to separate, I'll try to find out!


If you don't use the car in the winter i'd try to get rid of as much of the Ethanol as possible before storage (run it nearly empty, fill up with the good stuff etc)
Top

I, too, have been following Harry Metcalfe's advice by filling up with fresh V Power (E5) over winter.

From time to time in the past I have had fuel smells in the boot and it was cured by just slightly tightening the jubilee clips on the filler pipes. Also, I changed the clear tube for fuel hose. Since then Ive fitted fuel injection so all my hoses are braided and suitable for e85 so are ethanol proof. Ive re routed the high pressure and return hoses under the car, one either side of the chassis, located to the outside of the chassis lip between the chassis and the body.


Bash
On a mission to find the airspeed velocity of a european swallow.
Top

Thanks guys. I hadn't thought of tightening those filler jubille clips, good advice. Even once I'd replaced the breather there was still a faint whiff of 4 star in the boot! Must try that tip.

Regarding ethanol separation from petrol so far all I've learned is that ethanol is hygroscopic and likes to get together with water, and once it's managed that to a certain degree it parts company with the petrol and you wind up with some pure ethanol in your system. As Marten suggests, fill up with E5 if the car is going to be stood for a while. A near empty tank of stale E10 is probably best avoided, but I'll try to get more info about this ethanol separation issue.

I've read in several places (one from someone who really should know) that for the last 12 months and for while yet ESSO 99 is actually 0% ethanol (but labeled as E5) in the South East and Midlands of England.
Top

Sometimes the tanks get micro pin holes from rust if the car was at some point left unattended for many years. Is your tank sound?
Top

Very fortunate where I live. There is a fuel station called Local Fuels that do E0 fuel. If I do have to use E5 I use a fuel additive that is supposed to help.
The Fuel garage is based in Bexhill, East Sussex.
Top

I think my tank is sound, but worth checking when I look at the filler jubilees.

Teflon is blindingly expensive, thus would never have been used by Lotus
Teflon will also stay pure white forever, and is not translucent
It could be a nylon, but my feeling it is some poly oly something that you cannot pronounce

Fair comment, probably nylon then. Whatever it is, it seems to hold up well!
Top

Personally I would avoid braided because you can't see what state the rubber tube is in - certainly in the engine bay at any rate, where a leak would be of more concern given proximity to distributor and hot engine bits.
Top

Teflon is everything but nuclear proof. I have not ever seen a failure. Brake lines over 30 years. Fuel line over 35 years
For the rubber style the braid keeps the sun off, and I honestly have not seen it die on cars over 25 years old.
The only downside for teflon/braided is heat. Teflon will cold flow and on my+2 I had to change the clutch line away from the teflon because it is so close to the exhaust that it cold flowed right out of the fitting.
I don't think we have a similar situation on the Excel
Top

Agreed, braided hose is fine as long as the underlying hose is ethanol proof/resistant. And you're right, Teflon hose is on the good list, along with a few other options. But for me when it comes to those hoses that run from the bulkhead to the carbs, I'm sticking with unbraided. Just a personal preference, I want to see the state of the hoses.

I found this article helpful, posted on the MG Car Club and incorporating data from the Federation of British Historic Vehicle Clubs;
https://www.mgcc.co.uk/e10-fuel-what-you-need-to-know/

Although some reference to "J30R something or other" would have been useful!