Water pump - to gasket or not?

Water pump - to gasket or not?

It looks like my leak at the water pump is from between the pump and engine. 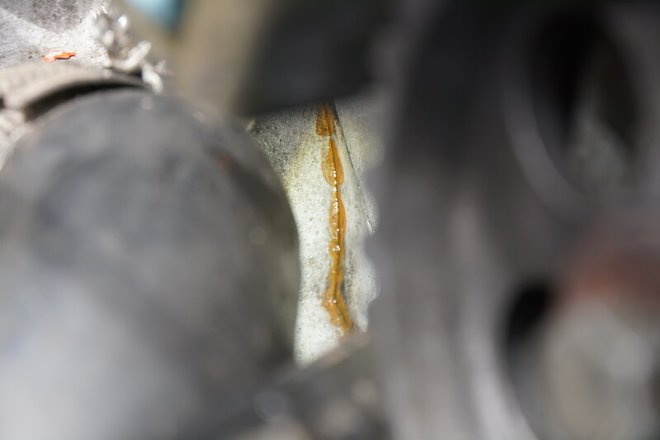 Now I think a confession that this is self inflicted. I was going to remove the pump to check/clean it and cracked a couple of bolts loose and then tried to get to the one behind the auxiliary pulley, but couldn’t get anything on it and the auxiliary pulley didn’t seem to want to come off, well not like the pulley from the cams. So gave up and retightened the bolts.

Now my question - I assumed there would be a gasket, but from 85 they stopped using a gasket and changed to Permabond A136 sealant, but on SJ’s parts listing it advises to still use the gasket even on post 85 cars.

What have others done? Gasket on its own, gasket with something else like Hylomar advanced or stuck with A136 or used an equivalent ( I have some Loctite 518 which comes up as an equivalent).
Top

I like high temp silicone for that one. 518 will be OK if the flanges are really good. A136 is a better gap filler.

So do you mean something like this - BLACK HIGH TEMPERATURE HT SILICONE ADHESIVE SEALANT 70ml HEAT RESISTANT 300'C new https://www.amazon.co.uk/dp/B006C65ZCO/ ... C5SZN7NCPW would be the best thing to use. I always worry with silicone about putting on too much and it breaking
off internally and heads off around the water ways to possibly block something.
Top

I use gaskets for all 9XX 4-cyl applications, regardless of what the Lotus manual says. I've experienced leaks with pumps that are sealed with an anaerobic sealant only, so rather than mess with it anymore, I just put a standard gasket in the joint and seal it with Hylomar AV. It seals well. I'm an Esprit guy first, and working in the gap between the engine and the firewall just makes things more difficult. Hylomar is easier to clean off next time, anaerobics are a pain in the but to remove, and Wellseal / Permatex Aviation Form-a-Gasket are somewhere in between. But if there's no clear advantage to something other than Hylomar for this application, why use something that is a pain to clean off next time.

Theree's an aftermarket gasket that is fuzzy black on both side with a foil laminate core (I know JAE sells it, I'm not sure who else). Note that anaerobic sealants will NOT cure in the presence of that gasket.

Also, anaerobics will not cure on a surface that has previously had silicone sealant on it. So, if you're thinking of going with silicone, make sure you're ready to turn your back on the anaerobics.

So do you mean something like this - BLACK HIGH TEMPERATURE HT SILICONE ADHESIVE SEALANT 70ml HEAT RESISTANT 300'C new https://www.amazon.co.uk/dp/B006C65ZCO/ ... C5SZN7NCPW would be the best thing to use. I always worry with silicone about putting on too much and it breaking
off internally and heads off around the water ways to possibly block something.

That looks fine. The reason it breaks off and heads into the engine is that it's hard to apply in the correct amount straight from a tube like that. I put the silicone into an adhesive dosing gun with a calibrated nozzle - quick tests with different sized nozzles will tell you how wide a given bead will be when squashed. Have a look at Adhesive Dispensing Ltd's site - their TS-series syringe guns.

I didn't know about the silicone/anaerobic thing that Tim mentions. I'll look into that!

Just my opinion, but I avoid using silicone sealants on engines, When you tighten the joint, and a little silicone oozes out, you can easily wipe off the excess. No big deal. But whatever you see oozing out on the outside of the joint, you can bet there's a similar amount on the inside. And while the 'ooze' might form a bead a millimeter-plus wide, the film in the joint is only about 0.0015" / 0.038mm thick. And it's only the thin 'edge connection' between that thin film and the fat bead that holds the bead in place. Over time, heat-cycles, and vibration, those beads break off and enter the oil... or coolant. The worst they'll do in the cooling system is plug the radiator. But I hate to count the number of 9XX engines I've opened, only to find the problem and damage at hand was caused by the oil pick-up screen being almost totally plugged by little rubber beads. I've seen it too many times. As a result, I simply will not use silicone in/on an engine. That's just me.

Tim, thank you for your reply and I too don’t really like the risk of bits of silicone heading off into the engine, so it will be a gasket and Hylomar AF.