I've been losing coolant (slowly), and there was clear evidence of the culprit - or at least a culprit. A brown streak ran down the outside of the coolant tank, pointing to a small leak letting the rusty water dribble down the outside.

Having had a nice chat with Mike from Lotusbits at the NEC show, and heard the price of the lovely shiny aluminium expansion tank he'd bought along, I decided to fix the old one!

First job, wire brush in a drill to take off the paint and clean up the metal in the location where the brown streak originated. This showed not one, but three small craters: 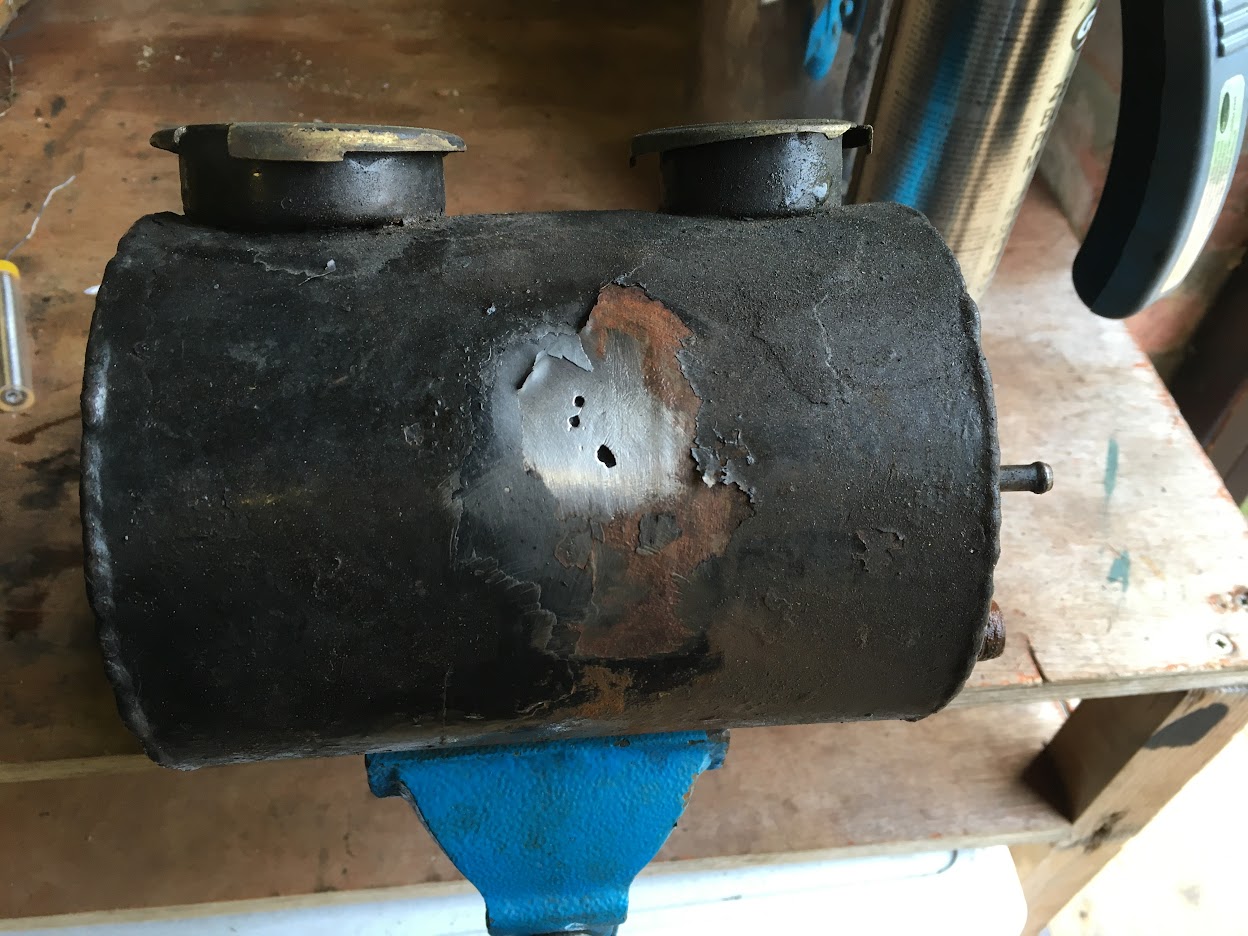 Not having any brazing or welding equipment - or indeed skills - my plan was to fill the craters with solder, then file / wire brush to a tidy finish afterwards. I heated up the metal nicely with a blowtorch, but the solder didn't want to take in the holes. Still, it was willing enough to adhere to the clean metal around the holes, so the plan morphed to a less elegant solution where a blob of solder would sit over the holes. This seemed to work OK: 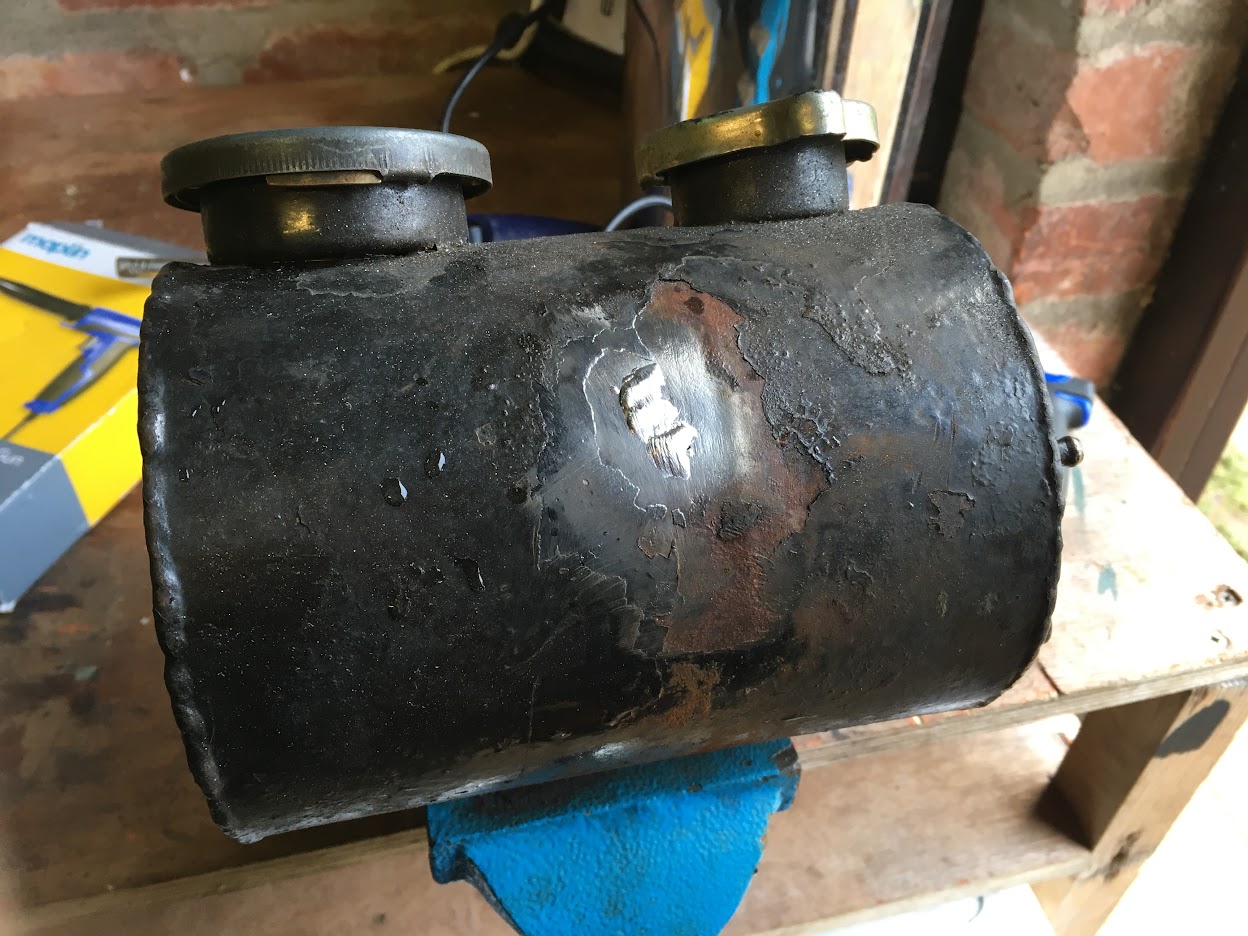 I thought it was worth testing this, so I stuck it in a sink full of water, covered the large pipe with my hand, and used a bicycle pump with a conical nozzle to put a little pressure into the tank: 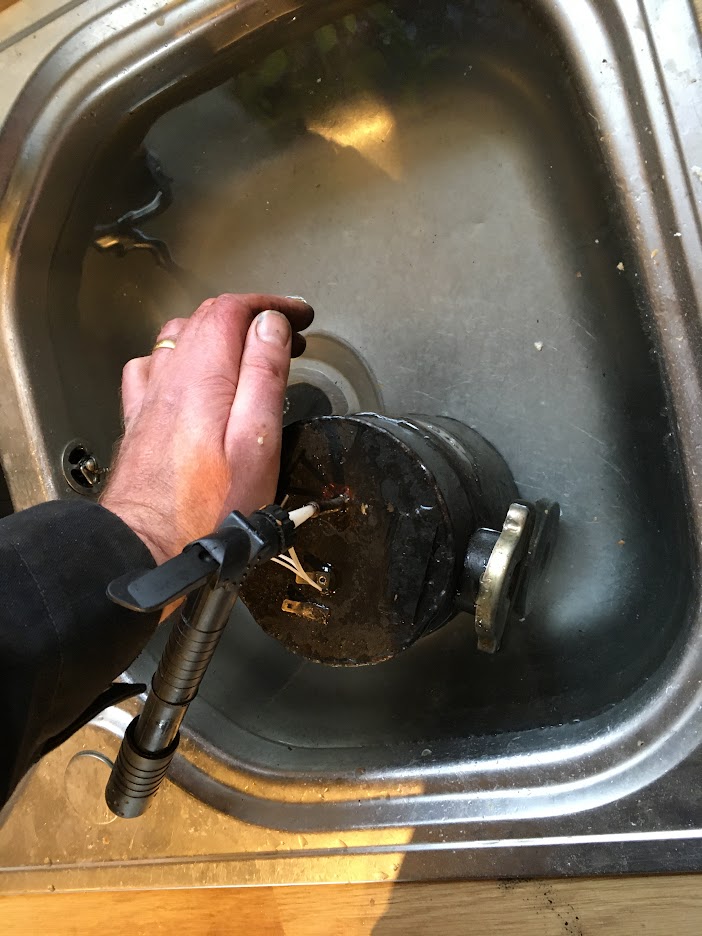 This confirmed that, indeed, I had failed to seal the hole. So I had another shot, and this time it was more successful. It also identified that the rear cap was leaking, so a new one of those is on order.

A quick wire brush to smooth it down a little, then a coating of Hammerite on the affected area (which had already been used to repaint the whole unit when I did the engine rebuild 4 years ago). Doesn't look perfect, but it's black so it doesn't show up! Back in the car, and my cheap repair is ready to go... or at least it will be when the new cap turns up.
"Farmer" Richard

Don't you think it would be worth while stripping all the paint off to see if there are any other pending holes? My tank is also starting to leak very slightly where the filler neck meets the tank. I also enquired at the show about the Lotusbits tank - think it was £200

Worth trying to fix it before shelling out that sort of cash..
Cheers, Phil
Never take life seriously, nobody gets out alive anyway!
Top

You may be right Phil... time will tell whether or not my laziness costs me more time further down the line.
"Farmer" Richard

The rusty steel header tank issue was one of the reasons I justified the expense of converting to waterless coolant.

Now; no more rusting, no pressure cap needed and the cost of an Evan's conversion is less than a LB SS tank - just!

Solder and Hamerite is a lot cheaper mind you.

Good idea on soldering the tank - that's about my level too ( c rap at welding but good at soldering).

rbgosling wrote: ↑
Tue Dec 14, 2021 21:14
my plan was to fill the craters with solder, then file / wire brush to a tidy finish afterwards. I heated up the metal nicely with a blowtorch, but the solder didn't want to take in the holes. Still, it was willing enough to adhere to the clean metal around the holes, so the plan morphed to a less elegant solution where a blob of solder would sit over the holes. This seemed to work OK:


Most common available solders are formulated to be pretty free flowing, so they will not bridge gaps. One solution is to tin the edges, and then to revert to body lead which has a wide melting range and can be worked with a wood spatula in the semi molten state. Or you can knock the hole inwards with a ballpeen hammer to recess the surface, tin the edges and solder in a patch ( steel or brass) cut to shape.
Top

Every day is a school day, I didnt know, or realise, that about lead solder. Cheers marten
Bash
On a mission to find the airspeed velocity of a european swallow.
Top

Well, I guess that lasted about 8 months... 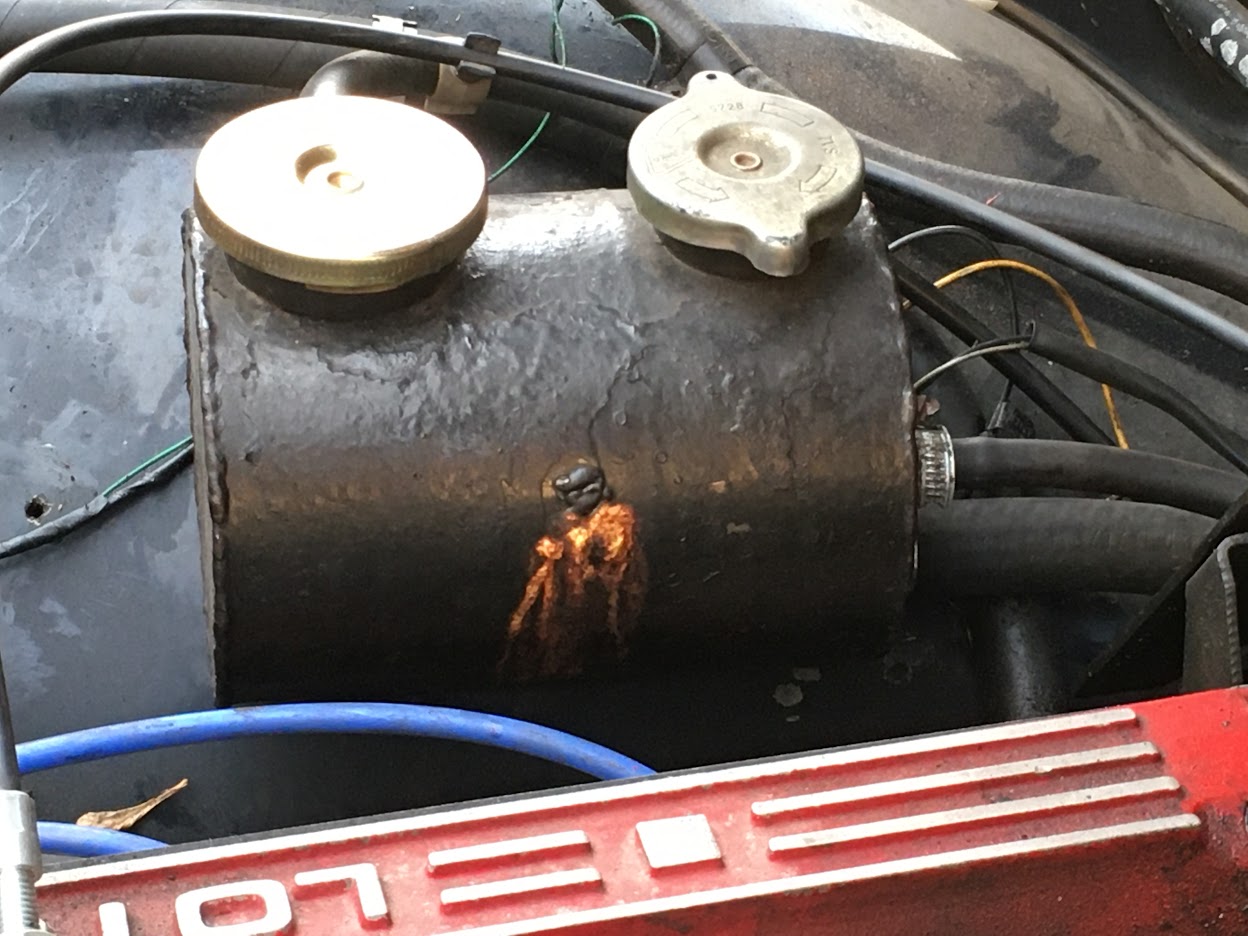 Probably time to give up on fixing it, I see a trip to Lotusbits in my near future. Shiny expensive new aluminium one, or take my chances on a far cheaper used one? At the moment I'm erring towards the latter... my Lotus budget is not looking too flush right now, and I need a couple of new tyres pretty urgently too!
"Farmer" Richard

I thought people who looked into the future used a glass ball, didnt know that in the modern age header tanks were used. Do you do tarot readings too using a service manual.

You might not like the idea of this but it will work, give the outside a very good clean, cut a patch of thin metal and stick it on with jb weld or similar. It will stand the heat and after a bit of paint will hardly be noticeable. A bodge, or, a running repair ???
Anybody know what temperature petrol tank sealer will stand ?

) on the carburettor of my Calivalier Sports Hatch, a round 1cm disc disc had fallen off permanently allowing more air into the carb by by a valve type thing.

So at this time I had access to a substance called "Double Bond" a two part metallic putty, easy to mix, very strong, water proof and heat resistant. Covered the hole up, smoothed it down and it even looked like it was meant too be there. Was only done to get the car running properly again as I had a replacement carburettor that just needed servicing.......however the temporary repair was still in place when I sold the car 5 years later !!

Can't find the actual stuff as it was over 30 years ago, but this stuff seams to be similar:

I did something similar, when mine had the lotus engine in it it developed a leak from the outer part of the power steering pump (my fault) when I was 350 miles from home in Cornwall. So I cleaned it off with carb cleaner and blobbed some araldite on the small crack, all without laying a spanner on it. It was still there when I removed the engine and Im still using it on my v8 in the same state at least 12 years later.
Referring back to my stuck on patch theory I would make it the same size as a period advertising sticker, I dont think anyone would spot it then.

Richard - I'll have a look at the one that came off my Excel 15 years ago. Can't remember how good it was. I'll see if I can dig it out today.

Mine has a small pinhole in it as well - plus I moved the mounting bracket to allow a different fixing position, so not much help I'm afraid!

Thanks Pete, I appreciate you checking that.

Ok, I’m inspired to take another shot at plugging the hole before I give up. I had some epoxy stuff I used to patch the fuel tank on the Mitsubishi Grandis I once had, that might be the right sort of stuff.
"Farmer" Richard

Some years ago, I had a two part filler , think it was called LeakFix.
Looked exactly like body filler - (and it probably was, just with a different badge. !). It was definitely rated for moderately higher temperatures you'd need on a cooling system.
Or try the epoxy Metal fillers that can be moulded ( and supposedly even tapped).
Tony
What goes together.... Must come apart.
Top
Post Reply
19 posts