I can't see them either.

Pretty sure no one can.
What goes together.... Must come apart.
Top

rbgosling wrote: ↑
Wed Apr 08, 2020 09:37
More disassembly on Tuesday. Got the front cover off, and removed the rails and forks. Got the 5th gear assembly off the countershaft no problem with my basic 2-arm puller.

The next step, according to the video, is to move the reverse gear off its splines on the main shaft, which will give access to the screws holding in the retainer plate for the main shaft. He did this by whacking the end of the main shaft - see from 26:20 in the video. Well, this didn't work for me, the reverse gear stayed stubbornly put with no sign of movement at all after several enthusiastic whacks with a lump hammer.

Fortunately I have made a friend via a local classic car Facebook group, he lent me the engine hoist and also has a hydraulic press he is willing to lend. I'll need it anyway to get the 5th gear off the main shaft, so hopefully I can find a way to use it to shift the reverse gear too. That's the next plan, for Wednesday.

In the third photo, see the amount of rust on the bolt that broke while splitting the gearbox, still sticking out of the front housing (at the back of the workbench). Odd this, as the other 8 were clean as a whistle. But if this is what stopped the bolt turning then there may still be a chance of getting it out - I'll give it a try.


Here are the photos from Post 5 again. Hope you can see them this time. My photos are hosted on Google Photos - dunno if it makes a difference if the viewer has a Google account and if they are logged into it?? Can you see all the photos on the other posts? I can still see the photos on Post 5, but maybe that's just me 'cos they're my photos... 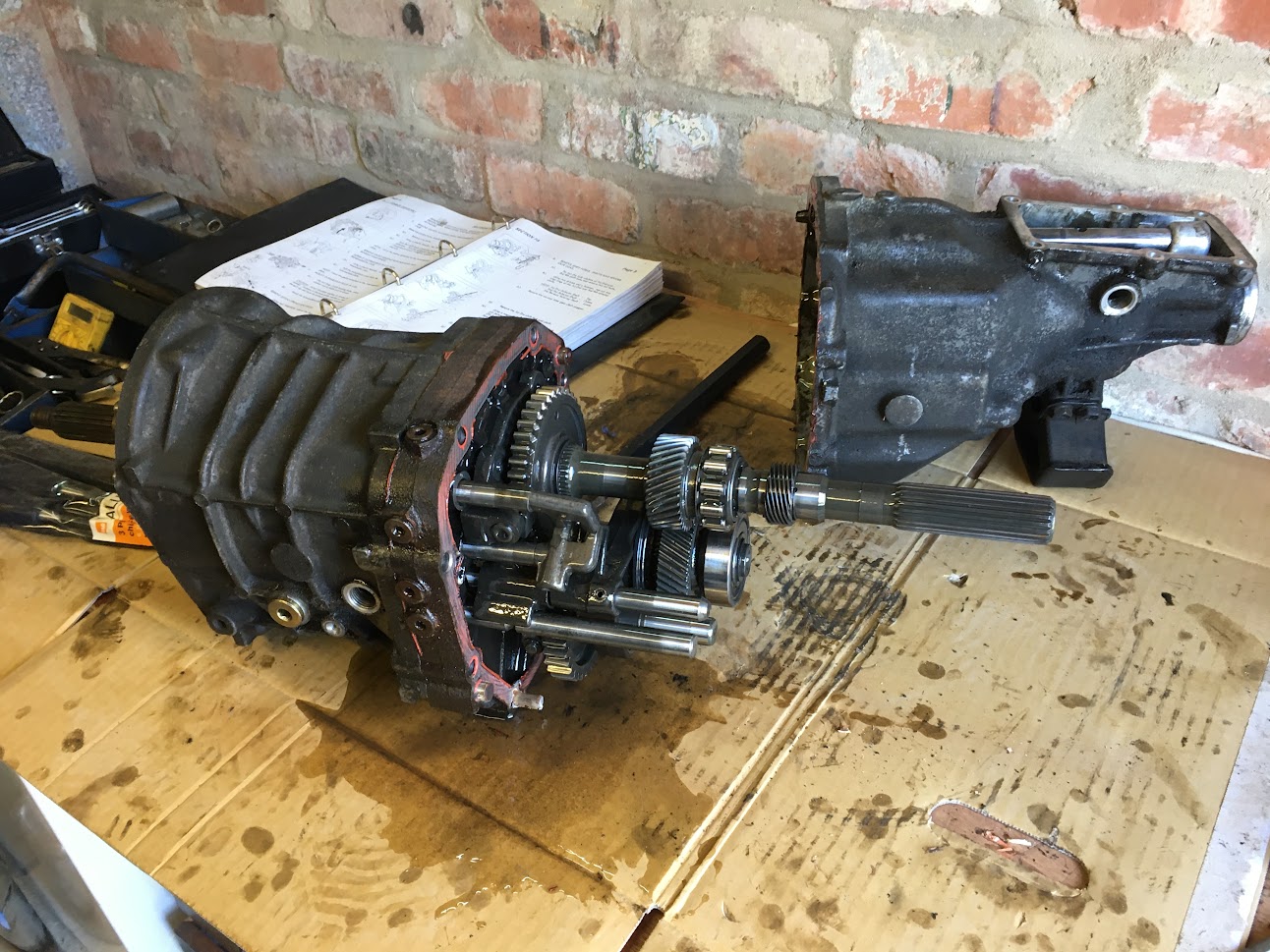 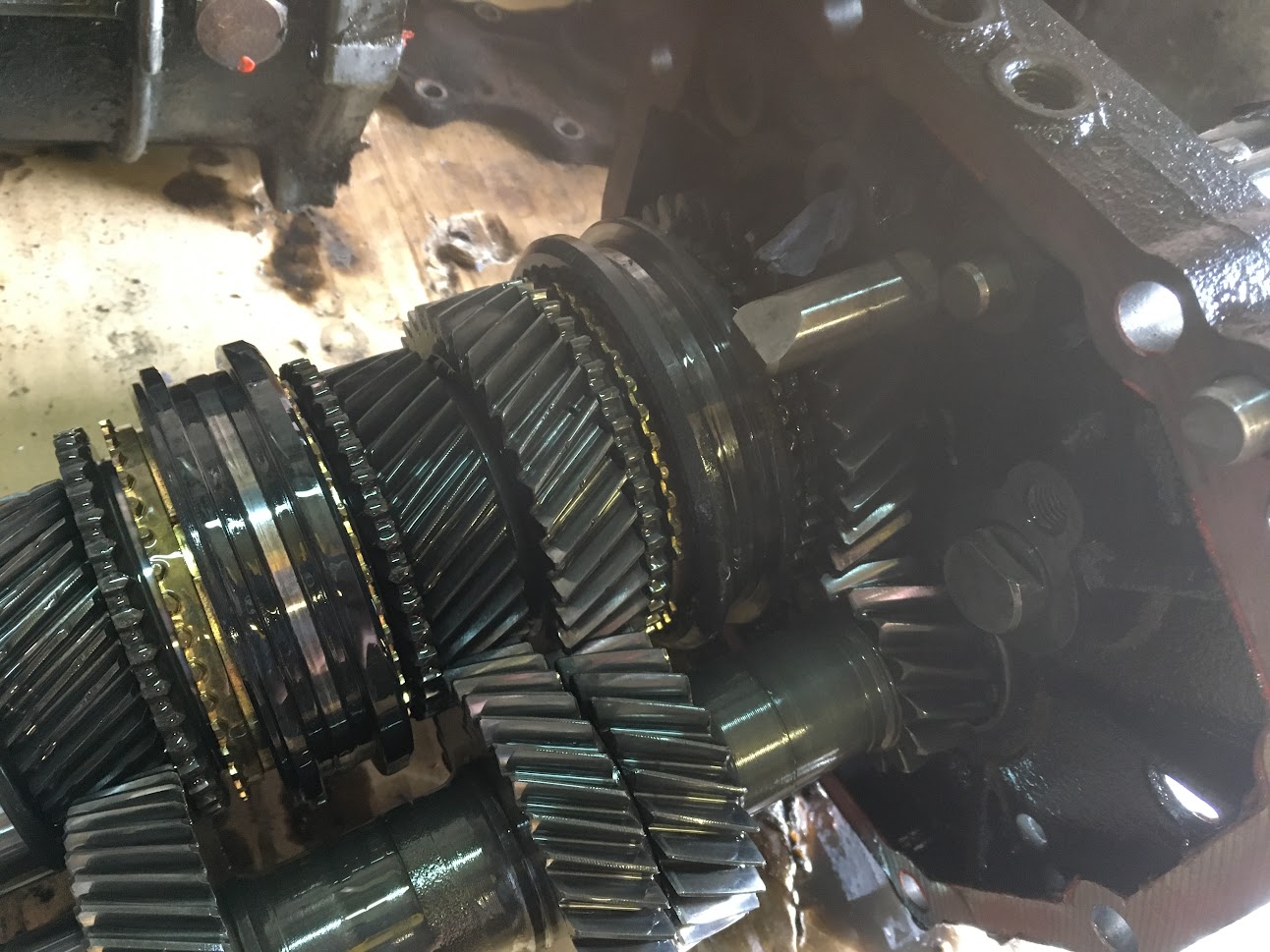 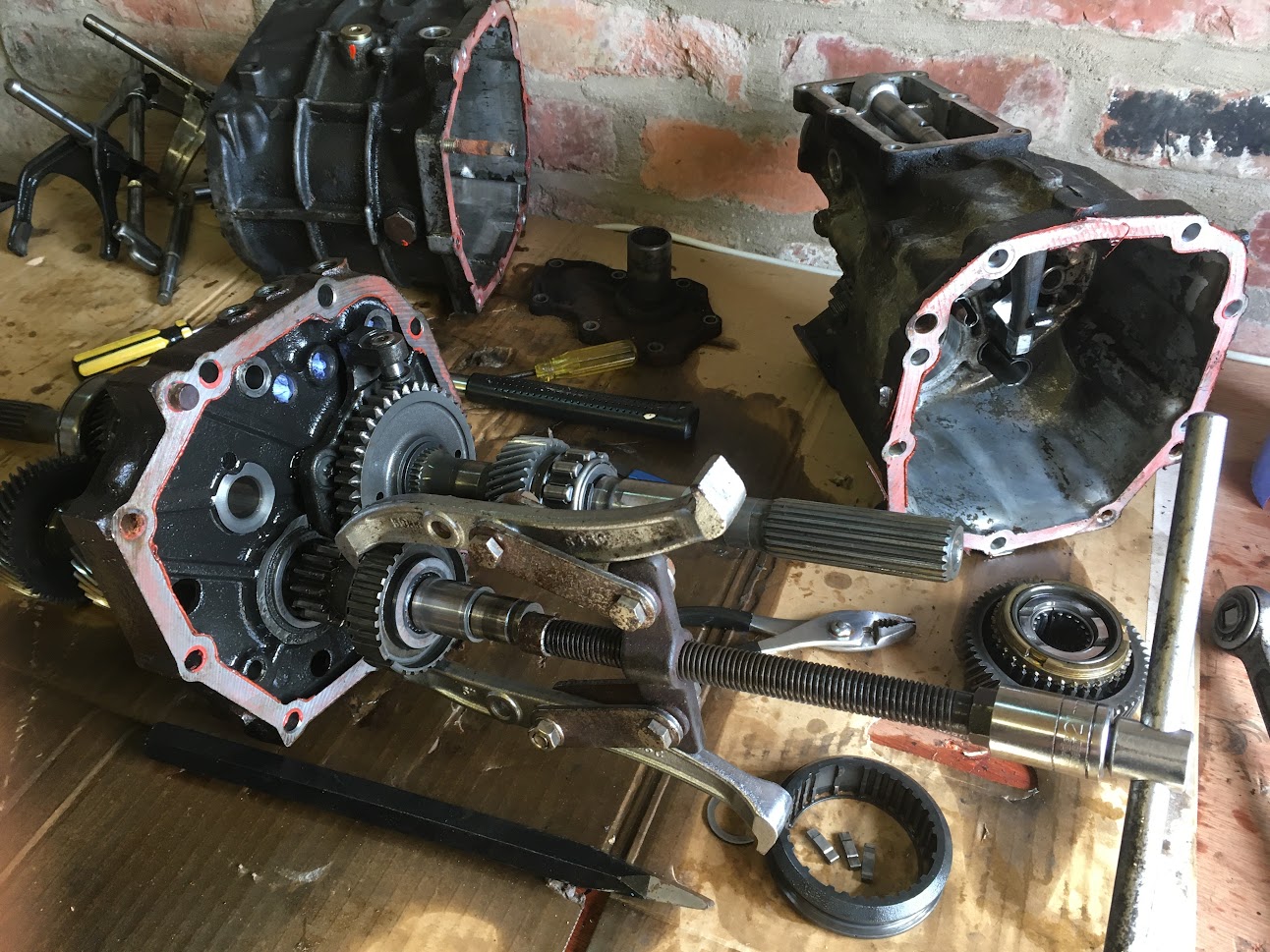 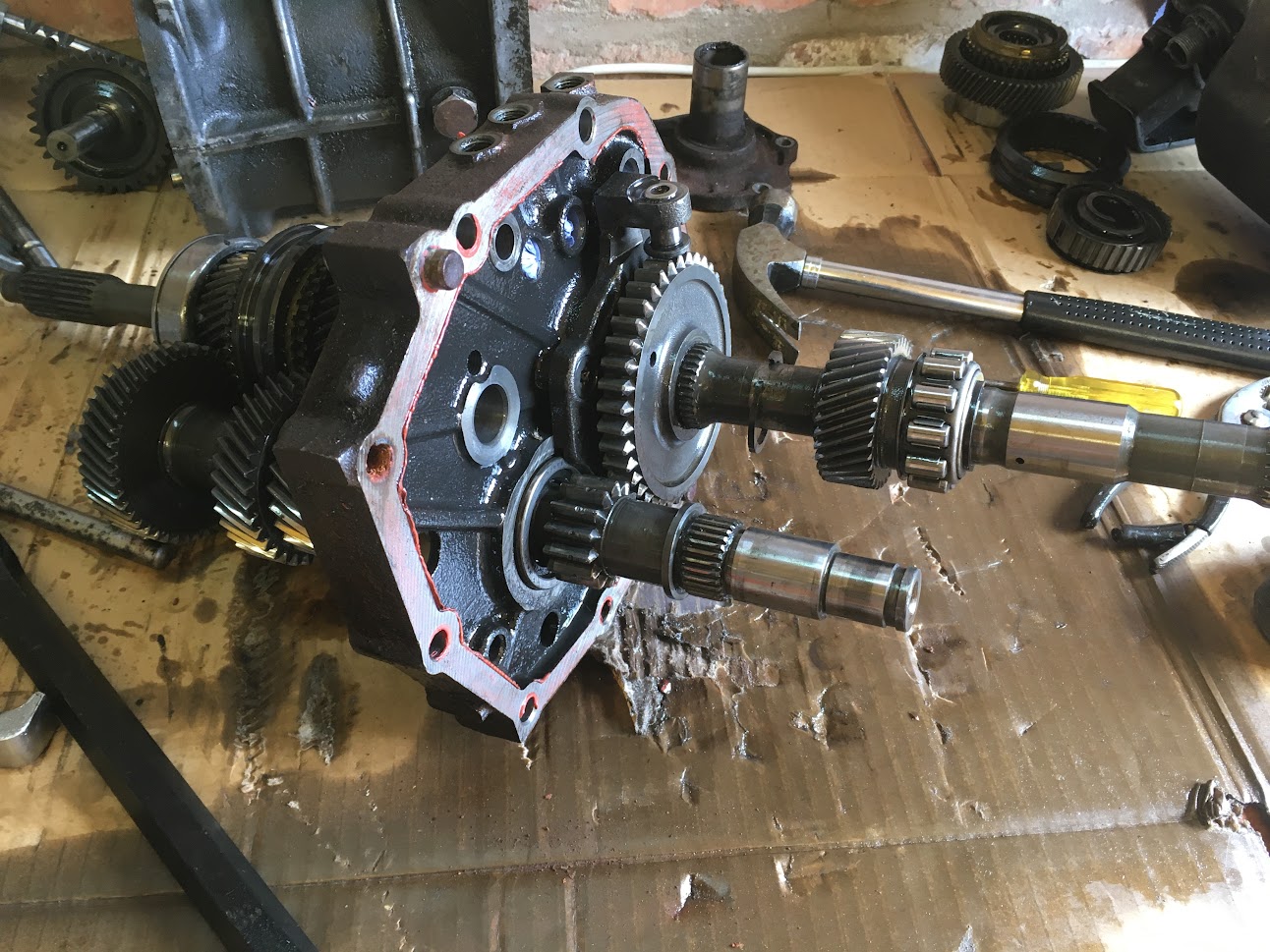 It's all back together!

Initially a slight hiccup - the gear changer was jammed, which necessitated taking the rear cover off again. Turns out the rail for 5th/reverse was pushed by the rear cover when it went on, putting the 'box in reverse, but with the selector in the wrong position. After a few tries it kept doing this. The trick that worked for me was to Putting a bit of oil on the end of the rail to help it slip into its hole probably helps too.

Then I got the bell housing back on, clutch fork and (new) release bearing back in, and bolt it all up to the engine!

It'll be a few days before I can drop it back in the car - I found two exhaust manifold studs were missing when I pulled the engine out. I ordered some replacements off eBay, they turned out to be too long. For some bizarre reason the length used to describe them in the listing included the long threaded end and the unthreaded middle, but not the short threaded end - who defines a stud length that doesn't include the full length??? So those are on their way back to the seller, some new ones are on their way, but delivery of almost anything takes a week at the moment. 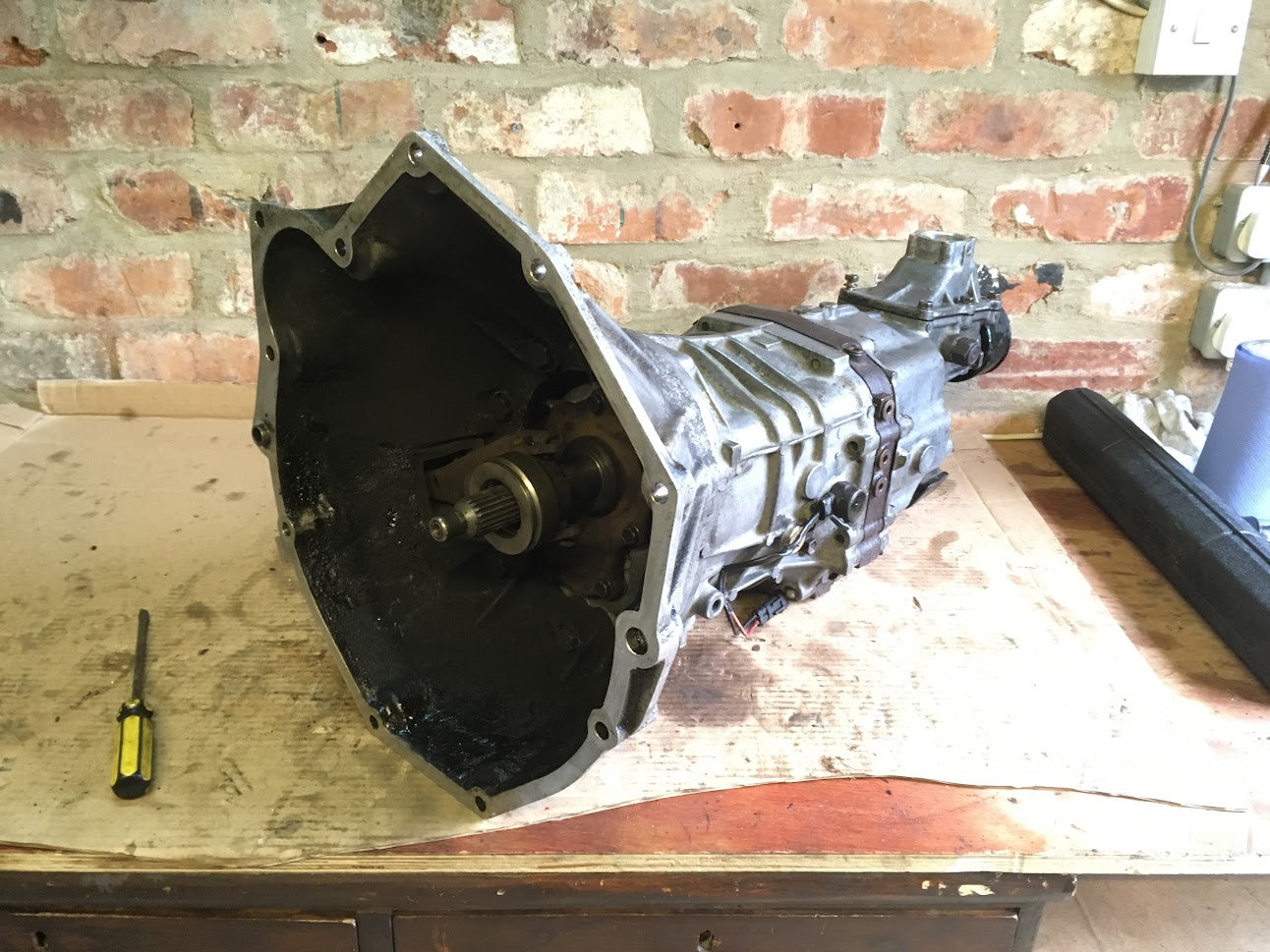 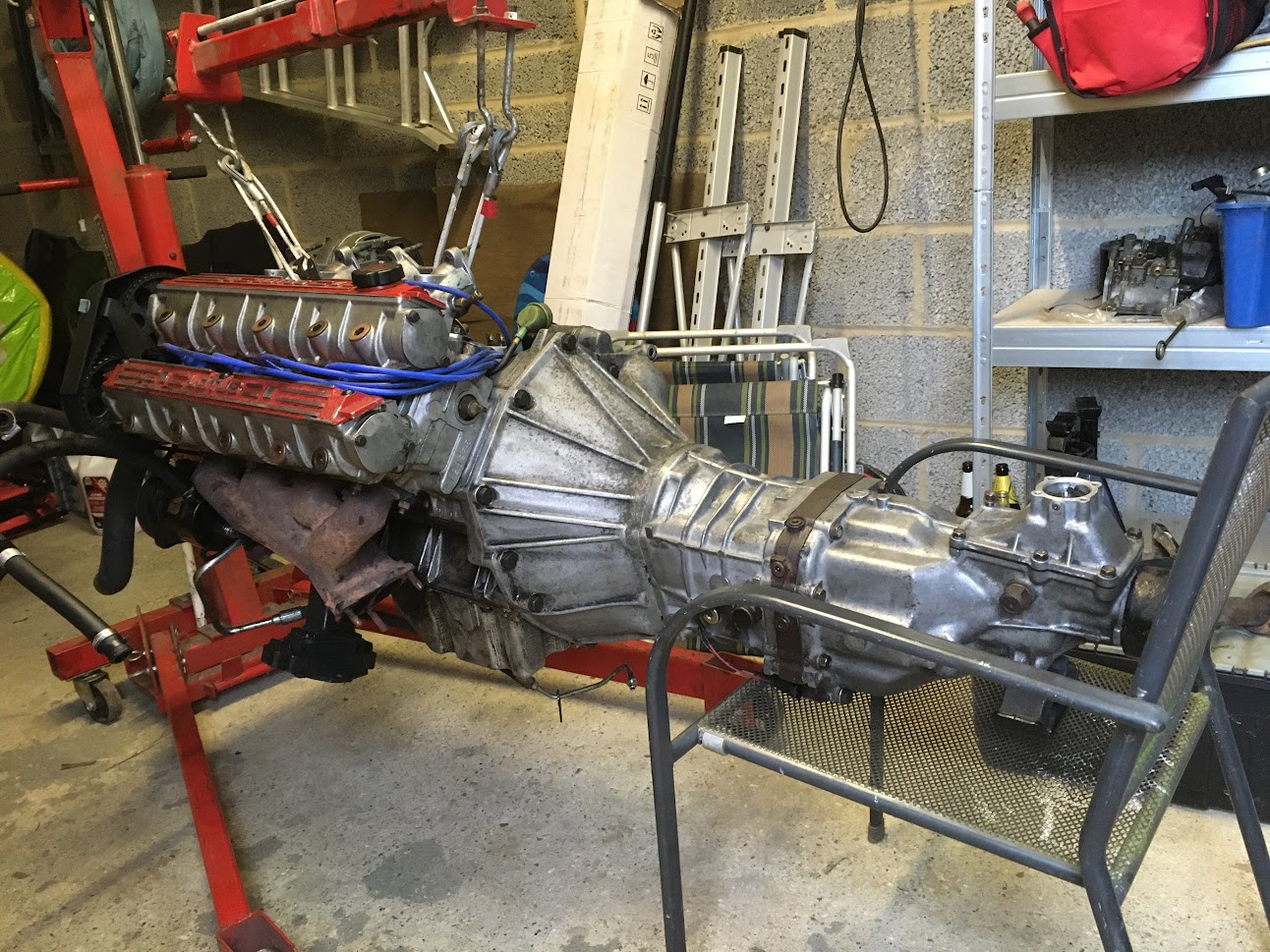 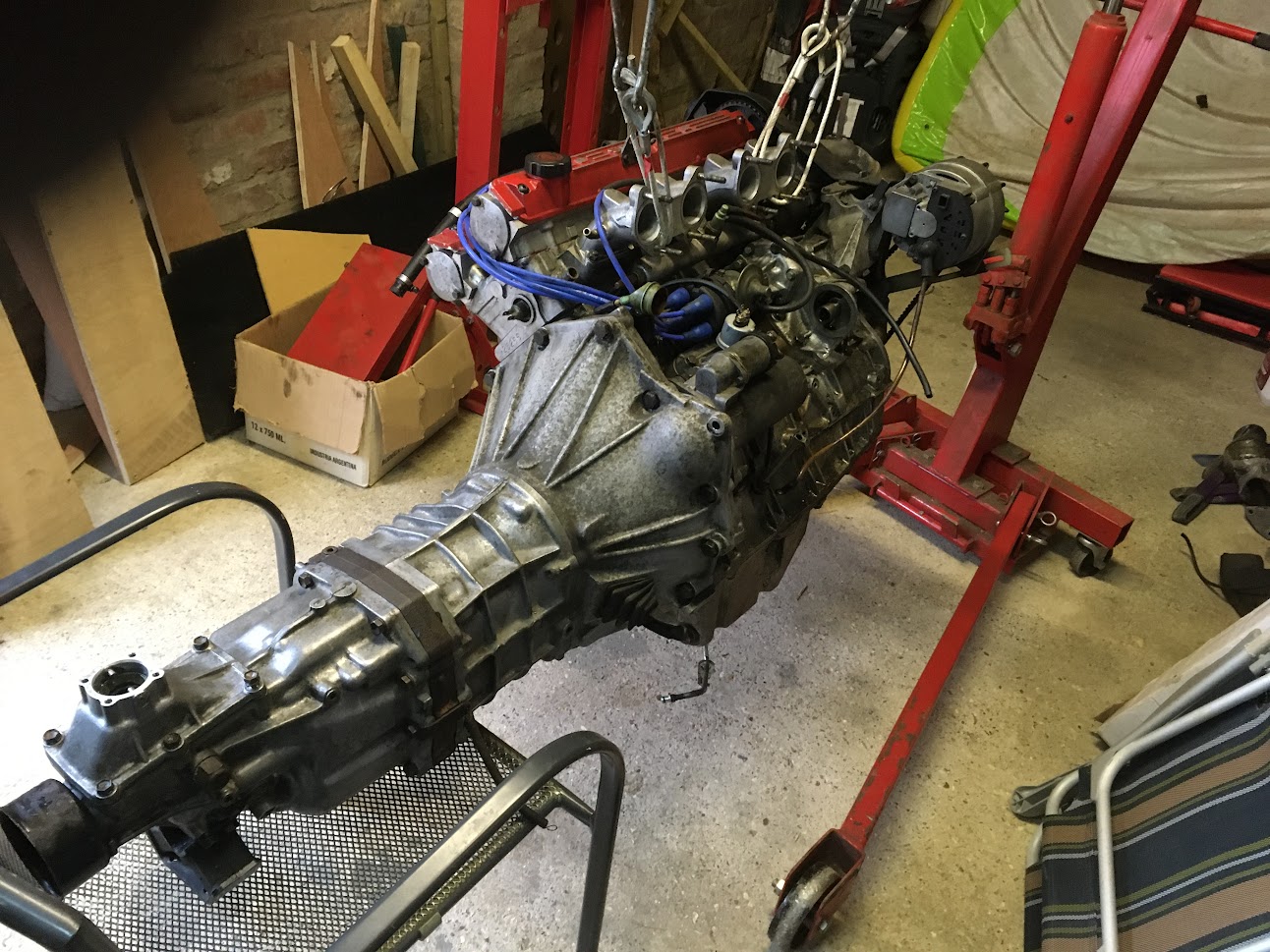 Off-topic - and none of my business anyway - but are you really wearing red nail varnish in the first few photos?
-- hodders

I rarely complete a job on a car without a quick blood test.
Tony
What goes together.... Must come apart.
Top

What happens in lockdown, stays in lockdown. Unless you accidentally share it with the nation on a permanent internet forum...

(I have two small boys, too young to have bought into the "social norms" that say nail varnish is only for girls, or goths. Sometimes it is fun to indulge them!)
"Farmer" Richard

At least that proves someone can see my photos!!
"Farmer" Richard

The exhaust manifold studs arrived on Saturday, but I was too busy having fun with the kids to get any engine work done. Sunday the studs went in, then the engine/gearbox went back into the car, with the assistance of wife and both children! Good fun trying to line up three gearbox mounts, propshaft and exhaust manifold-to-downpipe all at the same time...

Rest of the afternoon, and a little of Monday morning, connecting up everything and getting the carbs on and topping up with six different fluids. Fired up first time (let the 4-y-o have the privilege of turning the key), and a quick test drive up and down the lane showed no tendency to jump out of gear - all good!!

Now I just need to give it a wash, then put it away until I get to drive it to work again, whenever that happens... 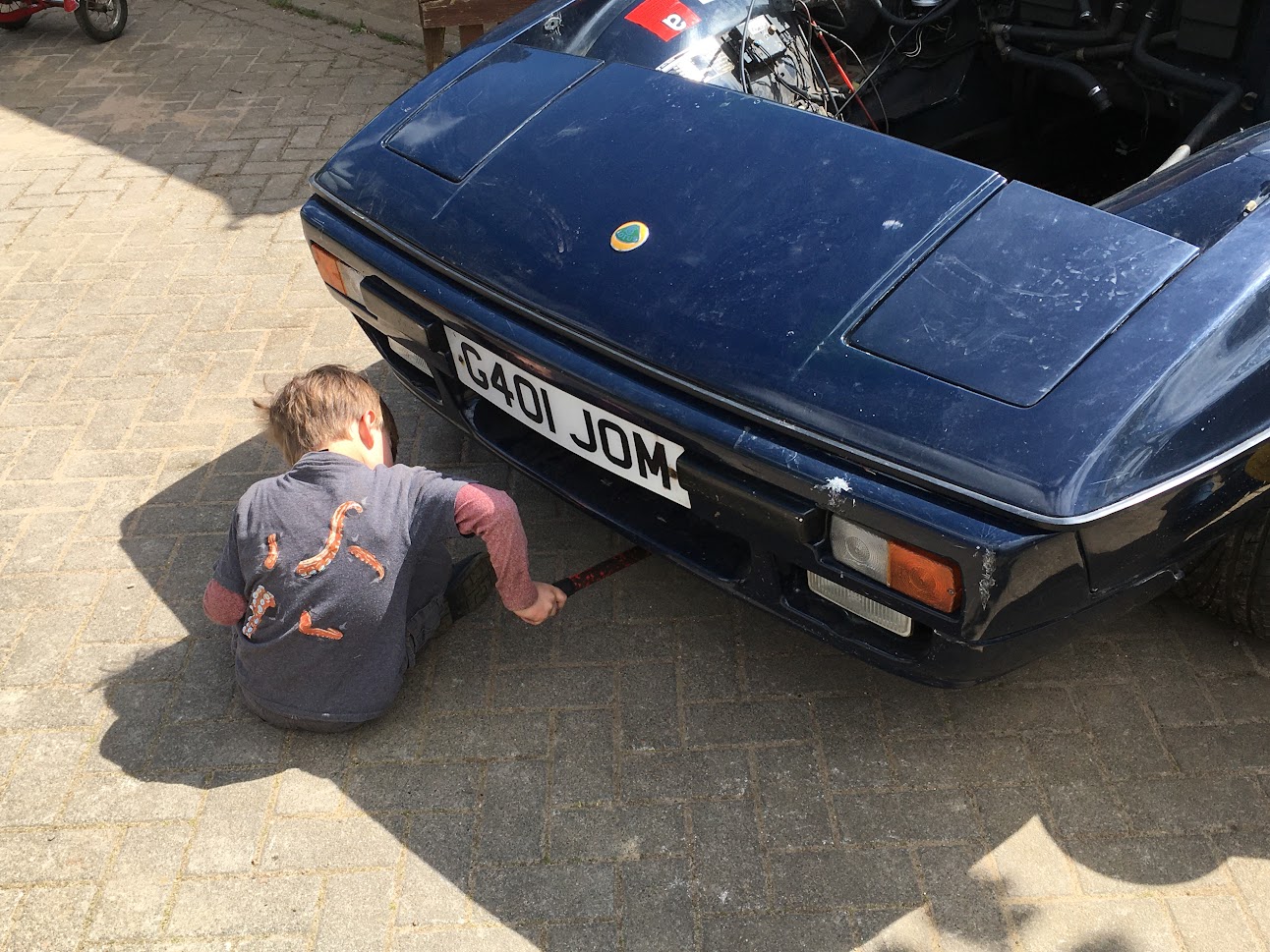 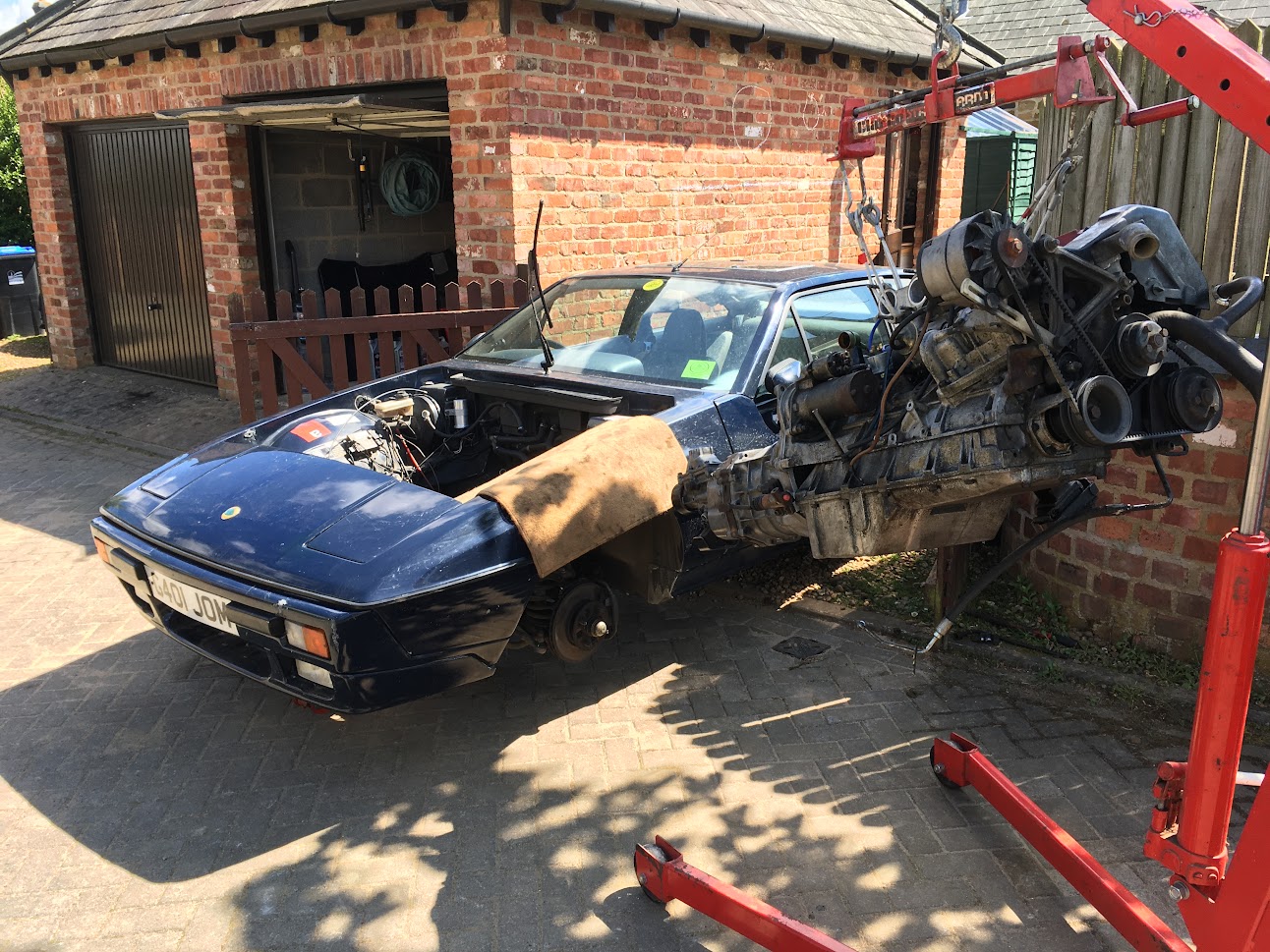 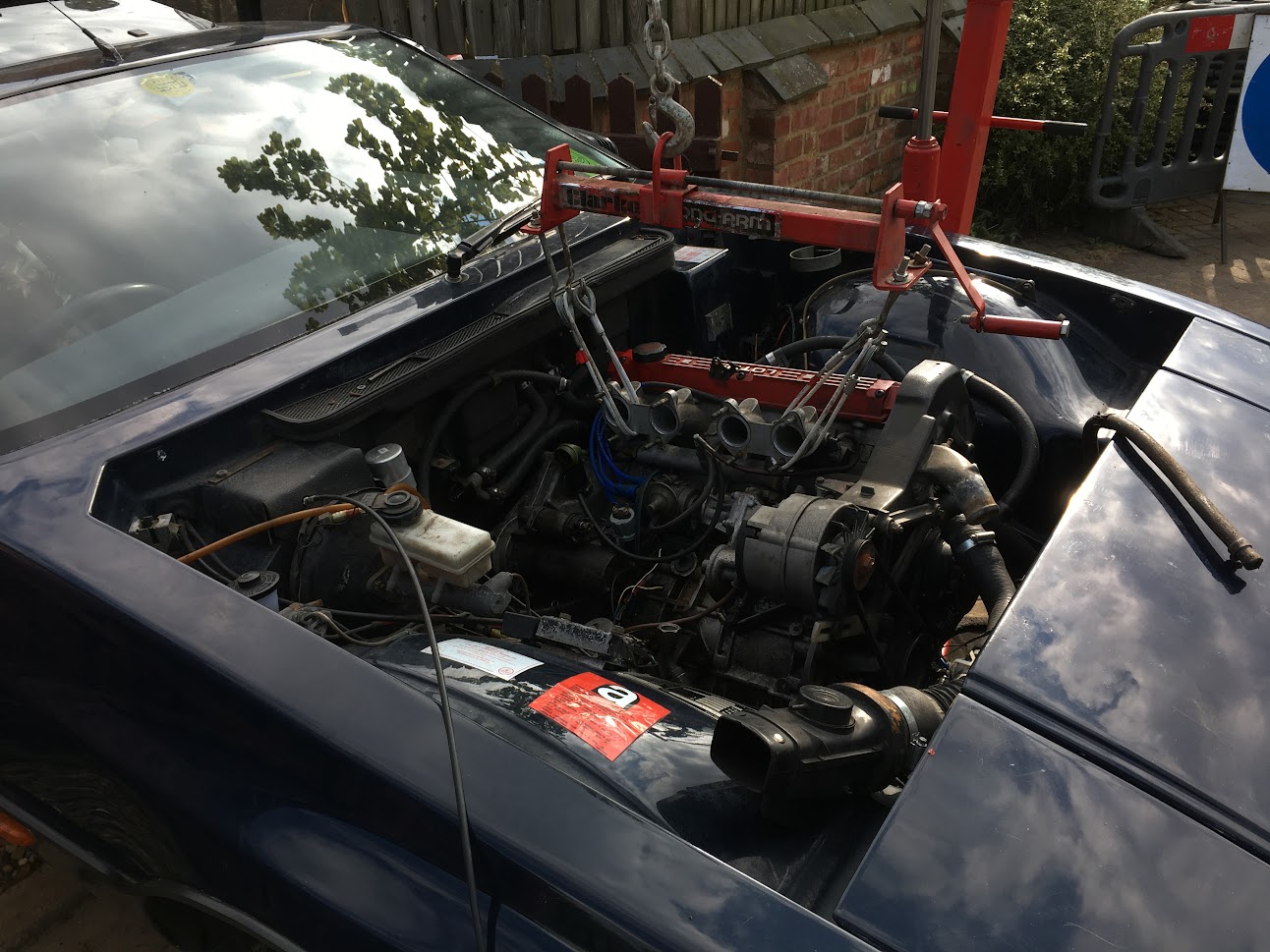 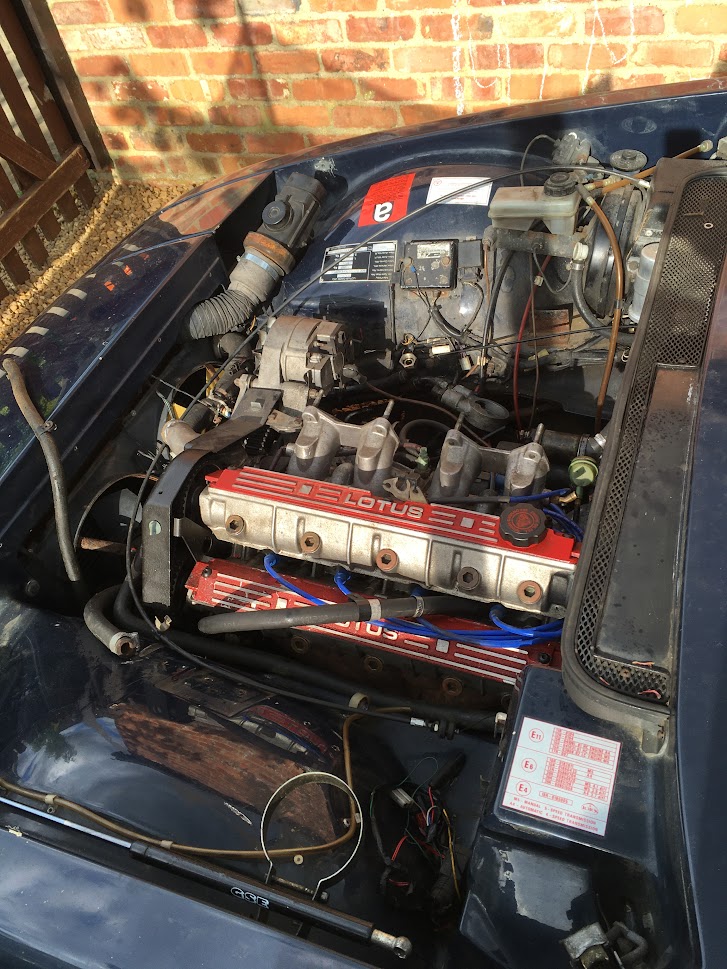 You're becoming a dab-hand at this engine removal and replacement thing!

Great job and excellent post. Hopefully it won’t need to come out again until the kids are old enough to do it for you.

The exhaust manifold studs arrived on Saturday, but I was too busy having fun with the kids to get any engine work done. Sunday the studs went in, then the engine/gearbox went back into the car, with the assistance of wife and both children! Good fun trying to line up three gearbox mounts, propshaft and exhaust manifold-to-downpipe all at the same time...


Do you have a link to the correct studs? Noticed a couple of mine are missing and don't want to buy the wrong ones. Ta.

I bought stainless exhaust studs plus new nuts for my 89SE from Gary Kemp - see link below (then go to his ebay shop perhaps)..