Has anyone managed to separate the thick, silvered, portion of the gear lever from the lower part of the lever? I need to remove mine in order to replace the gearbox gaiter, which has split. Looking under the thick part of the lever, the shaft is much narrower and should fit through the new gaiter. 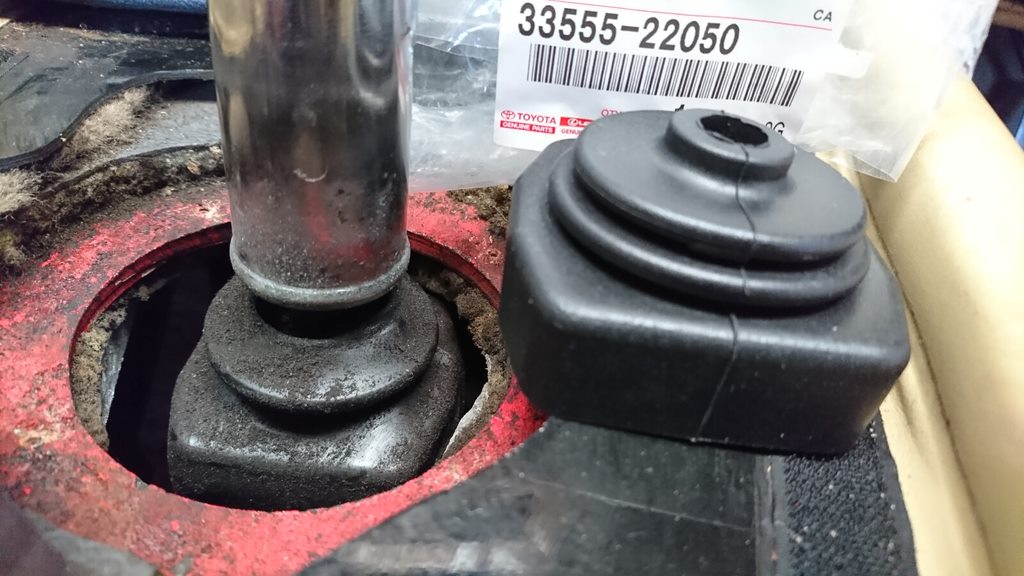 As part of my ongoing interior renovation, I decided to replace the gear lever seat and bush while the centre console was removed. I had the parts back from when there was a group buy on the forum. I found the thread showing how to do it, but before starting disassembly noticed the gaiter was split. The instructions show to remove the gear lever as a complete assembly, with the gaiter still attached, but it looks like I would have to split the assembly to change the gaiter. Any ideas?

I identified the gaiter as Toyota part number 33555-22050 and bought one from a dealer. Once I've confirmed it fits correctly I'll add this to the Parts Alternatives thread.

Thanks in advance.
Bryan

If the new gaiter is anything like a CV boot you may be able to just grease it up and slide it over.

That's quite a stretch! Will have a look how flexible the new gaiter might be...
Bryan

Take a look at the CV boot fitting cones! I was astounded the first time I used one.

It will stretch over the base of the lever (edit), the base of the lever has a metalistic type of bush in it which you can see on the following link and is very difficult to get out if impossible without major surgery. You may find that the nylon cup underneath it has disintigrated tho ! Try putting the rubber in very warm water to soften it, the shape of the upper lever is very similar to a CV stretcher.

Dont start all that again!!!!

Well it worked! Amazing what you can achieve with a bit of heat and some lube!

The warmed gaiter slid easily over the greased lever, and into the correct position - job done. Thanks for the suggestion Pete!

Gear lever seat and bush also replaced, the old one was literally in hundreds of tiny pieces. I spent the afternoon picking them out with some tweezers, and wondering how much has already descended into the gearbox. The gearchange feels super slick now, but I need to put my interior back in (including the driver's seat) before I can test drive it.
Bryan

Good old bryan, well done. get that seat in and get driving.

Wish I tried that!

The gear stick is in two parts and if you look closely under the boot you can see where it is welded together. The bottom half of the shaft slides into the top half and is tacked. You can grind off this tack, pull the shaft apart (WD40 helps here), put the new boot on and carefully tack this back together with a stick welder.

This worked for me but if you can stretch the boot over the whole thing without it splitting even better!
Top
Post Reply
9 posts • Page 1 of 1