For all those wiring gremlins we love, this is the place to discuss them.

I usually try to believe that our car electrics are pretty straightforward, and any fault should be diagnosable with a logical, methodical approach and careful reading of the circuit diagrams. But I have an issue that doesn't make sense...

For some time now I've had gauge readings that don't look right - voltage too low, coolant temperature too low (both from what I'd expect, but more importantly from what I've measured with an infrared thermometer), oil pressure too high. All of these could be consistent with too low a voltage at the gauge.

So, being methodical, I measured the voltage at various points along the route. All of these are with a freshly-charged battery (albeit one that seems to lose a lot of its charge if left for a week), engine not running. Battery voltage was measured between terminals; all other measurements used the same earth point to ensure consistency, which is the bolt at the bottom of the fusebox.

All of these locations are connected by what should be decent bits of wire, so regardless of the current draw of the components they should all be at the same voltage. Any voltage drop, in theory, could only be due to resistance in the wire between the components. But if it's pulling 1.1 A, the voltage drop from the fuel gauge to the voltmeter, 0.27 V, must mean there's a resistance of 0.25 Ohms. In fact, the current along that stretch is probably less, because some of that 1.1 A will have been drawn by the fuel and coolant modules; less current must mean the resistance is even higher for a given voltage drop.

I cannot believe those wires have a resistance that high, I'd expect it to be more like 0.01 Ohms or less.

More investigation is probably needed - I could measure the current draw from each gauge (although the oil/coolant/tacho are more of a faff to reach than the fuel/volt gauges), as well as the voltage at the inner gauges. I could try disconnecting each gauge in turn, or connecting one at a time. But even with that extra info, I can't think of an explanation for this voltage loss.

ALSO does anyone know where the low fuel module and low coolant modules are located? Then I can try disconnecting them / measuring their current draw, to see what happens?
"Farmer" Richard

Circuit diagram of the relevant page: 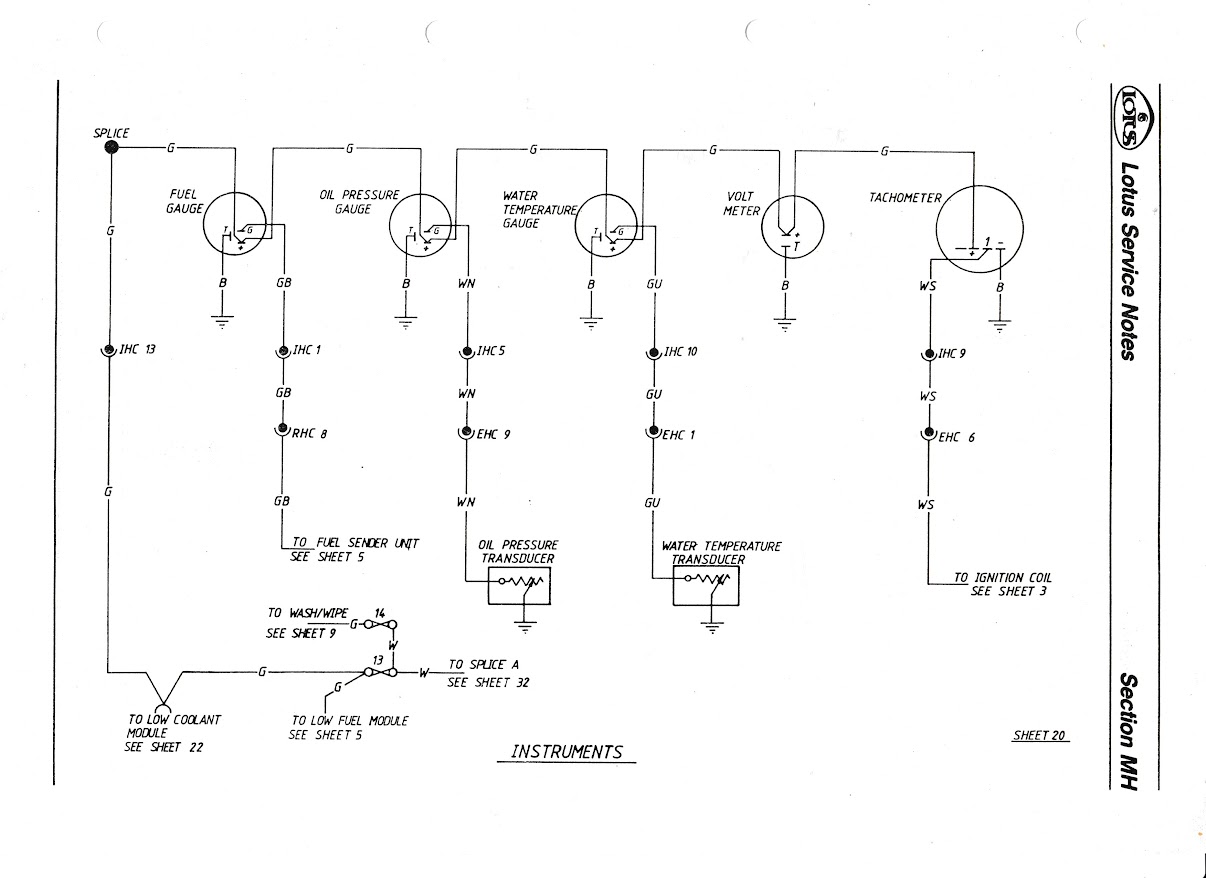 Not sure where these connectors are to be found...
"Farmer" Richard

IHC is behind the instruments. RHC is in drivers footwell, as may be the EHC - can't quite remember!

Battery earth to chassis is ahead or the rear crossmember on the right.
then ...

Engine earth strap to block.
then ...

Block to Pedalbox - which is the source of main harness earths, including the fuse box where you measured from.

So I'd be assessing the state of the earth strap and block connection first (as you've had the engine out relatively recently). If that's OK then go back to the battery to rear chassis earth.
Peter K
Top

Low fuel module - is that the DECEL left hand side of tank wall?
Top
Post Reply
5 posts • Page 1 of 1

Return to “Electrics and Electronics”