With a month on furlough ahead of me, and some time on my hands, what could be more therapeutic than a bit of easy leather renovation? I've been meaning to do it for years. However it has not, so far, been the relaxing experience I hoped for...

I sent a sample of leather off to Woolies for them to match my sand leather interior. I ordered Kit No. 2, the 4/5 seats (Mk 2 Jag) size, but then spoke to Phil Tanser and he told me he needed more than the 500ml dye that is included in this kit, so I phoned Woolies to try and upgrade to the Jensen (1000ml dye) kit, which is apparently sufficient for 4/5 seats and a full leather interior, a la Excel. Unfortunately Woolies had already dispatched the first kit, so the second bottle of dye was an extra £50. Lesson learned - if you have the full leather interior, go for the Jensen kit straight off.

I removed the front seats, 7 of the 8 bolts came out fairly easily. The standard problem of getting a grip on the bolt head was solved by using a pair of vise-grips, the jaws of which just fitted in between the runners. Allen head bolts on order for refitment. The 8th bolt (rearmost on the outside of the driver's seat) proved more difficult because I didn't have room to get the jaws over the top of the bolt - the seat frame was in the way. I thought it was strange, because they had fitted OK on the passenger side. The reason was about to become apparent! 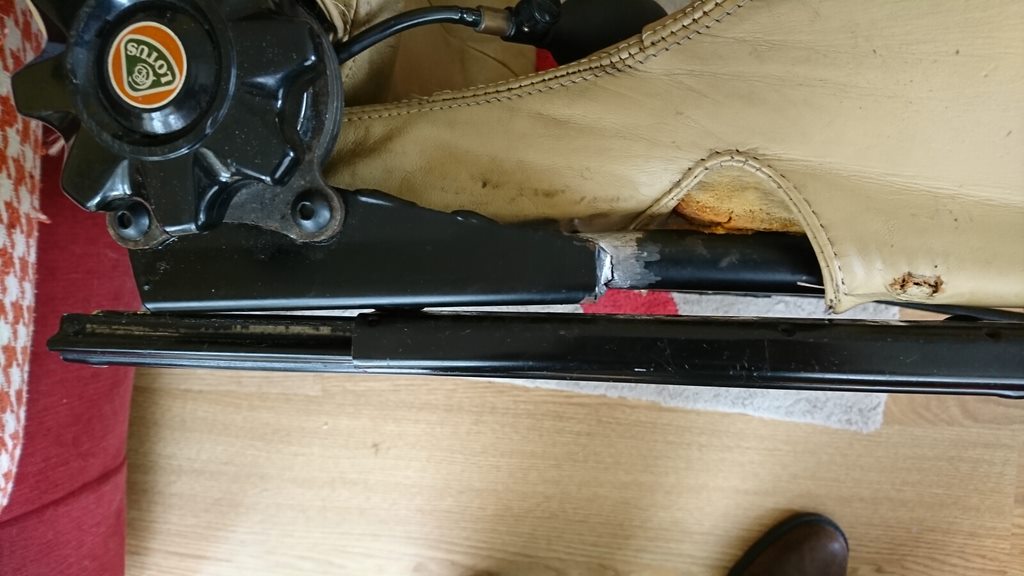 The frame had cracked in the most common place, just forward of where the recline bracket is welded on. In fact, it is probably this weld that causes the tubing to become brittle in this area. The size of the crack was only revealed once I had dremelled the paint away. I've mentioned before to some that my driver's seat had a bit of a list towards the door. I suspected the seat back being twisted, but the actual cause was the distortion of the base. Luckily, I am friendly with some fabricators who, after some discussion, were able to skilfully straighten and weld the tubing, while adding to thickness in the affected area. The clips holding the seat diaphragm intrude into the tubing, as do the threads for the mounting bolts, so it was not possible to slide in a length of tubing of any length inside the affected area. So we were relying on the strength of the weld. You can see in the first photo that the crack has occurred when the recline bracket has pivoted backwards on the single hex bolt that holds it to the runner. Fortunately, I found a way to reinforce the area. I added a second M8 hex bolt (the one on the right in the last photo). There was enough metal in the recline bracket and tubing to enable a decent length of thread to be tapped. A thick penny washer maintains the right spacing between the frame and the runner. So the recline bracket now cannot move, and so hopefully the stress on the tubing (and the weld) is reduced: 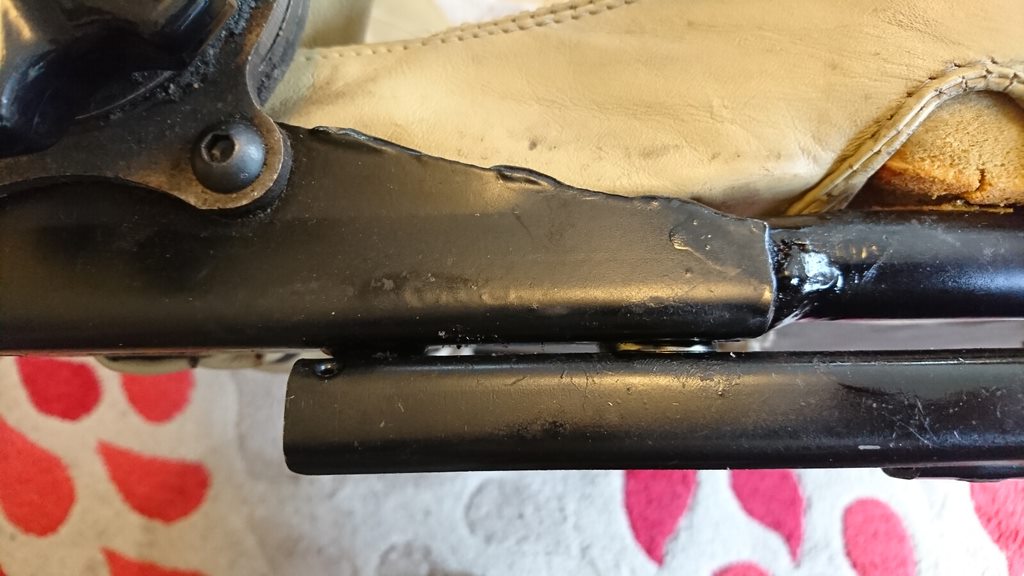 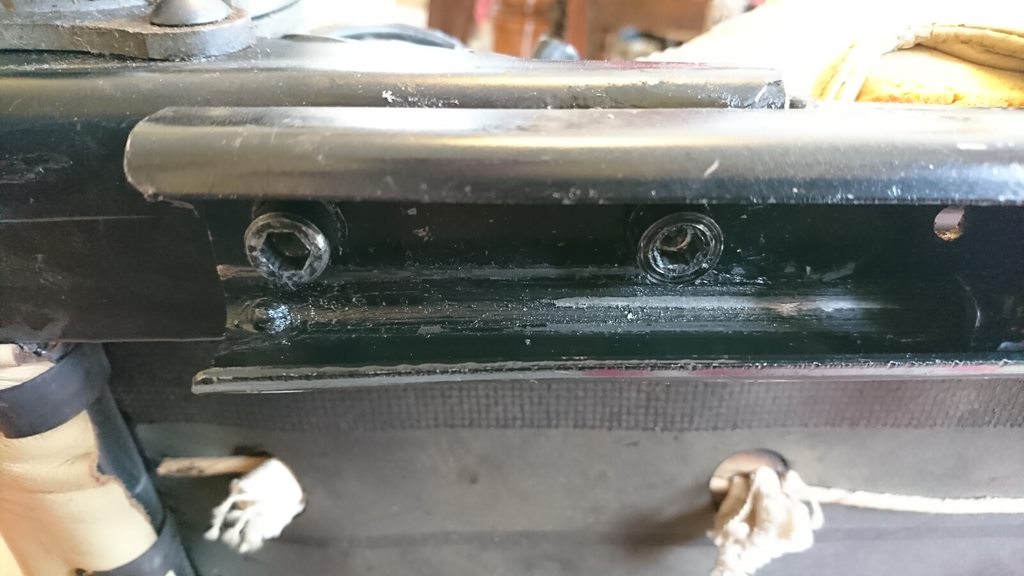 ) it was on to the leather. I thought it wise to start on some small parts, so I removed the centre console, the tape storage tray, and the panel which covers the fuse box under the steering wheel. I followed the Woolies instructions to the letter, regarding cleaning and then wiping down with a damp cloth, but I have had no success in getting the renovator to "key" and actually stick to the leather surface. As soon as I try to apply a second coat of renovator, or apply the sealing paste, the first layer is just dragged away from the leather. The leather in these areas is smooth and in good condition; I was hoping to carry out a minimum of renovation to them, just enough to match the colour. The Woolies instructions mention it COULD be beneficial to apply wire wool to smooth leather in order to get a key, but this seems quite drastic on a piece of perfectly good leather.

Does anyone have any experience with the Woolies kit, and applying it to smooth leather in particular? Thanks in advance...
Bryan

On the leather dye, mine was Furniture Clinic not Woolies but was really effective, the missus dabbed on with a small sponge and no way would it come off, second coat no issues either. Frankly I was amazed at the professional result we achieved.

I don't imagine the Woolies kit is much different so something is wrong - either a duff mix or something on the leather?

It should be a relaxing and satisfying job as you say so I hope you manage to get it sorted.

Starting to think about some leather repairs myself and looked around the Furniture Clinic site.
Interesting what you say about the quantity needed, although I don't need to go over everything, so maybe 500ml will be sufficient for me.
FC do speak about testing if leather is absorbent or not and seem to have different approaches for each. Might be worth a look, also a lot of good videos on YouTube.
I wouldn't be too concerned about keying with wire wool. Would help get the surface to absorb and take the die.
Tony
What goes together.... Must come apart.
Top

I have used a Woollies kit on my half leather Lotus Blue leather and was very impressed. No hassle with renovator lifting.
The passenger coving has been recovered with a beige colour and the renovator provided a perfect colour match to the original.
Obviously I had no problems with quantity.
At the start of Covid 19 Woollies told me they could not supply (for Jag XJ40) as their supplier was not open.
The wire wool preparation sounds OK, the renovator works wonders on scratched leather so wire wool should not be a problem,
try it on a non-visible piece of leather.

Bryan, I think the reason the colour won't stick to your leather is that it has had a lacquer coating applied to seal it. I'd imagine that the wire wool or a plastic abrasive pad would fetch it off OK with a strong leather cleaner - here I think you'd be better finding out from someone like Woolies or Furniture Clinic.

Their LRC15 product looks like the one to use.

I used Woolies "Jensen" kit on the marked and desiccated magnolia leather in my previous Excel. I applied the dye with an airbrush after the leather had been given a thorough cleaning and I was pleased with the results. I didn't bother using the sealing paste afterwards. I think the dye has got to be sprayed on rather than applied by hand
Kev W no.282
Top

There is a finishing coating on the leather that needs treatment before any chance of success, mechanical or chemical.
Try giving Leathercare near warrington a call. I tool a sample to them and they explained how the leather was originally done and gave me options of what could be done ,they were really helpful and no sales pressure . Had a quick tour and seeing the difference from what came in to the finished item was impressive
Top

Thank you everyone for your comments, I'm having a bit more success now.

Richard - I think you're right, there was some kind of sealer / lacquer on the leather. The Woolies cleaner, used with sufficient vigour, seemed to take it off along with some of the original colour, leaving brown leather visible through the remainder of the coating. I was able to apply 2 coats by cloth, which "took" to the leather well, but looked a bit blotchy.

Following the forum advice (and to be fair it is mentioned in the Woolies instructions too), I bought a small airbrush. Wow - what a difference! Two further thin coats and the leather literally looks like new, with a totally even finish. After 24 hours I applied the sealing paste, which darkened the shade slightly and gave a satin finish. Still quite a bit lighter than the original leather which had been exposed to the sun (I took the sample from an unexposed area). 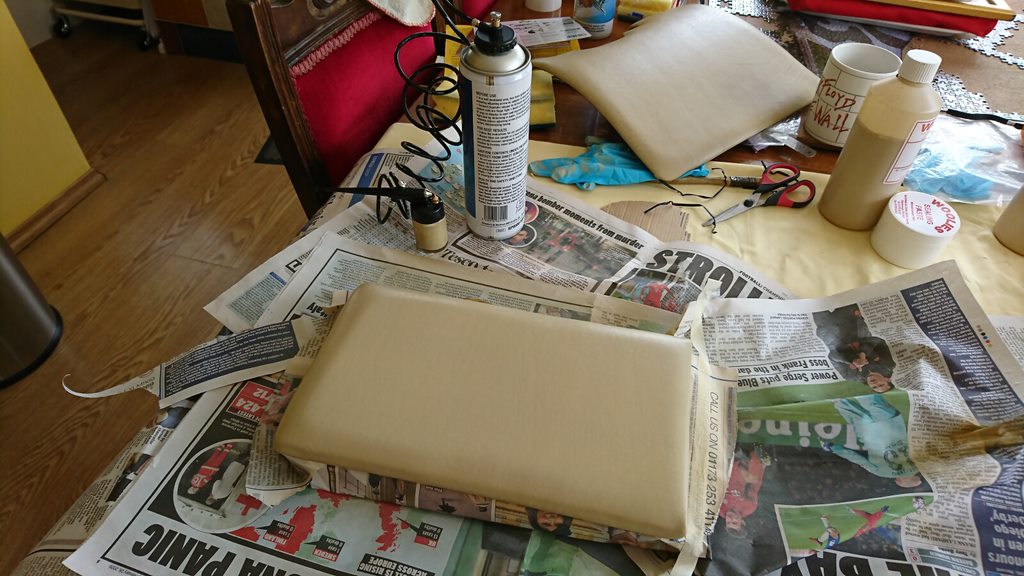 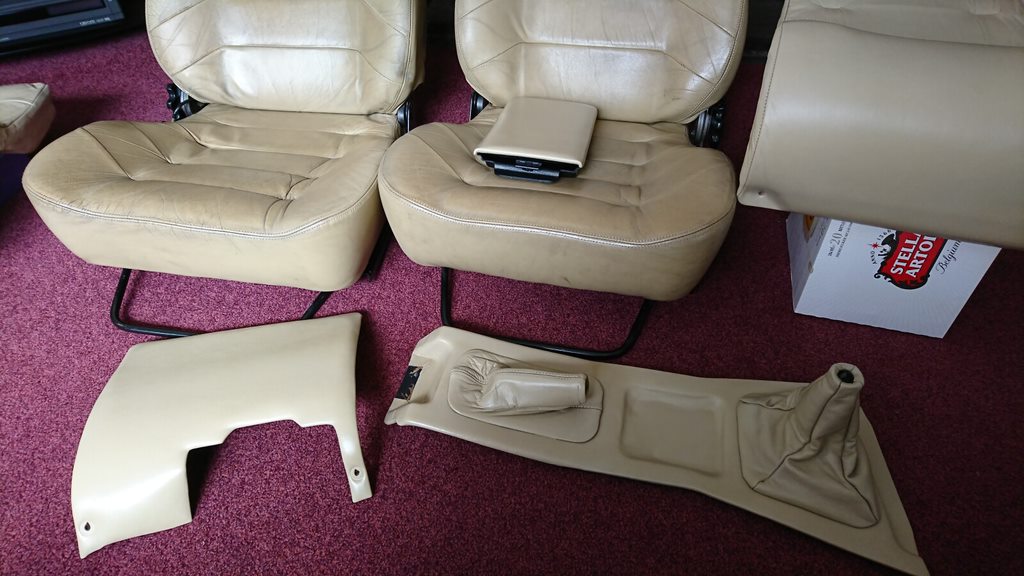 Now on to the front seats, which are by far the most worn area in the car. Fingers crossed!
Bryan

Pleased you got it sorted.

Make sure you get some good close up before and after photos of the front seats - watching with interest!

Great results Bryan - and useful feedback about using an airbrush.

2 months, 1.25 litres of dye, 2 pots of sealing paste, and 4 cans of airbrush propellant later, it's finished! What I thought would be be a nice week-long furlough project turned into quite a marathon. But the results were definitely worth it. After a shaky start, my technique definitely improved, the airbrush is a must IMHO. Thanks to Phil Tanser (Tanz) for his initial advice. Here are some key points for those brave (daft...?) enough to attempt it.
Any colour variation in the photos was down to my phone camera, which showed a different shade in each picture! 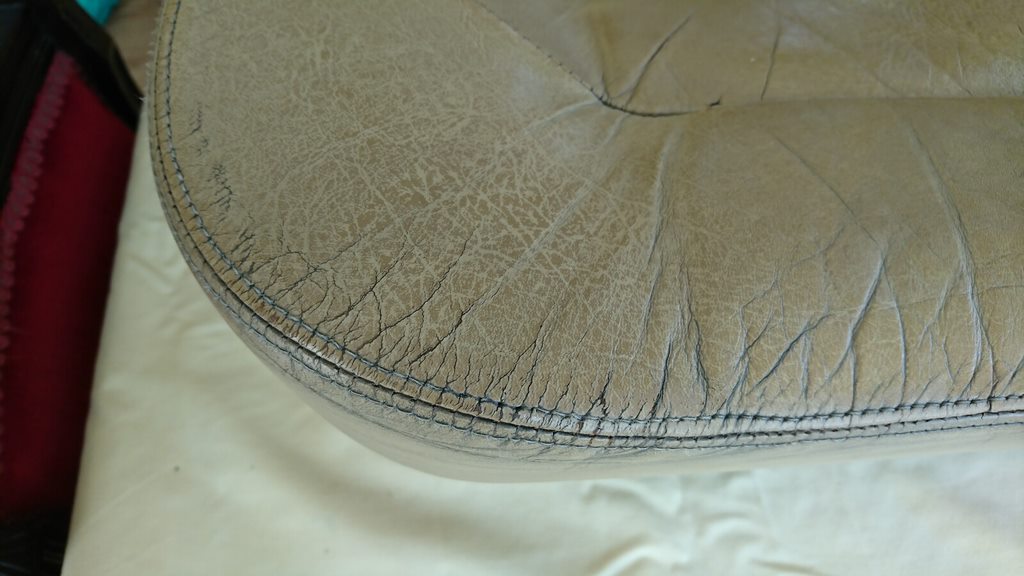 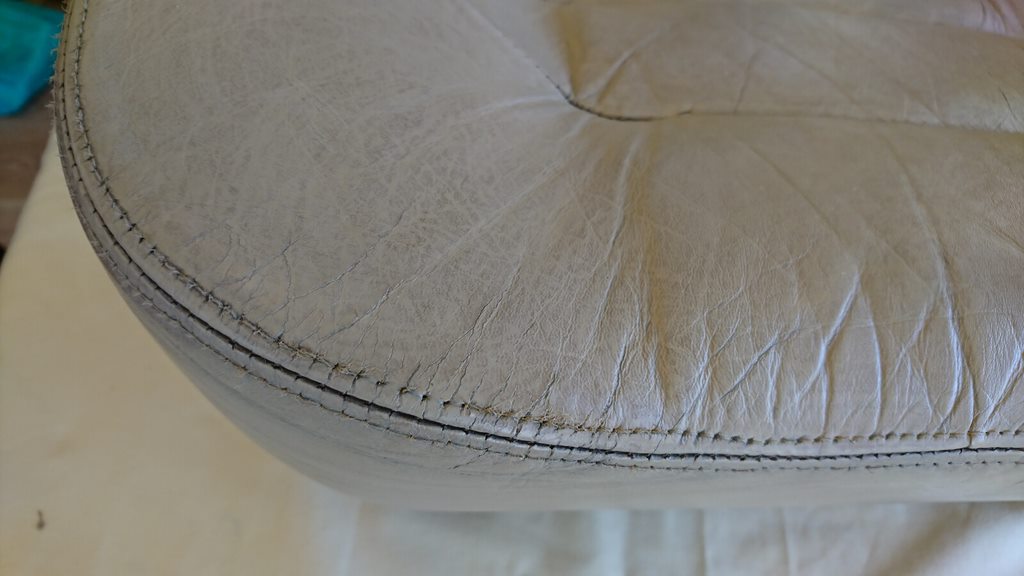 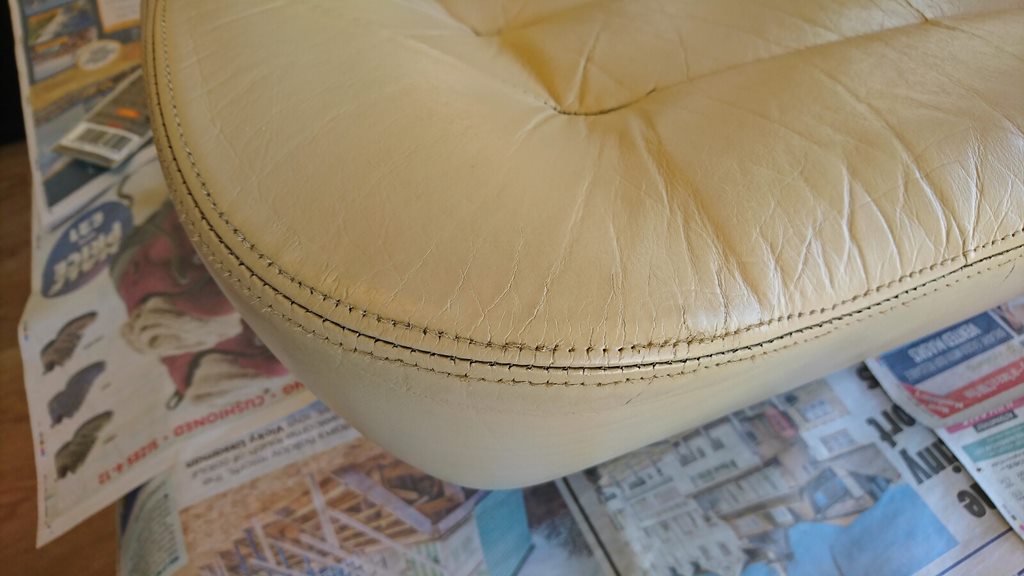 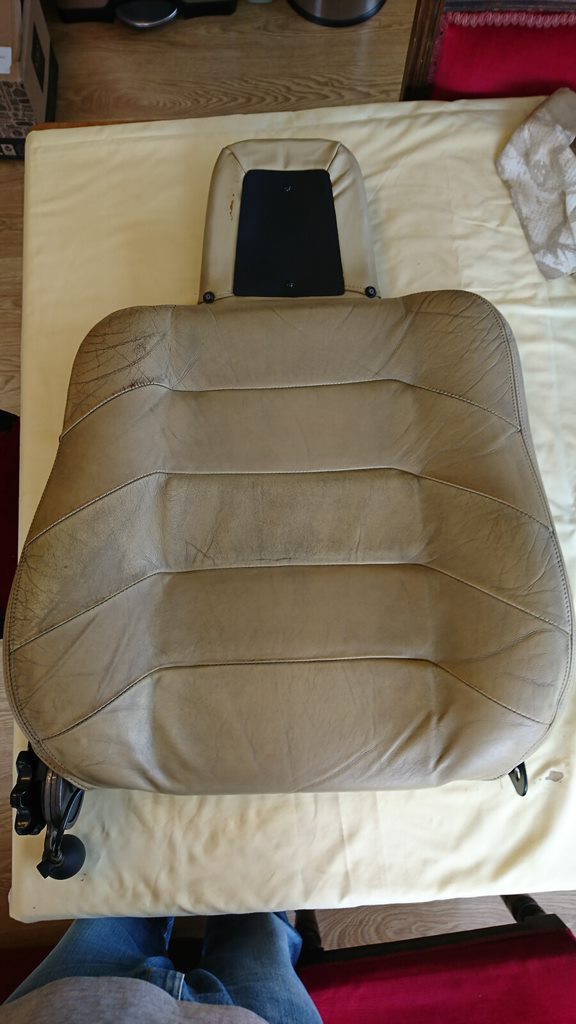 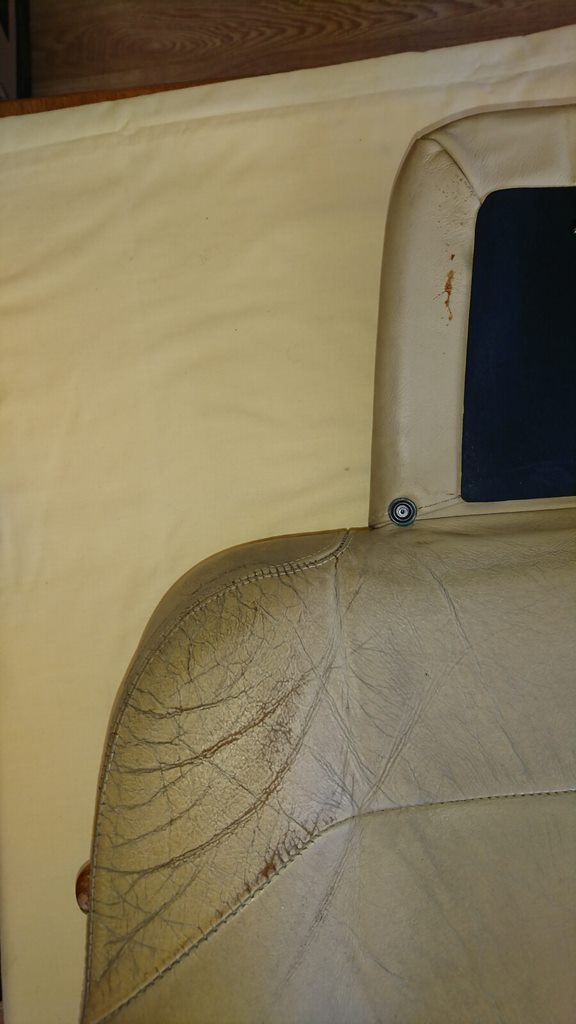 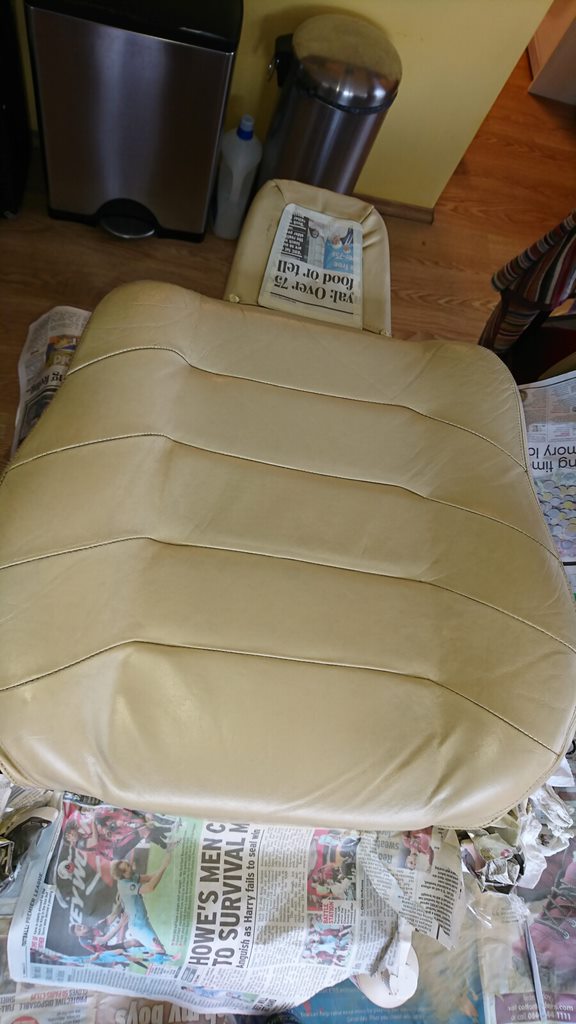 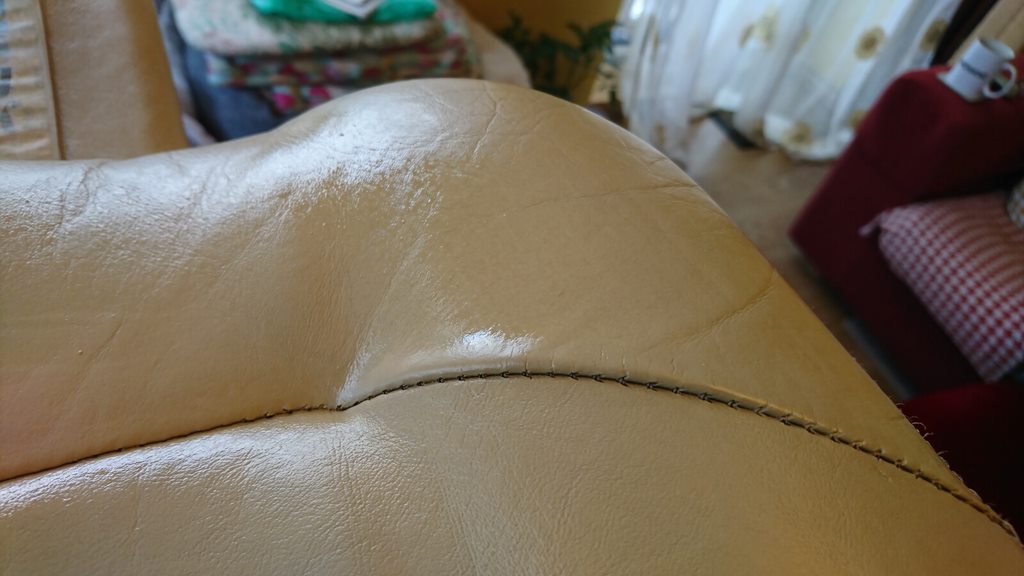 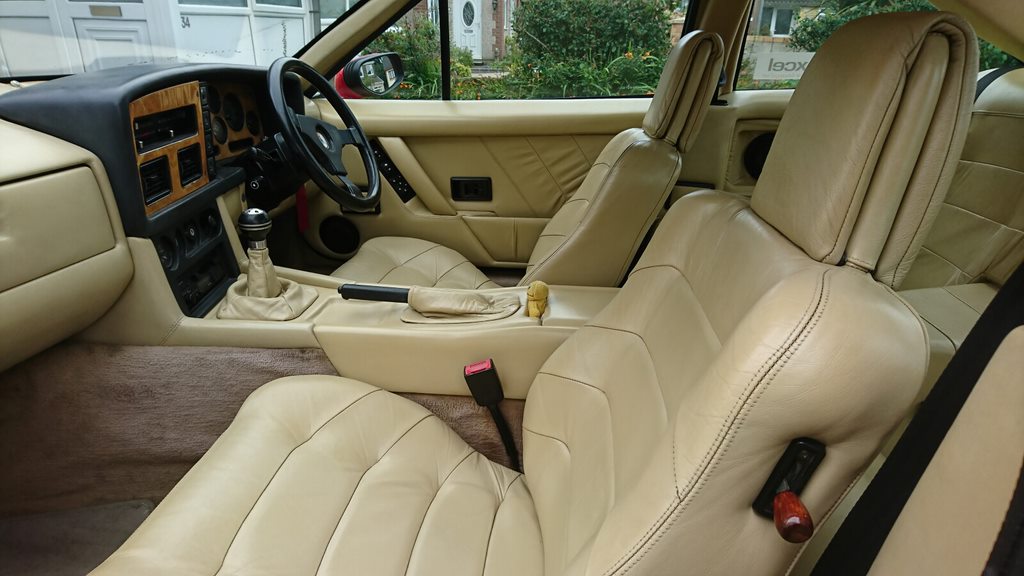 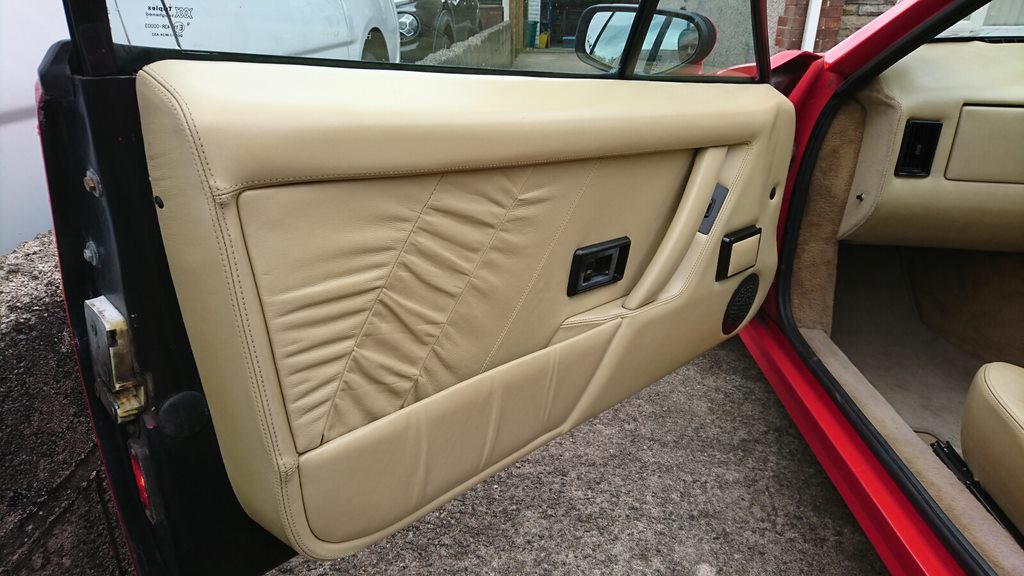 An indication of the evenness that can be achieved with an airbrush. Dash was renovated in situ - the narrow portion between the windscreen and the black binnacle was very difficult to reach, and not possible to spray. It has a brush finish which is not as good. If I ever have cause the remove the dash or binnacle, I will redo it. 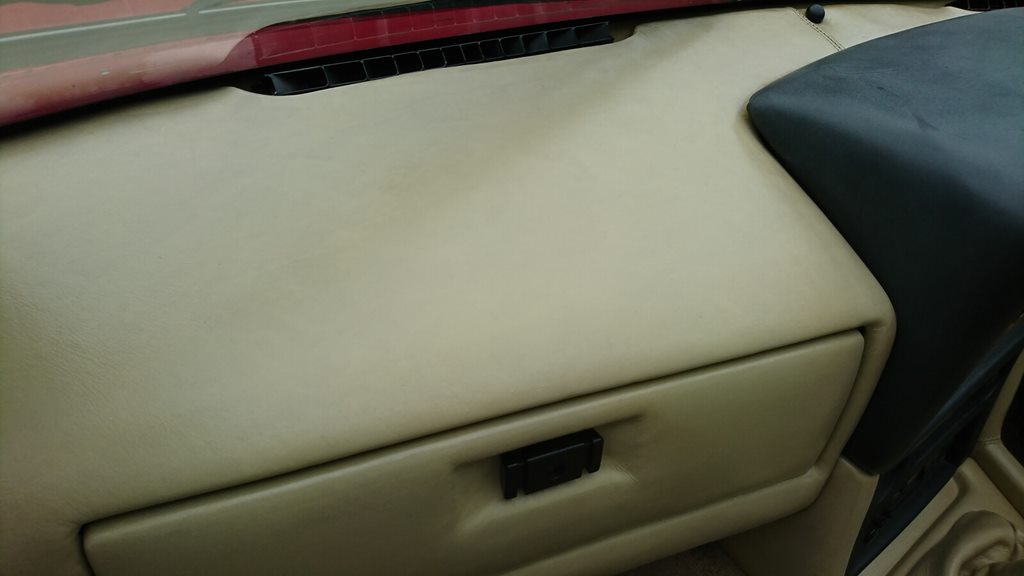 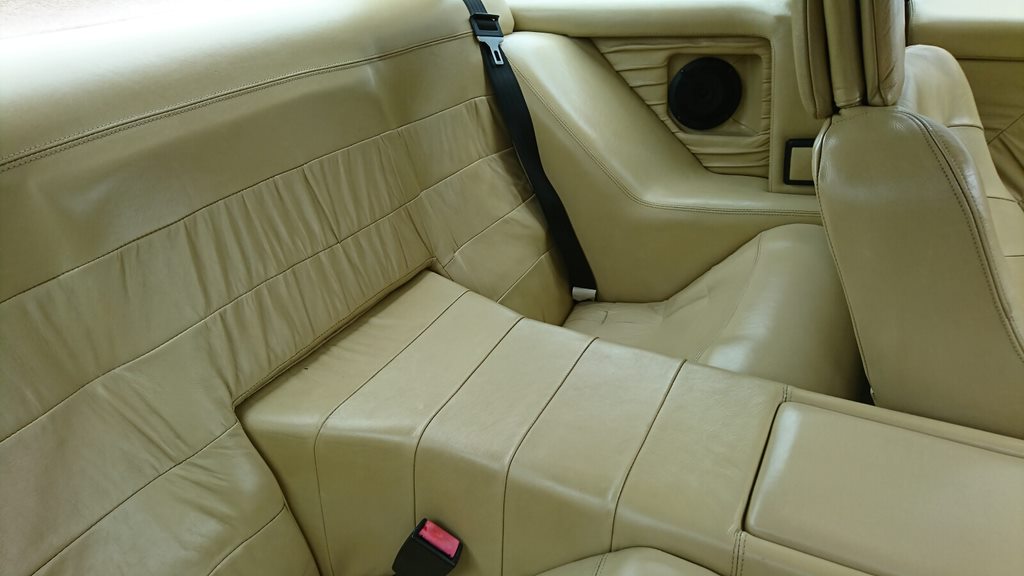 Handbrake gaiter and the sides of the centre console were really worn but now look like new: 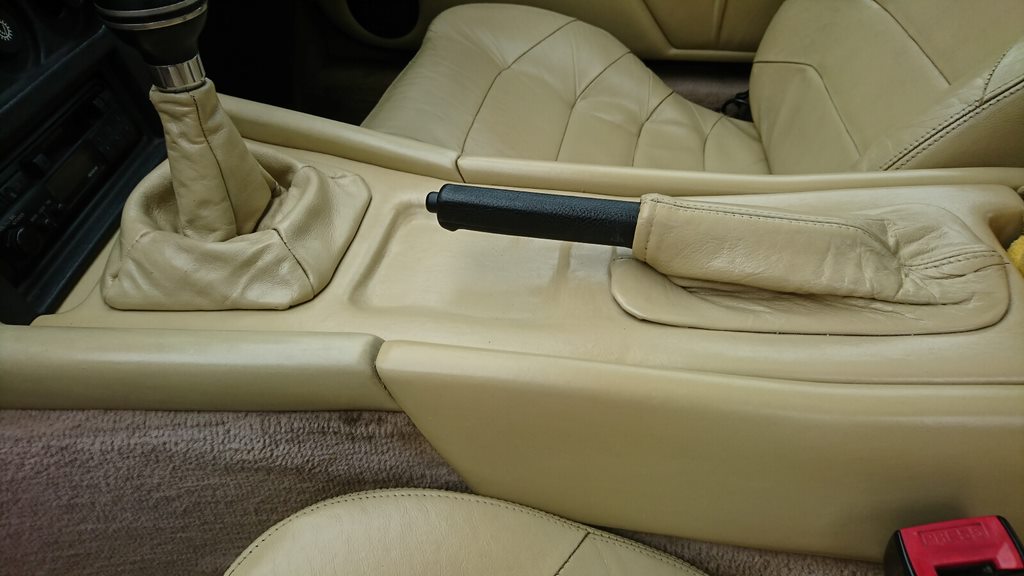 Just waiting to get the first shoe scuff on that door card.... 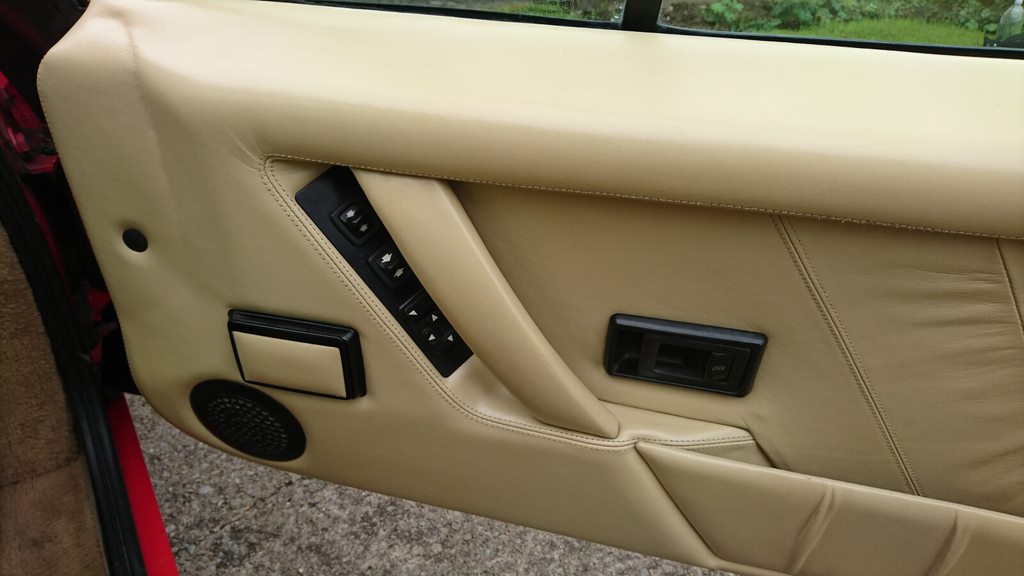 Shoulder of the driver's seat now looks much better. Seat knobs sanded and revarnished too: 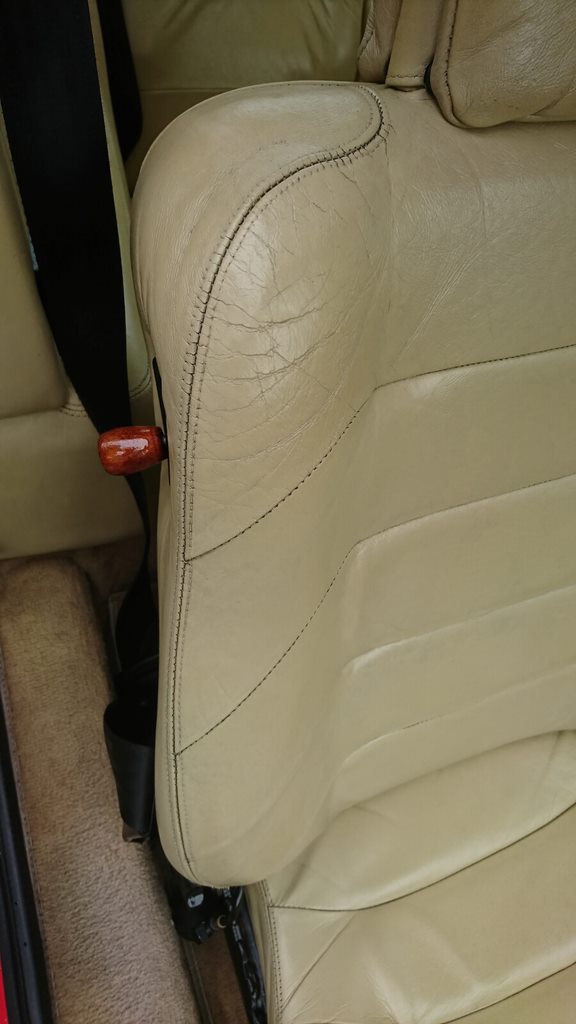 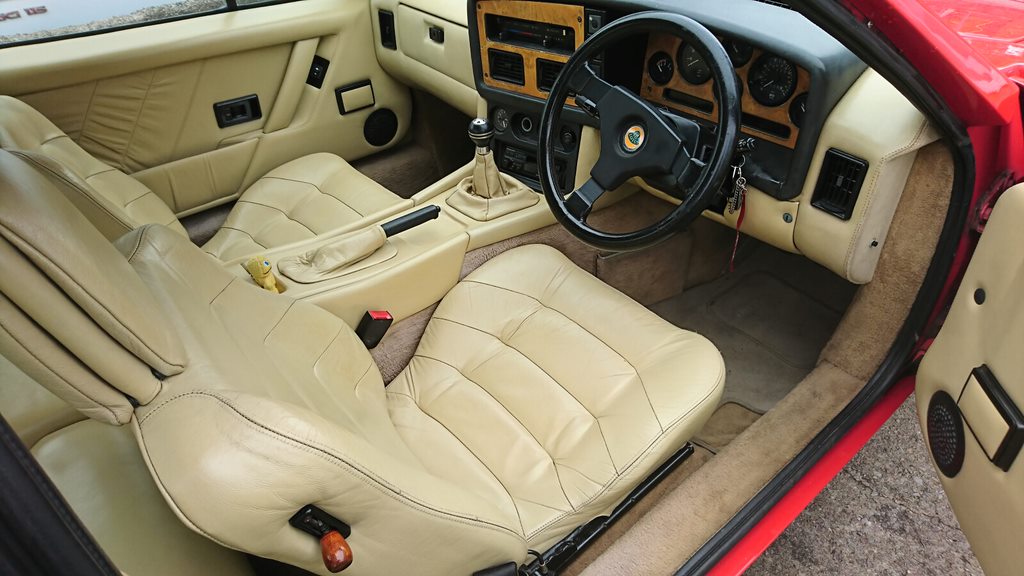 Fingers crossed that the new finish is resilient to the bumps, scuffs, and scrapes which are part of Lotus life!
Bryan

Looks excellent Bryan, you must be very happy with it.

Thanks Andy! Zippy has lived there since I bought the car in 2007, and it's never let me down. So there he stays!