Over the last couple of weeks I have been replacing my headlining because it was very badly needed (see photo's later).

Having not done anything like this before I was amazed that the actual hardest part was deciding on what fabric to use - I went from 'as per Lotus' to diamond stitched leather look 'a la ferrari' and ended up selecting a faux suede 4 way stretch fabric .

I sourced this (following a friends suggestion) via ebay from a company named VLT UK, aka Vandalised, who specialise in fabrics for vans and campers. I selected the colour named dark grey, though it was actually lighter than I expected but somehow matched really well with the existing vinyl trim. A 3m length of 1.5m wide fabric, together with 2 cans of high temperature trim-hold cost £46 - If I was doing it again I would order 4m and 3 cans. The reason for this is that to get the knap of the cloth in the same direction on all the pieces involved about three hours of arranging & re-arranging the templates on the cloth to try and achieve this + plus I ended up having to buy another can!

When I stripped out the old trim sections I noticed that there were no seams on any of them whereas the blogs all mentioned seams at the corners of the front rail and at the angle of the rear sections - so I decided to carefully strip the old covering and use this as the pattern to create paper templates for each piece and see if I could do it without seams. I also decided against the pre-covered panels for the roof sections as the front has a sunroof and the back was not difficult to do anyway direct to the roof skin. One discovery I made was the underside of the roof panel had Glacier Blue written on it in marker pen which was presumably a reminder during production.

To cover the sections I generally worked from the centre outwards to each side in stages and must say that this fabric worked really well. The stretchability meant that I could lay it onto the majority shape and then mould it into/over the indents bumps quite easily (having watched numerous youtube videos to see how it could/should be done).

The sun visors have also been recovered in matching fabric and I have to confess that I did not do this - I was seriously considering just leaving them off the car and relying on a sunstrip instead. My wife decided to take up this challenge and found machine sewing the fabric impossible with the foam side up and tried using dressmaking webbing to no avail but ultimately found the perfect solution by using tumble dry sheets. the top edge seem was hand sewn once the cover was on the visor.

The only jobs left to do now are a trim section across the rear edge - I am still looking for something suitable in one continuous length as it is just over 1m long - so any suggestions where this can be sourced would be welcomed - and then to brush the pile to create a more uniform appearance but I am a bit in two minds on this as no doubt it will get rubbed/touched when in use and do not want to be brushing it every time I use the car.

Overall I'm pleased with the result (see photos) and agree with others who have said before that this makes a real difference to what was a very tired interior and wasn't half as hard as I expected it to be. 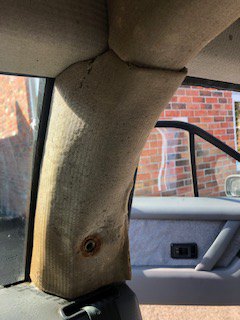 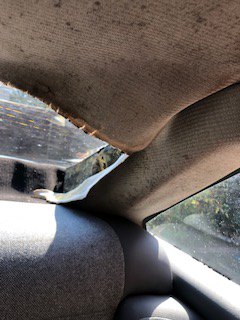 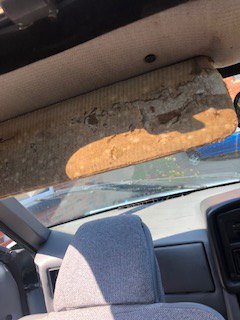 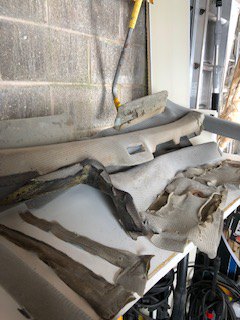 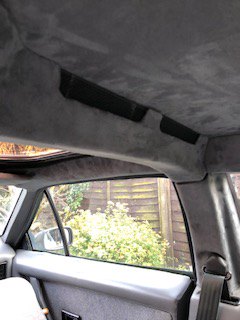 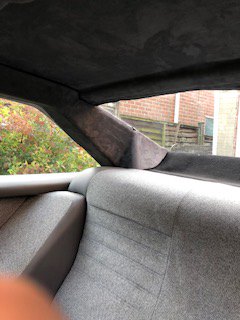 It's not what you've got, it's the way that you drive it

Great work and nice result.
It's most rewarding to achieve these improvements, especially when the outlay is so little.
Next job?
Tony
What goes together.... Must come apart.
Top

Fabulous result, especially the stretch areas which clearly show the contours of the trim panels to great effect.

I've been trying to get someone to do mine in leather which should also have some stretch properties in the right hands. But so far, the folk I've contacted are either too busy (if they are any good), or don't sound-out very competent or enthusiastic during discussions.
Peter K
Top

Thank you Tony, next task was restoring the horn to working order which I have managed to complete this morning, so now it's time to find some replacement headlights as the bowls are rusted!

Peter, thank you too, I think leather would look really good - watched this video https://www.youtube.com/watch?v=IaSm3zoWrAo of a guy doing a dash section in India which took him ages as he seemed to work 1" at a time and without steam but looked good when finished and the leather was quite thick too (even if it was a hideous colour scheme). I would imagine a very supple and quite thin leather would be much more doable but I think it would be beyond me.