Some nice progress there. Helps me seeing how he’s masked up the engine bay for when I get to that stage myself.
Blocking the final primer is normally done by hand - I’ve ordered a set of Dura blocks to do mine, hopefully they should allow this novice to achieve a decent flat finish. I’m not sure he will be using P1200 On the primer as all the research I’ve done including info from professional painters is it’s more normal to be P500/P600. If the finish is too smooth it won’t provide an adequate key for the base coat. When he gets to putting the colour on, the clear coat will normally go on the same day. Then possibly a few days for the paint to fully cure, then depending on how flat the gun finish some fine sanding (colour sanding) and cutting and polishing.
I bet you can’t wait to get it back.
Top

Another week, another not-quite-as-much-progress-as-I'd-have-liked. Chances of being finished by the end of next week, in time for me to go to the Naseby show, are looking slim...

Since last week, he's finished the coarse sanding, done all the fine sanding, and removed the old masking. He's now re-doing all the masking. Not sure why the old masking needs to come off and be replaced, but that seems to be the done thing. There are a couple of pinholes he's identified while sanding that need sorting (highlighted in red with a bit of tape next to them), then the colour will go on, at this rate at the start of next week I hope.

I had originally told him not to bother with the door jambs, as the paint there looked OK, but he's said he'll do them anyway to avoid any hint of a line. The hinge area won't get painted, but I'm fine with that, it's hardly visible and anyway the paint in there is perfectly good. 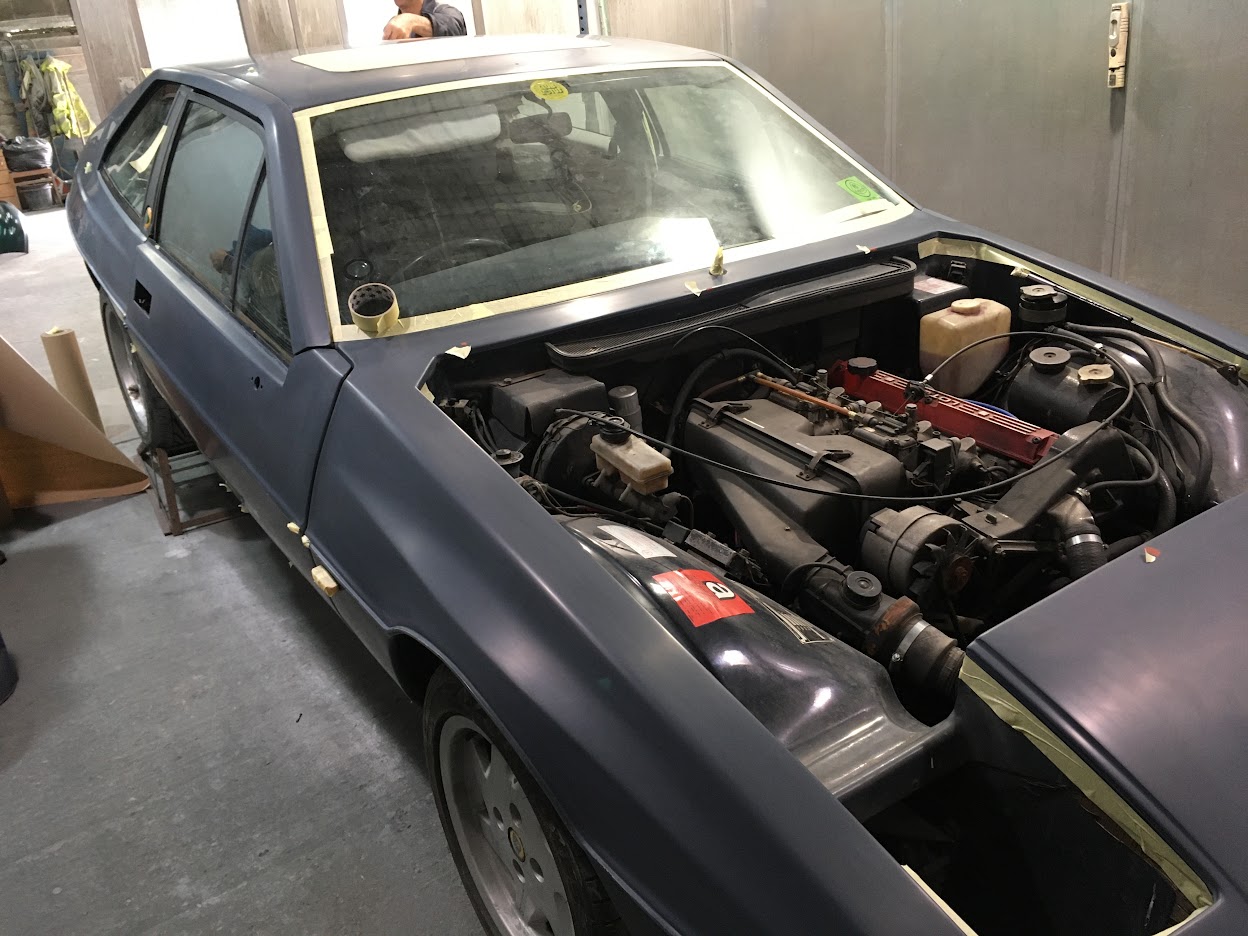 The windscreen trim for a Transit turned up - it doesn't look like a match, as it's more of a J than a T. Still, the painter reckons he could make it work, but trimming off the bottom of the J. That said, he hasn't seen it yet, I forgot to bring it over when I visited yesterday.

Annoyingly he can't find the old trim, he reckons he must have binned it, so I don't have a comparison. 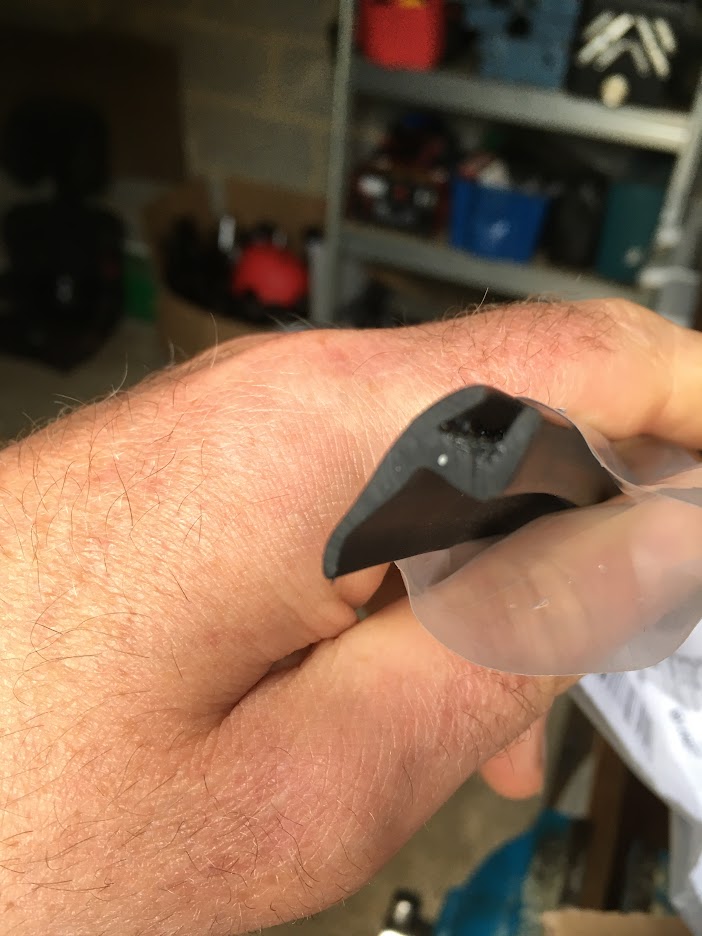 Richard, I had a look on eBay and there was a Transit seal that looked right shape (cannot tell on size based on image), but it was an older one, we are talking late1990s not post-millenium.
https://i.ebayimg.com/images/g/XmUAAOSw ... -l1600.jpg
Top

Back for another visit... back to another not-done-as-much-as-I'd-hoped... The roof and A- and C-pillars have been painted and lacquered, and just need rubbing down and polishing. The rest has had one coat of base colour, and that's it.

This time, at least, there was a very specific reason, beyond it just being more work than he had anticipated. So, I was treated to a lengthy story - what follows is a well-distilled version.

When I last went, on Thursday last week, he did mention that he had ordered a service kit for his spray gun, and wanted to service the gun before he started spraying. However, he finished the masking, service kit hadn't turned up. He called DeVilbiss, maker of quality spray guns, who said they hadn't sent the service kit yet because they didn't have all the parts - including the bit that was most needed - and moreover they didn't even know when they'd get them in. Damn.

So Ray gets on with his un-serviced gun, hoping it'll still do the job. But he gets just one coat of base colour on, and it starts sputtering. Somehow, he still manages to finish the roof and A- and C-pillars, and get some lacquer on that bit, but can get no further.

So Ray then called up DeVilbiss again, and said OK, can I just buy a complete new gun (which go for about £500, compared to the service kit for around £200). Not money he wanted to pay, but he did want to finish the job. Can't even do that, it seems. Stocks of the existing design have been run down, in anticipation of the release of a new model - that was due last March. Except it's now been postponed to December. Meanwhile, no spray guns on the shelf.

So Ray calls a mate of his, who agrees to lend him a gun, although it's filthy. No worries, Ray strips it down, cleans it, but when it goes back together it's leaking air out of the spray nozzle, not ideal.

Meanwhile, DeVilbiss call him back and say they've found another gun that's new, been sitting on the shelves for about 4 years, and they can do him a deal on that if it's any good to him. So they ship it out to him, same day. Problem is, the spray tip is a 1.2, and Ray normally uses a 1.3 or 1.4. The 1.2 causes a finer spray, which starts drying as it flies through the air, so it doesn't properly wet the surface. Ray uses it on another white door that he needs to get done, to try it out, but isn't happy to use it on my car.

However, he can do a bit of mix-and-match - take the 1.3 spray tip off the gun he borrowed from a mate, and put it on the new gun he got from DeVilbiss. However, he doesn't want to do this until DeVilbiss confirm what sort of a deal they can do him on the gun, because he doesn't want to mess around with a gun he hasn't committed to purchasing. So that's where it was when I left him, waiting on a call from DeVilbiss, hoping he can get this gun at a reasonable price and then get on with finishing my car.

When he does, he'll have to re-do the masking. Again. If he's not perfectly happy with the finish on the roof, he'll sand that back and re-do that with the rest of the car. The coat of colour he's already put on will have to be rubbed down anyway. But before he starts on the bodyshell he'll try it out on one of the smaller separate bits - bumpers, boot lid, spoiler, spats, headlamp pods.

So, any chance of attending the show at Naseby is out of the window. And I doubt I'll get the car back next week either. The saga continues...

Meanwhile, do enjoy these shots of my shiny A- and C-pillars, along with part-prepped wing mirrors (did he forget about these, they seem a bit behind!), and other parts still sitting in rubbed-down primer 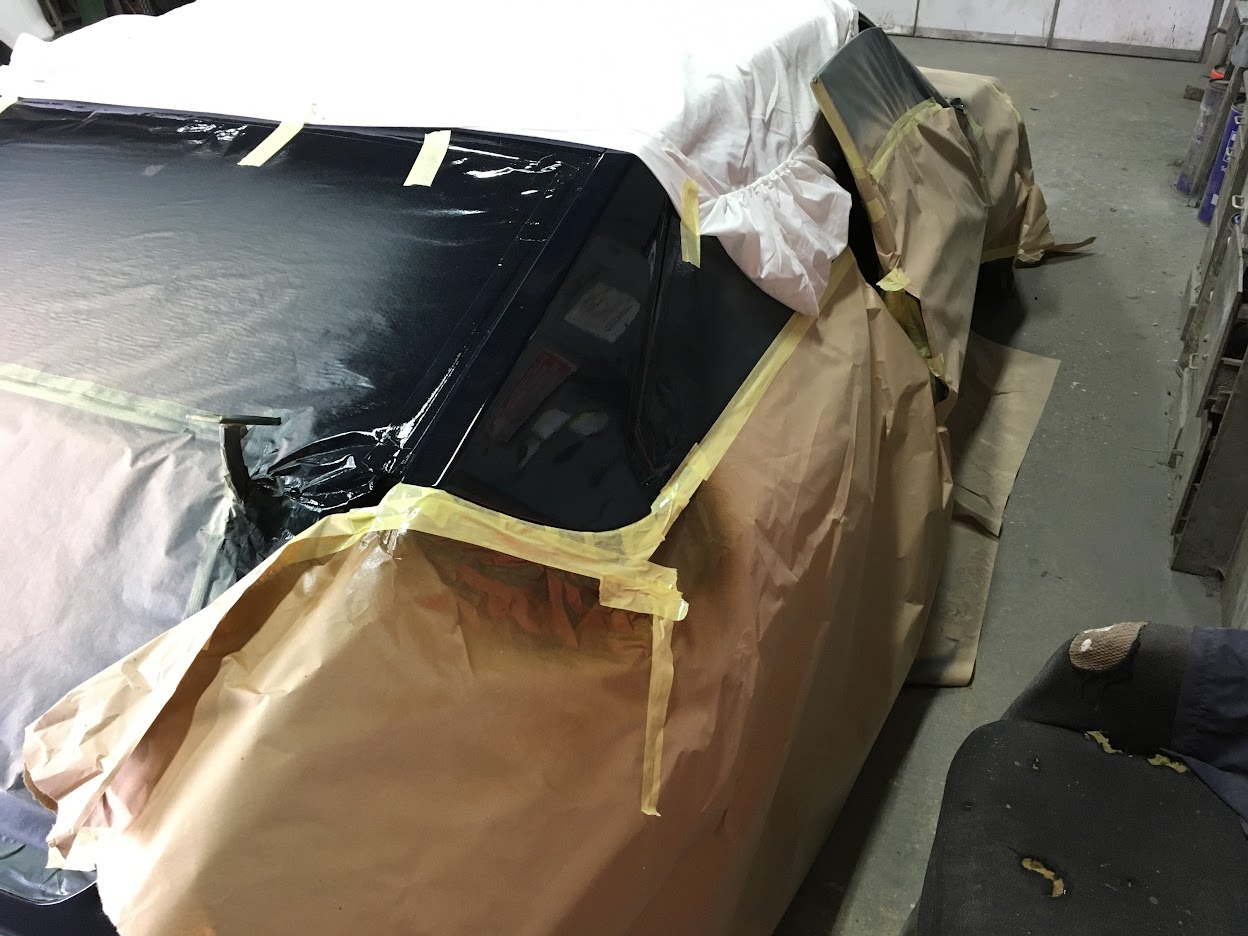 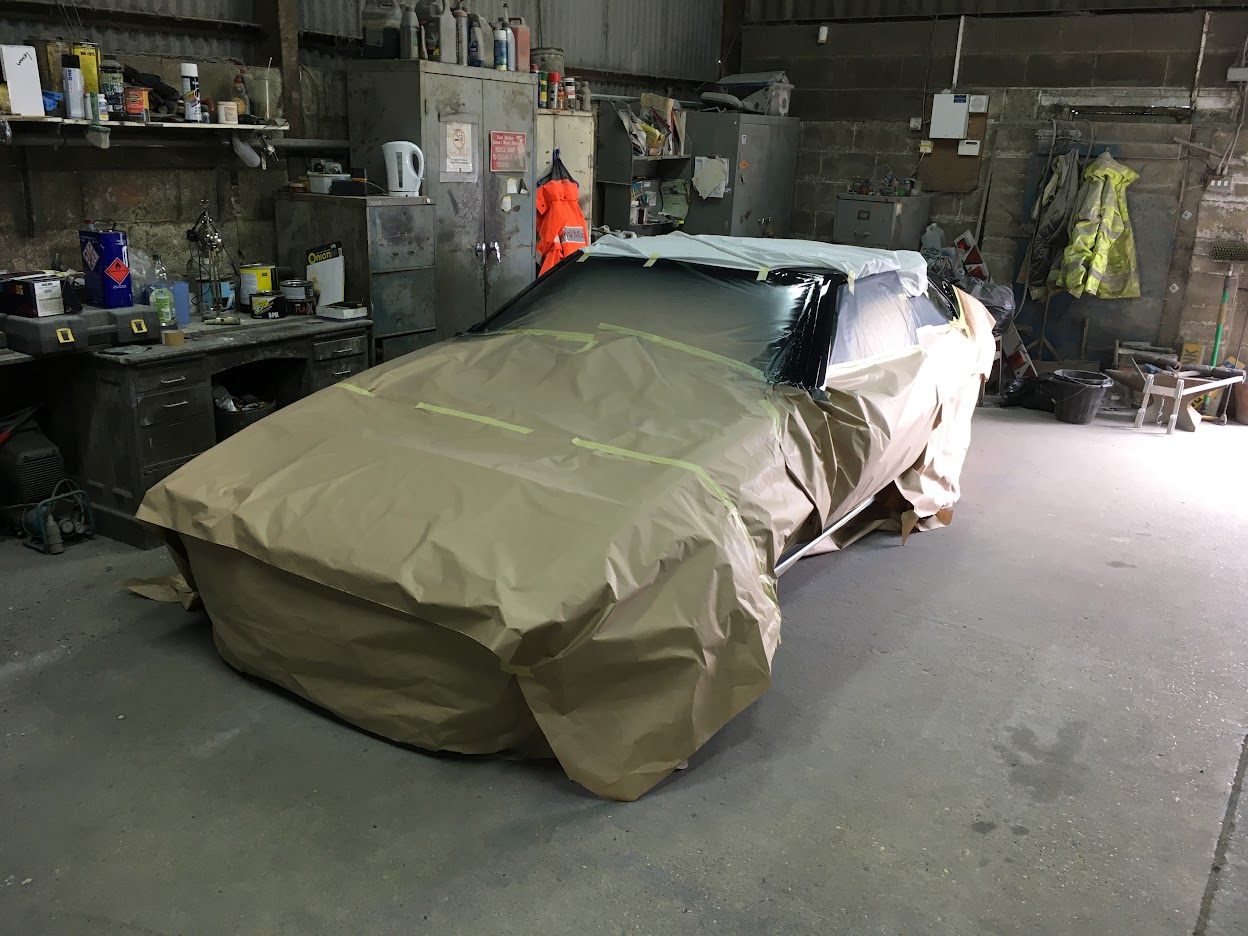 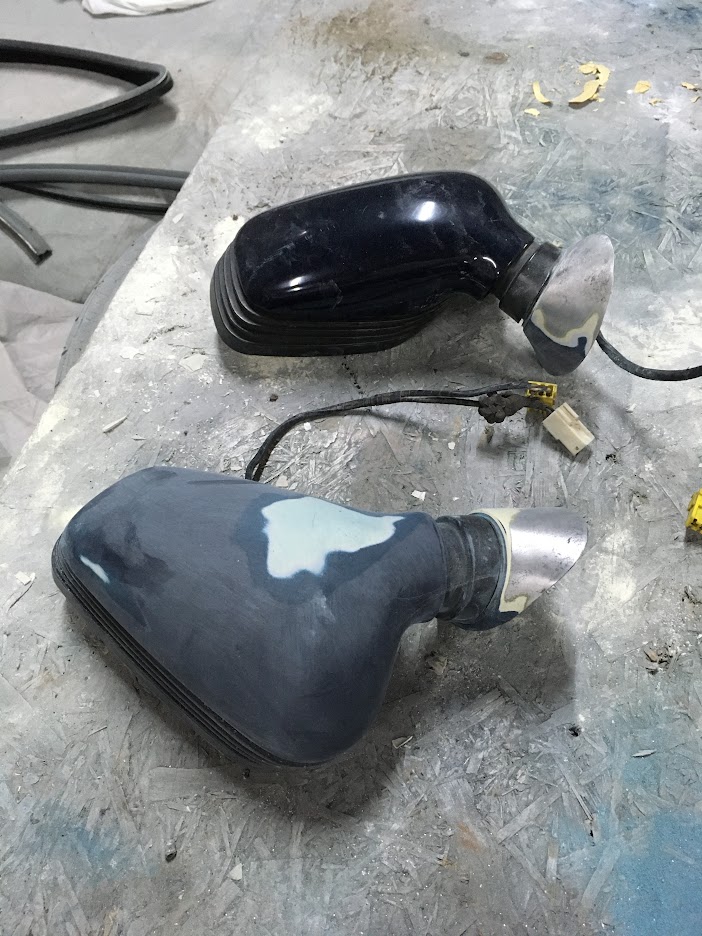 It must be a tad frustrating for you Richard but it does sound as if the painter is determined to good job, which is the most important thing
Kev W no.282
Top

My car has paint on! I haven’t seen it yet, but I got a message this afternoon from the painter that he finished the paint today. Flatting and polishing tomorrow and Wednesday, then getting the car re-assembled at the end of the week. I’ll try and get over and take a look tomorrow, will I get the car back for the weekend???
"Farmer" Richard

I've seen it - my car really does have paint! Can't see much of the bodyshell itself, mind you, the doors were the last parts painted so the rest is currently still wearing its masking.

He's made a start on the rubbing down - you can see the rear spoiler in progress, and the boot lid and bonnet (not pictured) are already done. At this rate, with bumpers, spats, headlamp pods still to do as well as the whole bodyshell, I can't see him being finished until near the end of the week, and there's still assembly to do, so probably get the car back second half of next week.

It's really hard to tell with these photos, taken inside his barn, but the colour looks really deep and rich, it'll look fantastic out in the light with a good shiny wax on. 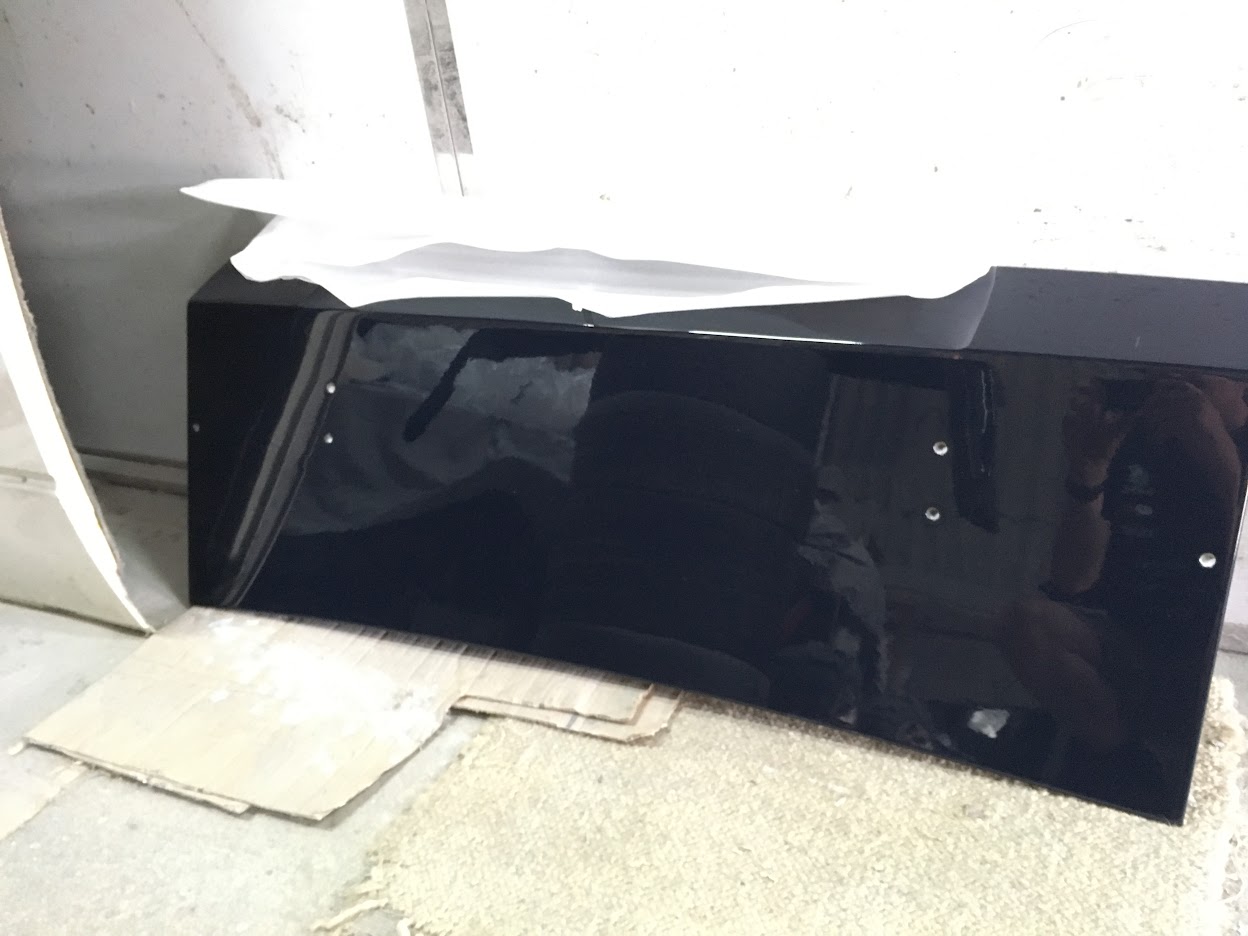 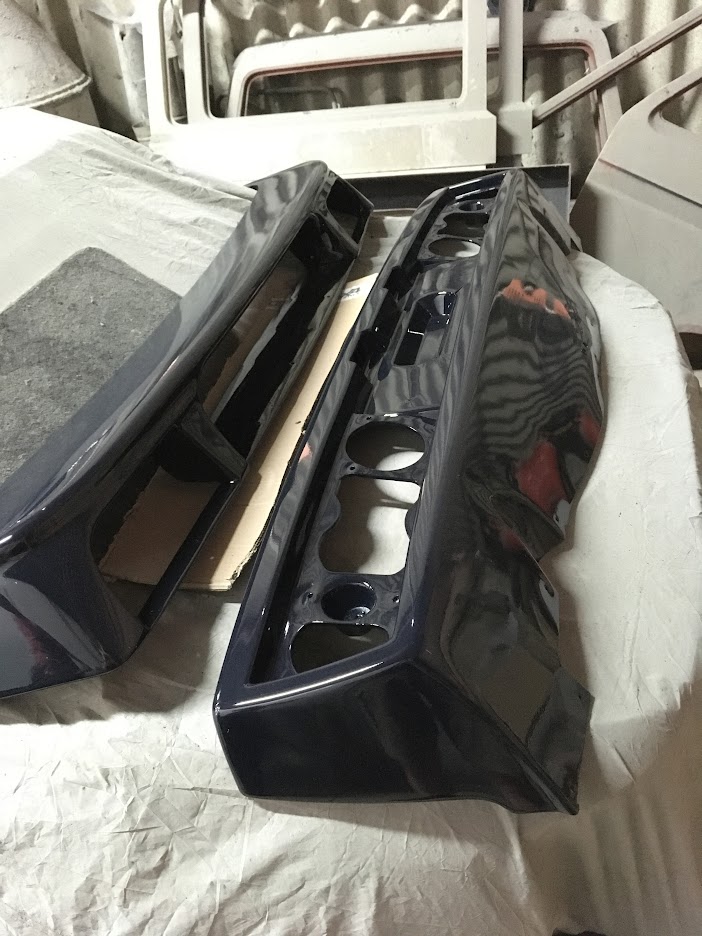 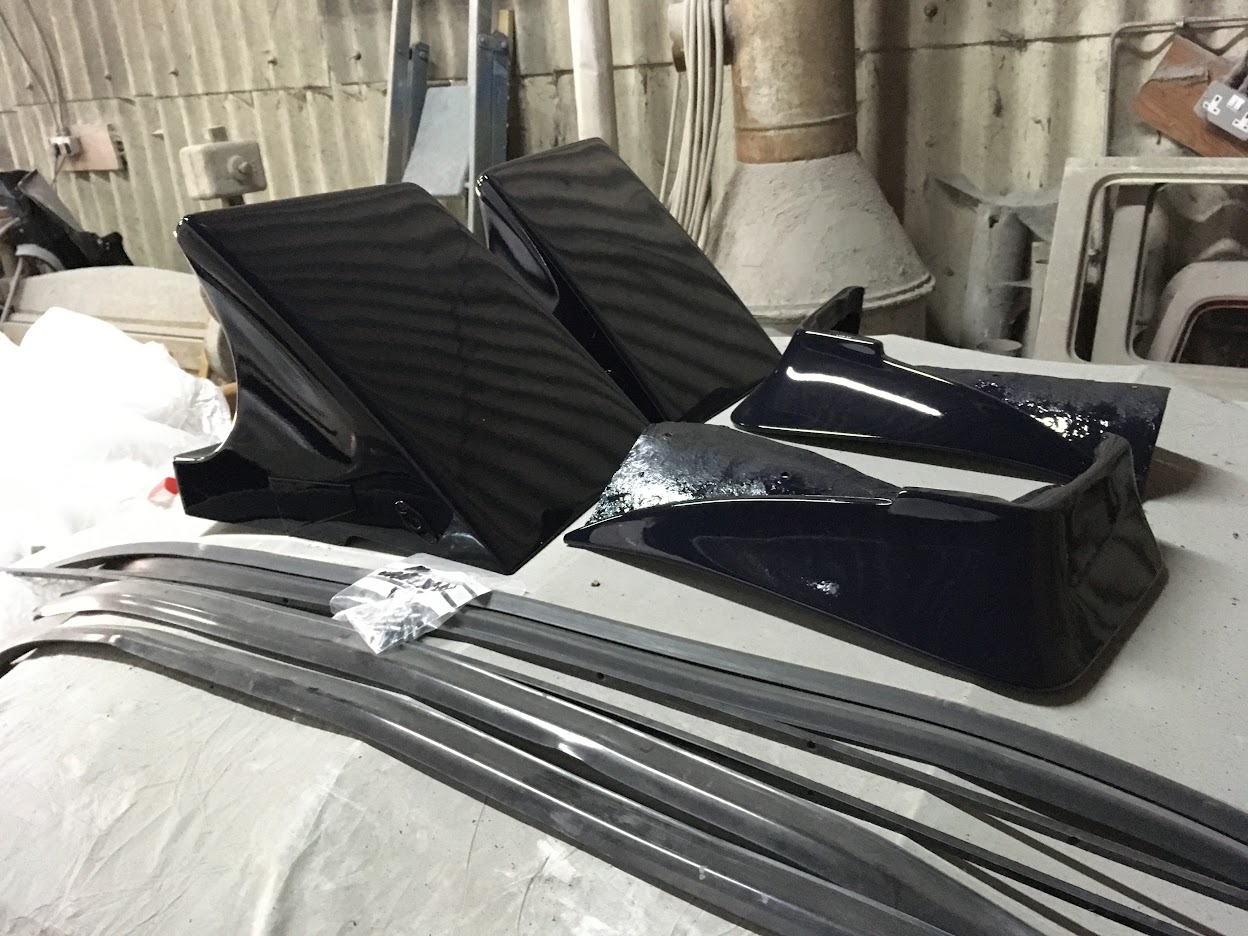 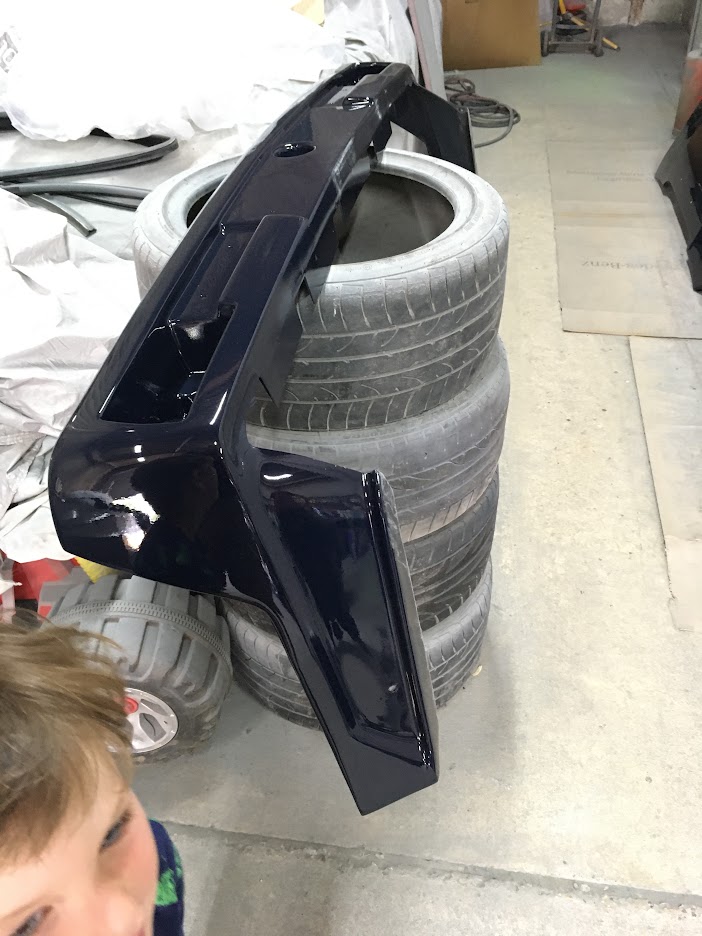 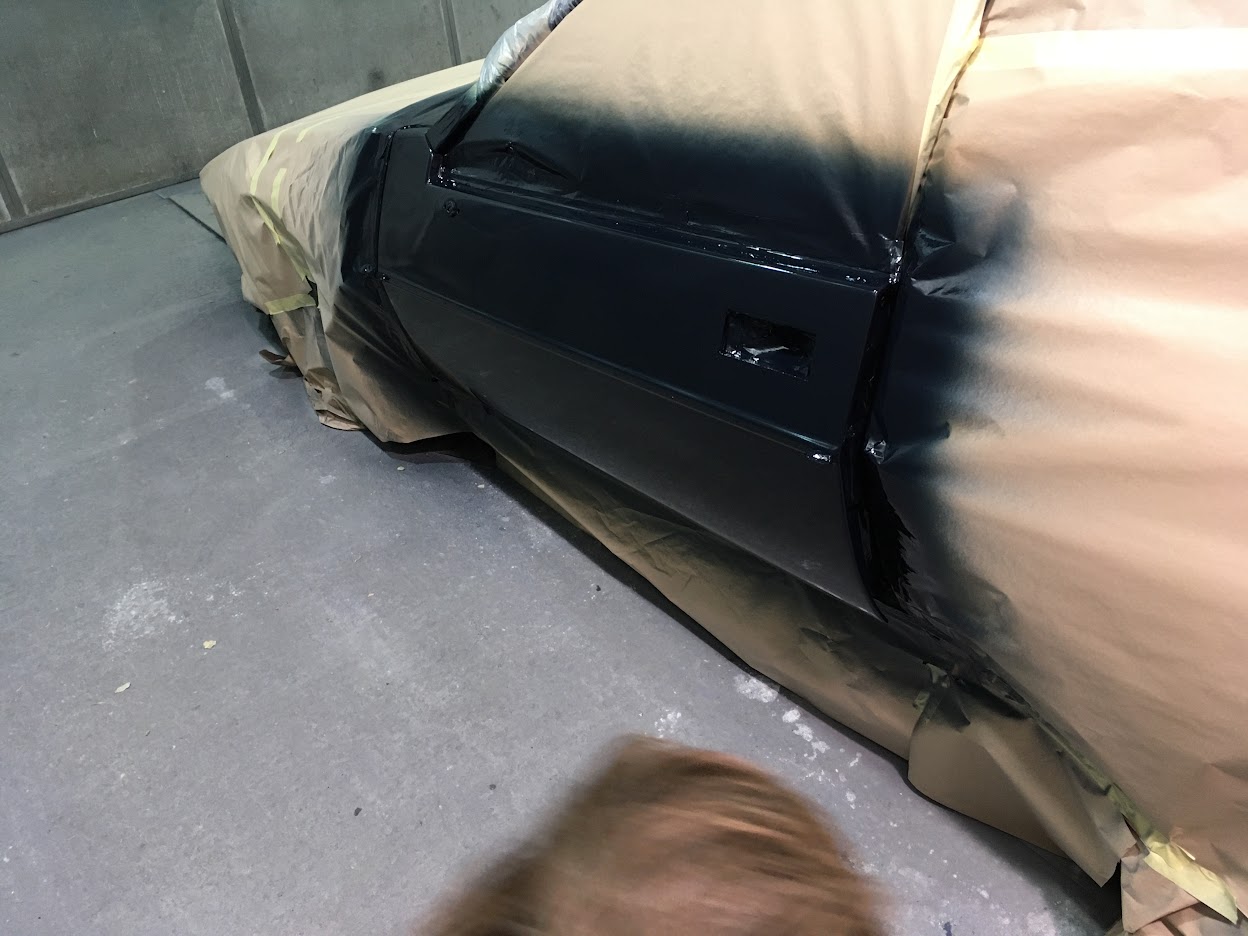 Brilliant! You must be itching to get it back! It's going to look fantastic

Those parts do look good. It's going to be worth the wait!
What car is that?
Top