If you spot one, shame them into owning up!!
If you are new to the Lotus position introduce yourself here. Please try to keep your the post to your introduction and your initial question/problems to the right formum.

Don't know how familiar you are with the 900 series engine, but later cars changed to a deeper timing belt profile. HTD.
Your pulleys look in OK condition (they can wear very quickly once through the anodising), but depending how many miles you think you'll be doing, you may want to consider upgrading to the HTD pulleys and belt.
Tony
What goes together.... Must come apart.
Top

Alrighty then, it's been a little while since the last update

I took the sump plug out and managed to get myself coated in the oil/fuel mix that came out. I can confirm there's fuel in the sump, as I smelt of fuel for about 3 days afterwards.

That's likely it for engine progress for a little while.

I then turned my attention to stripping the elite chassis of saleable parts before collecting the Excel chassis. Between the breaker bar, angle grinder and sheer brute force and ignorance managed to get the elite chassis fully stripped in 5 days. 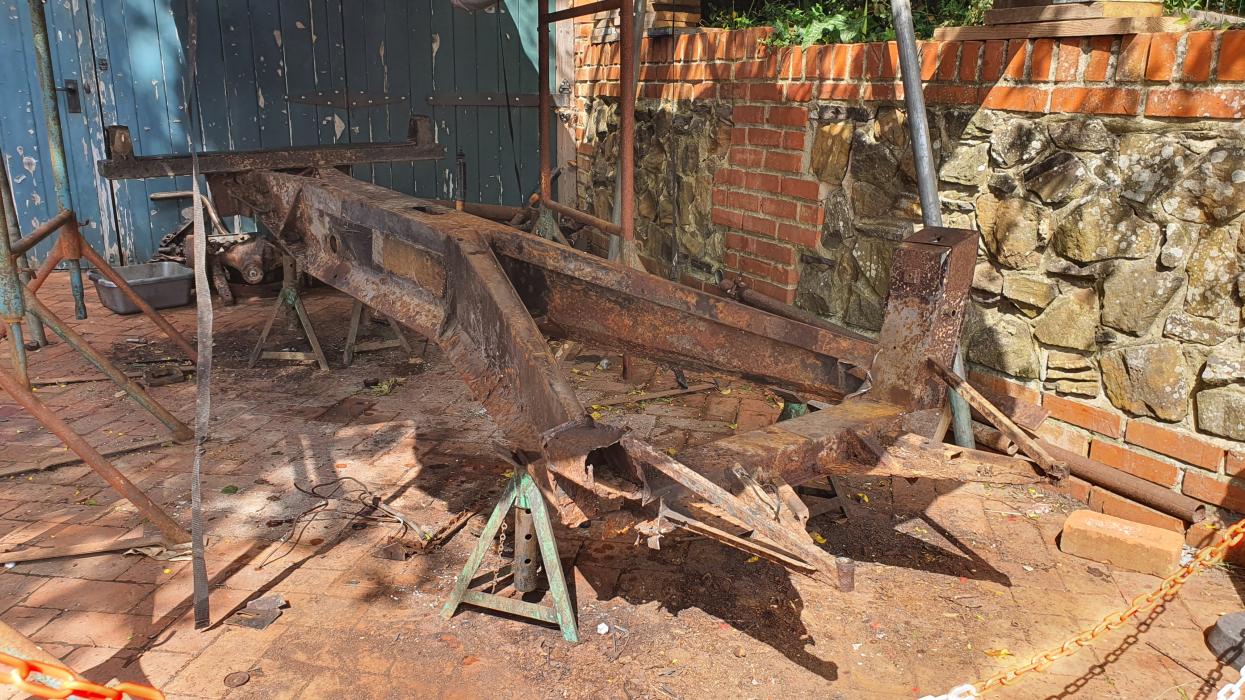 The main area that gave me trouble was the bottom mounting point for the diff, but the angle grinder quickly sorted that out, leaving me with a large pile of parts ready to sort through, clean up, and sell the parts I have no use for. 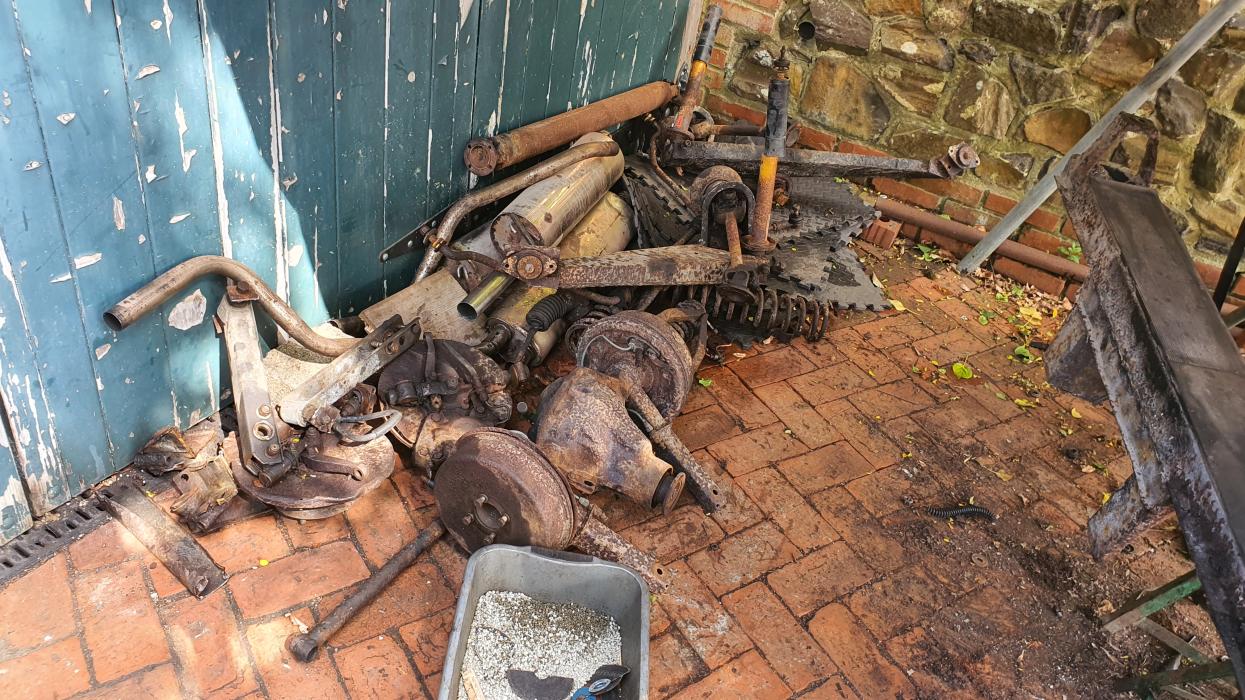 With that sorted, I got some help to move the elite chassis onto a trailer, and towed it up to the wonderful folks at Lotus bits (who frankly this project couldn't happen without), where they took the remains of the elite chassis, an envelope of unmarked cash, and I was soon on my home with a nice shiny(er) Excel Rolling chassis along with a box load of parts to rebuild it! 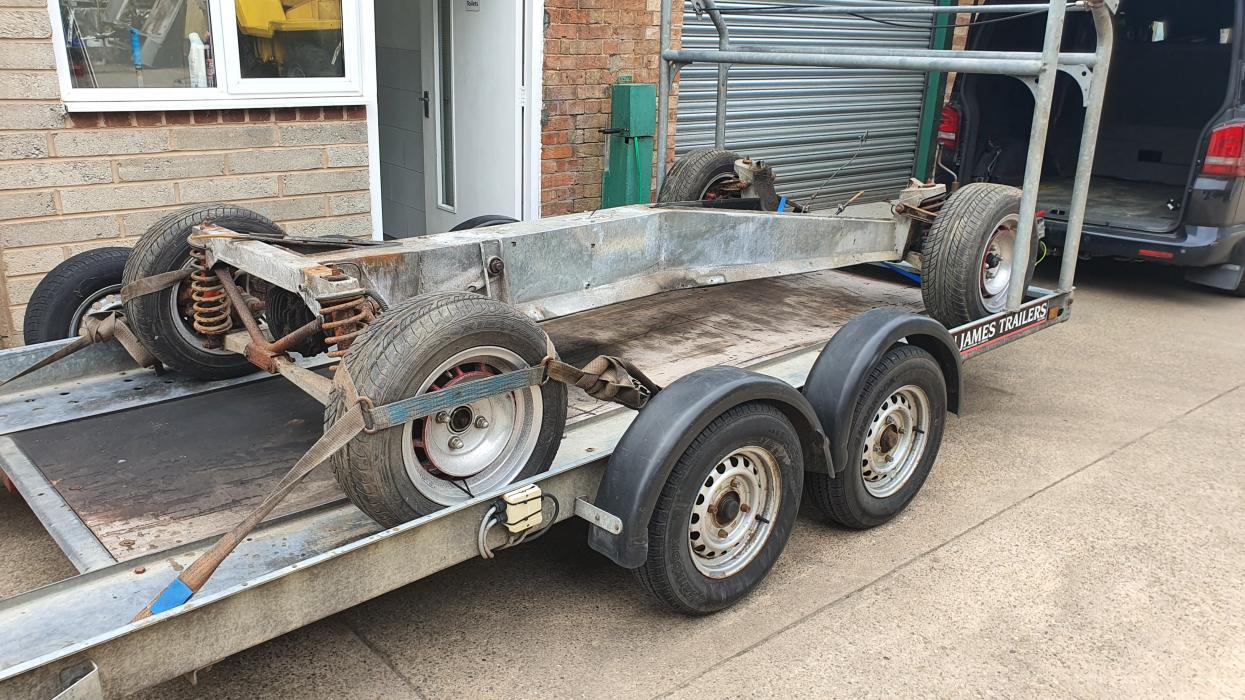 The boxes of lovely new / refurbished parts have been squirrelled away with the rest of the parts that came with the car, ready for when the chassis starts going back together. 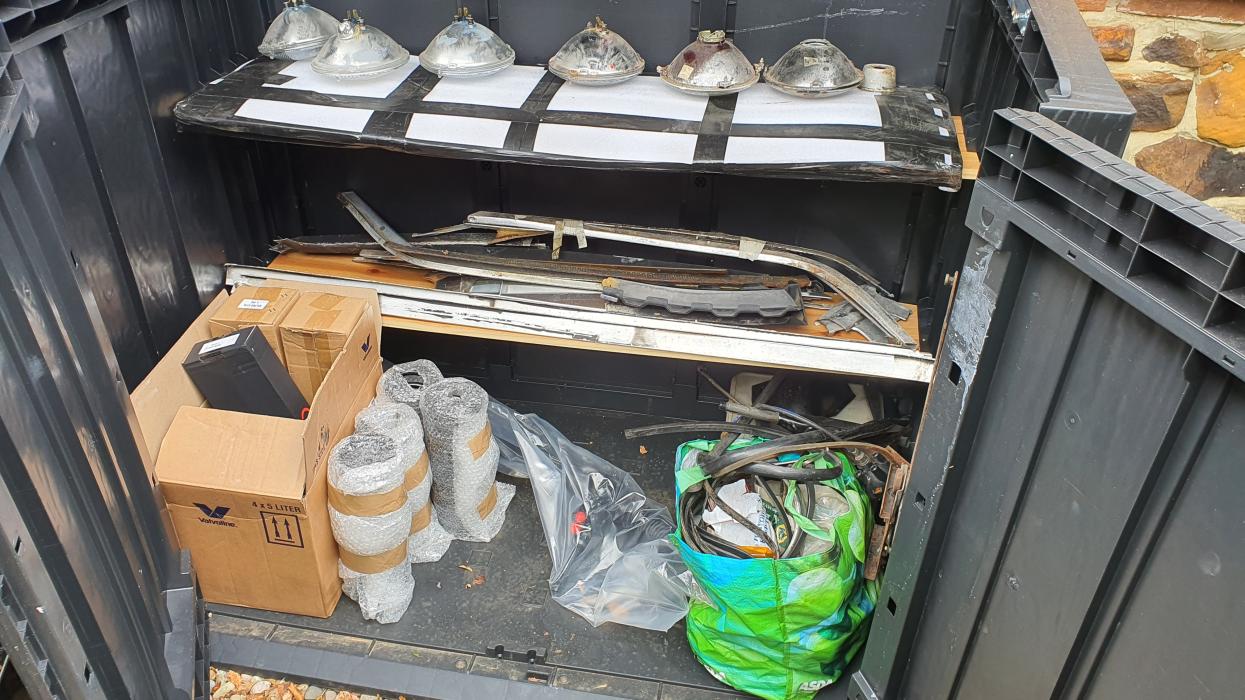 The following week I was unable to touch the lotus during the weekdays, as I had other commitments filling my time, I was however able to pick up a small air compressor from Facebook marketplace and some cheap Silverline air tools, including an impact gun, which drains the compressors tank in about 20 seconds, but that's enough to get a seized nut undone, especially useful as it would take far longer with the breaker bar and elbow grease.
At the weekend however a friend was free, and wanted to come get stuck in, so, between the two of us we managed to give the Excel chassis a wash down with degreaser and get it 95% stripped in two days, not bad going me thinks. 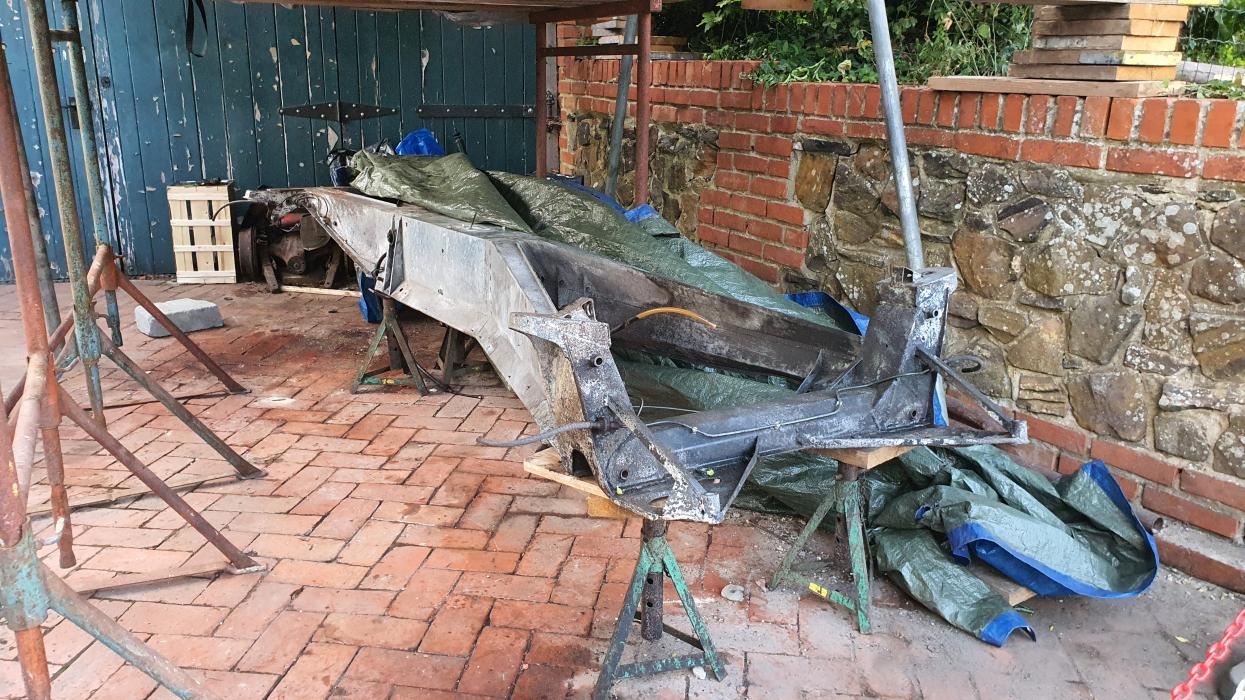 The only things left on the chassis are the brake and fuel lines, but I now have two large piles of parts, one from the elite chassis, and one from the Excel chassis that I need to sort out before I start getting yelled at 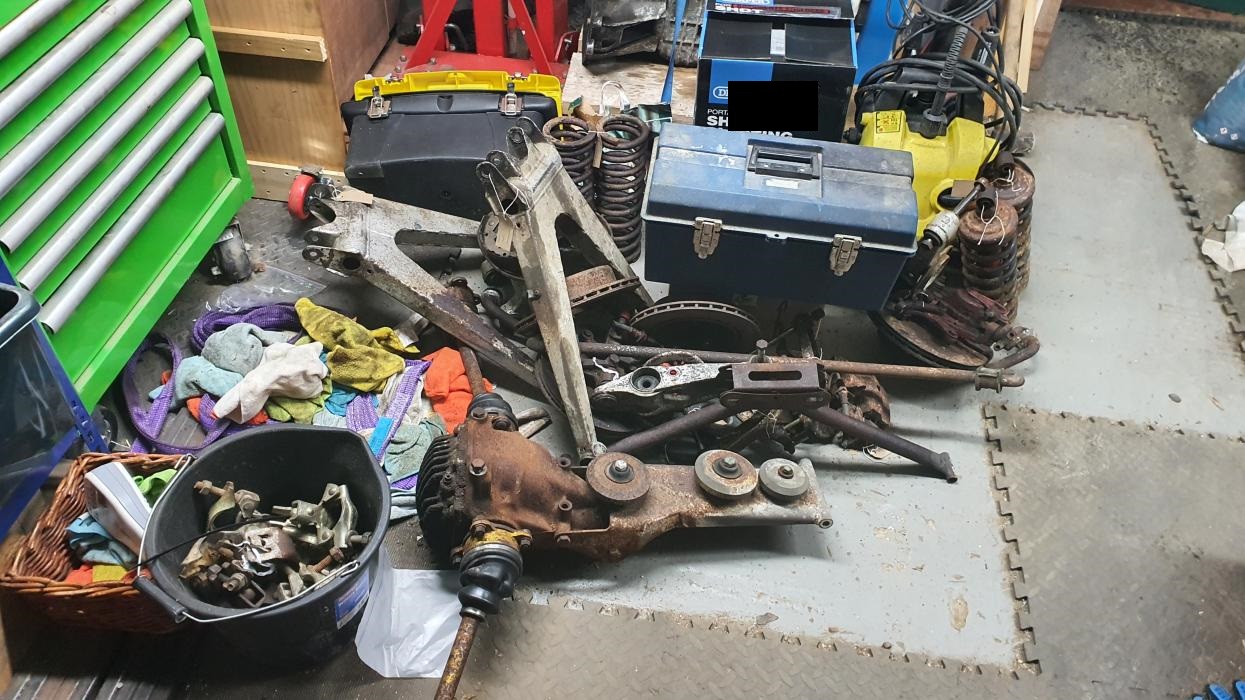 I've picked up a cheap sandblasting kit that should work with the air compressor, (both run at 4.5CFM, so we'll see what happens) so my next step is to break down all the sub-assemblies such as the hubs. Then, some parts will be sent off to be cleaned and reconditioned by the folks at Lotus Bits, whilst others (chassis included) I'll be sandblasting (only the bits of the chassis that need it) before liberally coating everything in Galvafroid to keep the rust at bay.

And with that, you're all caught up, there's a lotta pictures in this post, so I hope that doesn't cause any issues.
Top

. Will you advertise your excess parts on here first?

No progress on the lotus itself today, although I have now finally managed to clear a workbench, which will make diss-assembling the sub assemblies far easier

MetBlue wrote: ↑
Sat May 14, 2022 09:00
Don't know how familiar you are with the 900 series engine, but later cars changed to a deeper timing belt profile. HTD.
Your pulleys look in OK condition (they can wear very quickly once through the anodising), but depending on how many miles you think you'll be doing, you may want to consider upgrading to the HTD pulleys and belt.
Tony

I will admit, I have no experience with the Lotus engines, but I shall bear the possibility of changing to the HTD pulleys/belt. I feel before I get stuck into any serious engine work, I'll have to spend some time researching the engine itself. Of course as with all things money is the main limiting factor, but if there are weaknesses within the engine that can be addressed it will be worth trying to do so in the process

. Will you advertise your excess parts on here first?

I will be, granted I have no idea on the condition of the parts, but if there are any parts in particular you're interested in give me a shout, and we'll work something out, I have pretty much everything that bolts to the chassis. I'll double-check the paperwork before I sell anything, but from memory the car was last MOT'd in 2006 with 95K miles, so I assume it's been sat since then. So anything from it will want some attention before being used.
Top

. there's a lotta pictures in this post, so I hope that doesn't cause any issues.

.
Keep 'em coming.
Great progress by the way.
Tony
What goes together.... Must come apart.
Top

Wow, great work. An other Elite saved. I guess there will be very few people who would start such a project..

Okay, it's been far too long since I updated, but to be honest not a massive amount has happened in the last err... month?

All the sub assemblies I took off of the chassis have been taken apart and sent to be cleaned up and powder coated / zinc passivated where appropriate via the wonderful people at LotusBits. I've had a few bits back, but not quite enough to get one end of the chassis back on its wheels.

Meanwhile, I used assorted wire brushes and wheels powered by the angle grinder, drill and elbow grease, along with small spots of sandblasting to get the chassis totally clean, it was then wiped down with pure alcohol before giving it around 3 coats of Galvafroid, a zinc heavy paint that doesn't require top coating. 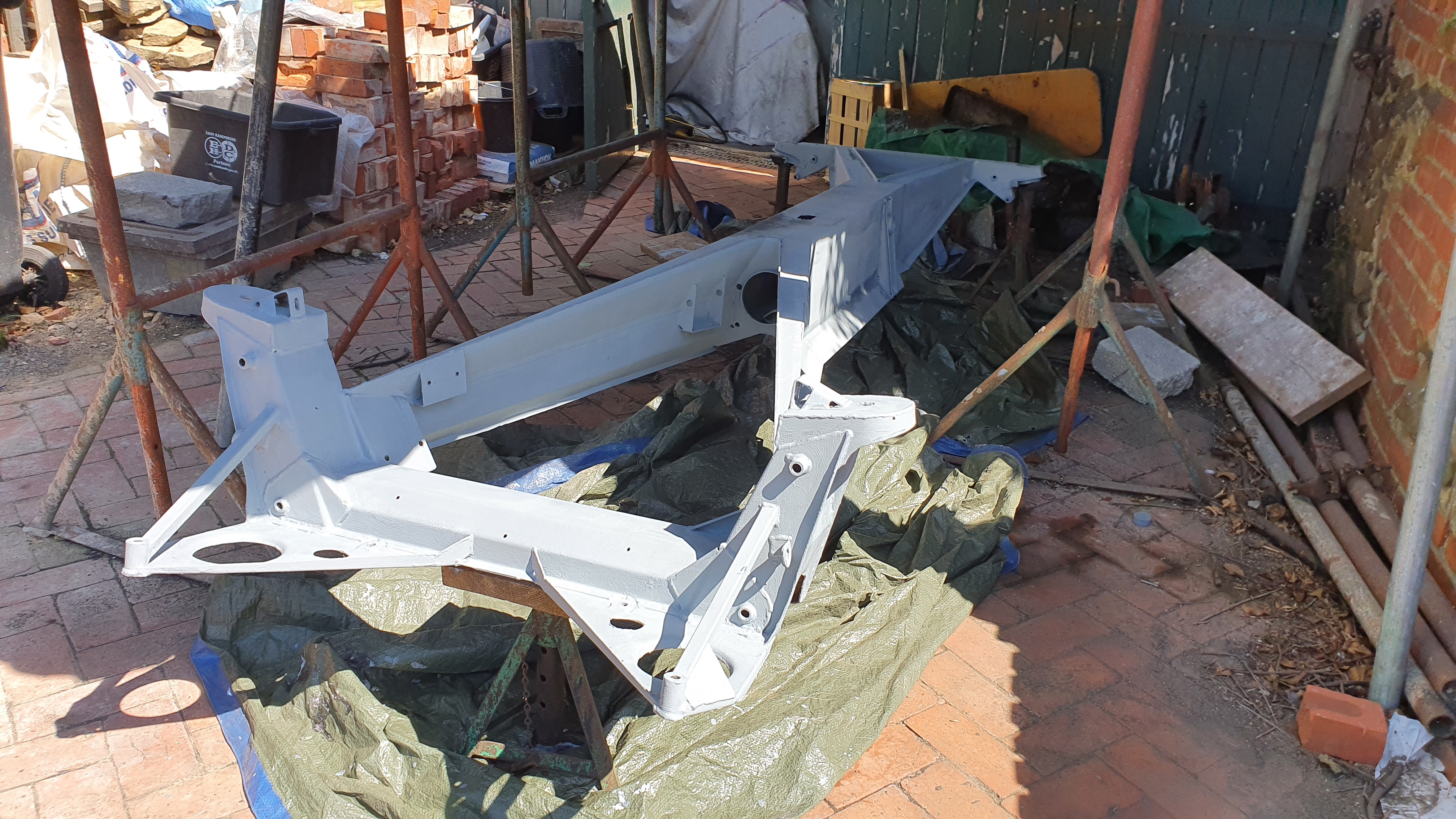 The only issue with this is I REALLY didn't like the colour of the dried Galvafroid on the chassis, I think it looks far too light, almost like an unfinished/primer. So the chassis then got two coats of a hard wearing black paint, which frankly i cant remember the details of, other than "it's black, hard wearing, recommended for my application by the manufacturers of Galvafroid" 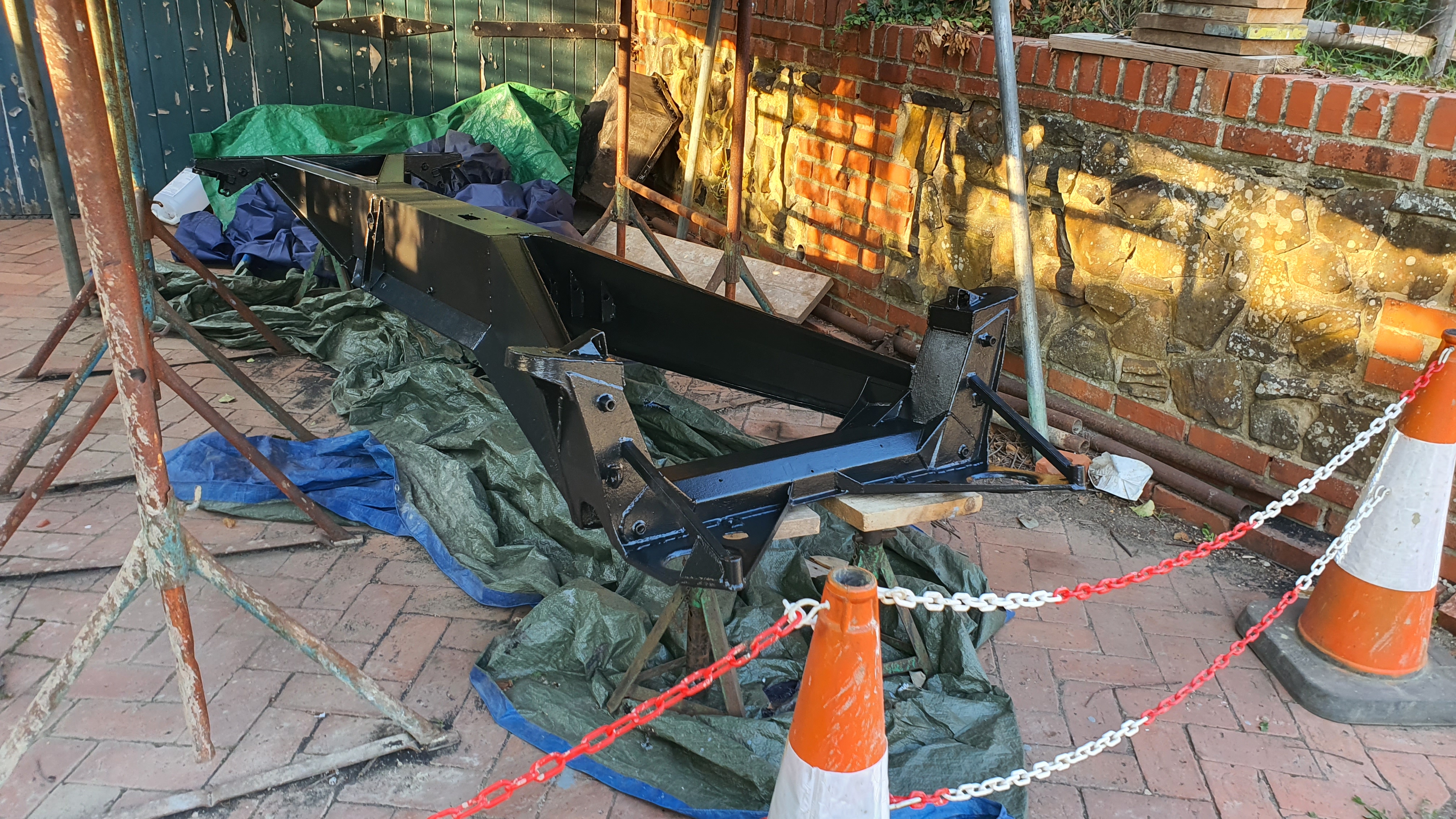 I also made the decision to use an Excel Gearbox in the car in place of the weaker original elite gearbox, which would require a custom prop shaft to be constructed in order to work in the Excel chassis, I was lucky enough to pick up a low mile (32k) excel gearbox, gearstick and cradle for around £400 from eBay and a propshaft in need of some love from the gents at, you guessed it, LotusBits. 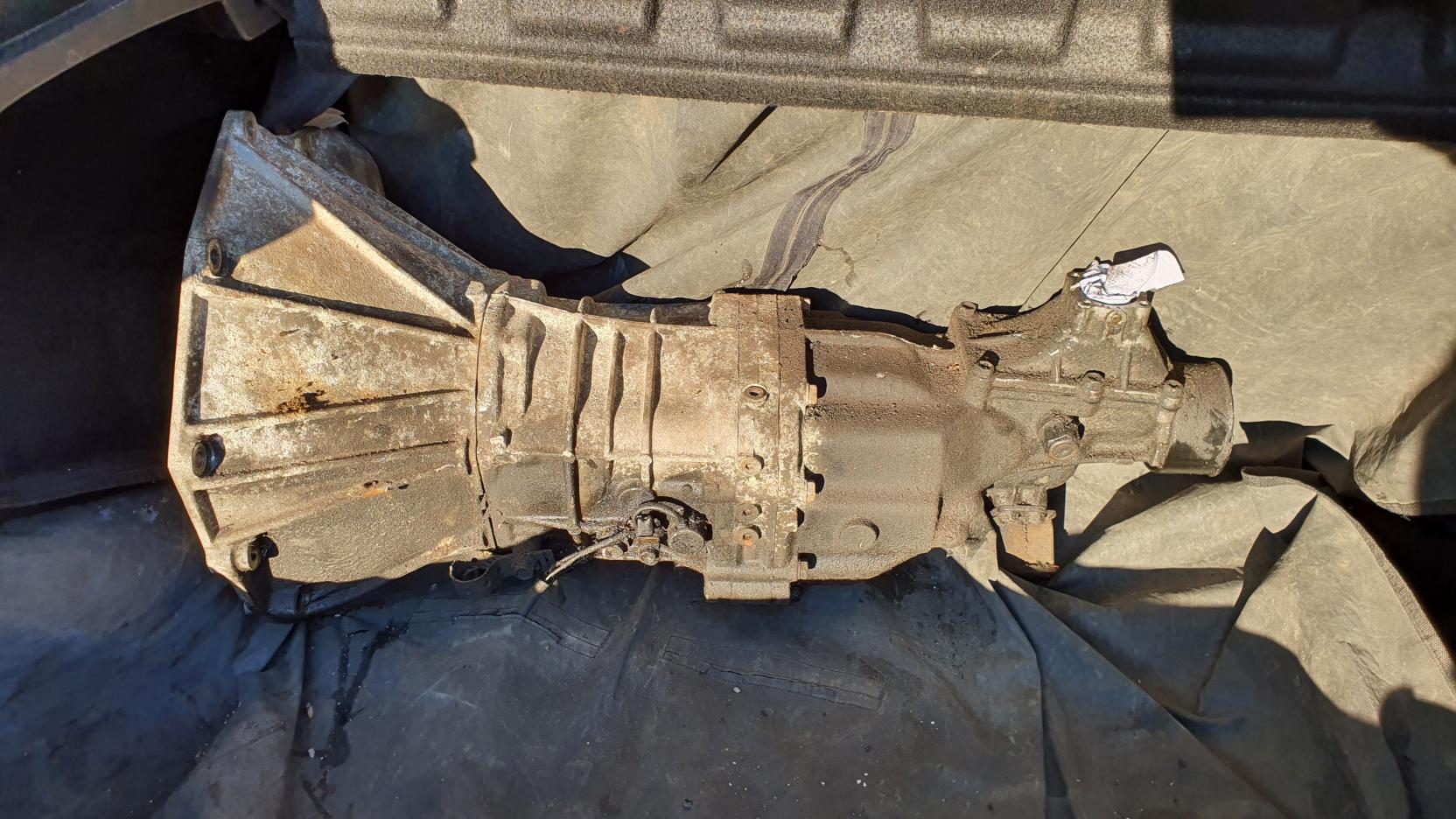 The Gearbox will need some small modification to the bell housing and clutch release arm and bearing as the elite gearbox uses a clutch cable, whereas the Excel is hydraulic, but that's an issue for future me, future me is very good at dealing with these kinda of problems...

And that pretty much covers all the progress of the last month or so, Oh! I'm leaving for two weeks holiday on the Isle of Wight, so with nobody to keep an eye on the chassis sat unsecured on the driveway, I managed to clear out just enough space in the garage to get the chassis locked away. It was at that point i realised that somebody dumped the body of an old lotus 4ft in the air, stopping the garage door proper from opening, so the chassis had to be carefully carried on its side through a doorway before being placed on a dolly (made from an old door and castors). 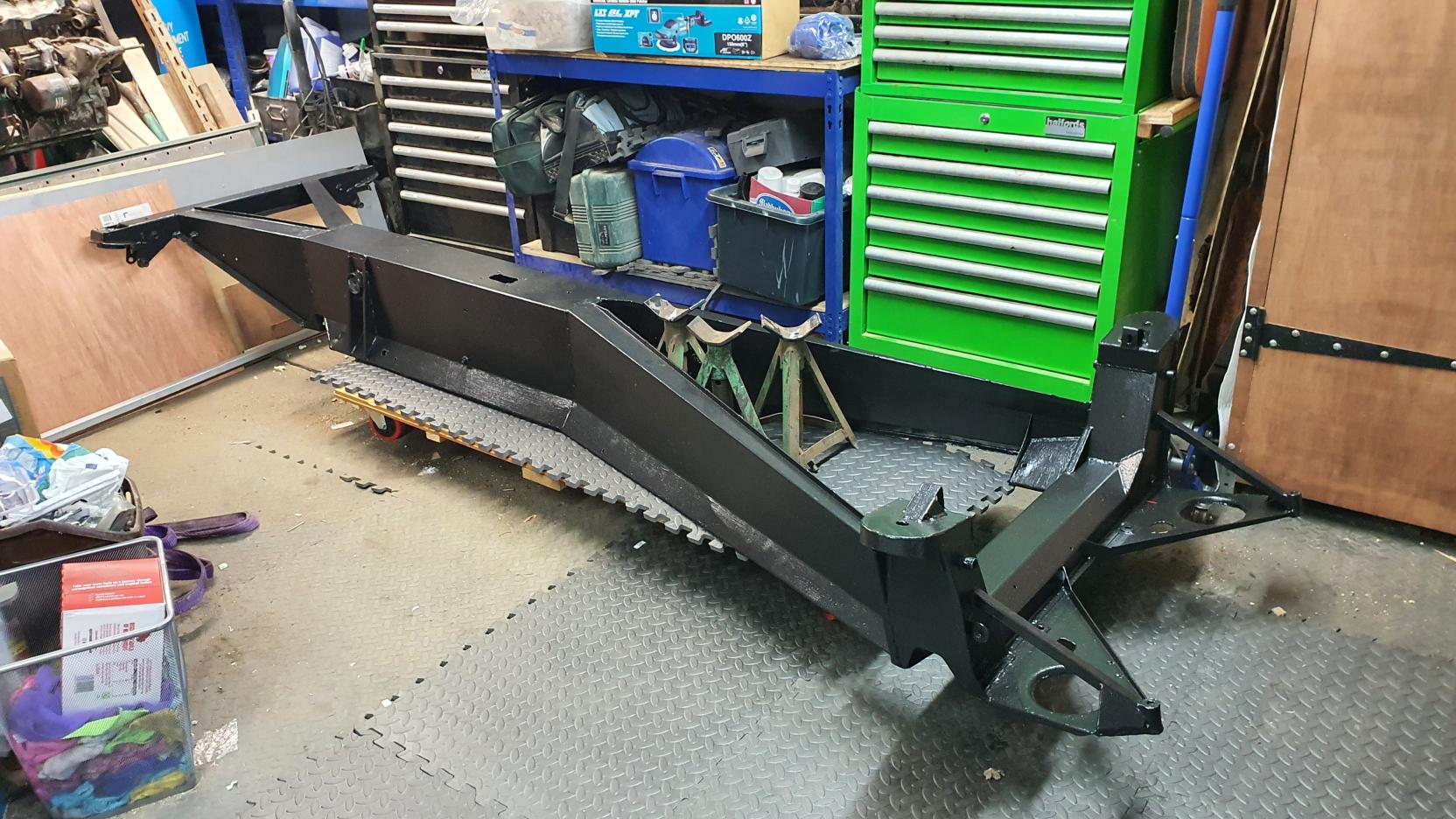 I also took the opportunity to get the body back down onto the floor in an attempt to dissuade any would be thieves, although, there's no stopping thieves if they are determined enough, after getting so used to seeing it floating up on the trestles it's strange seeing it back down at ground level. 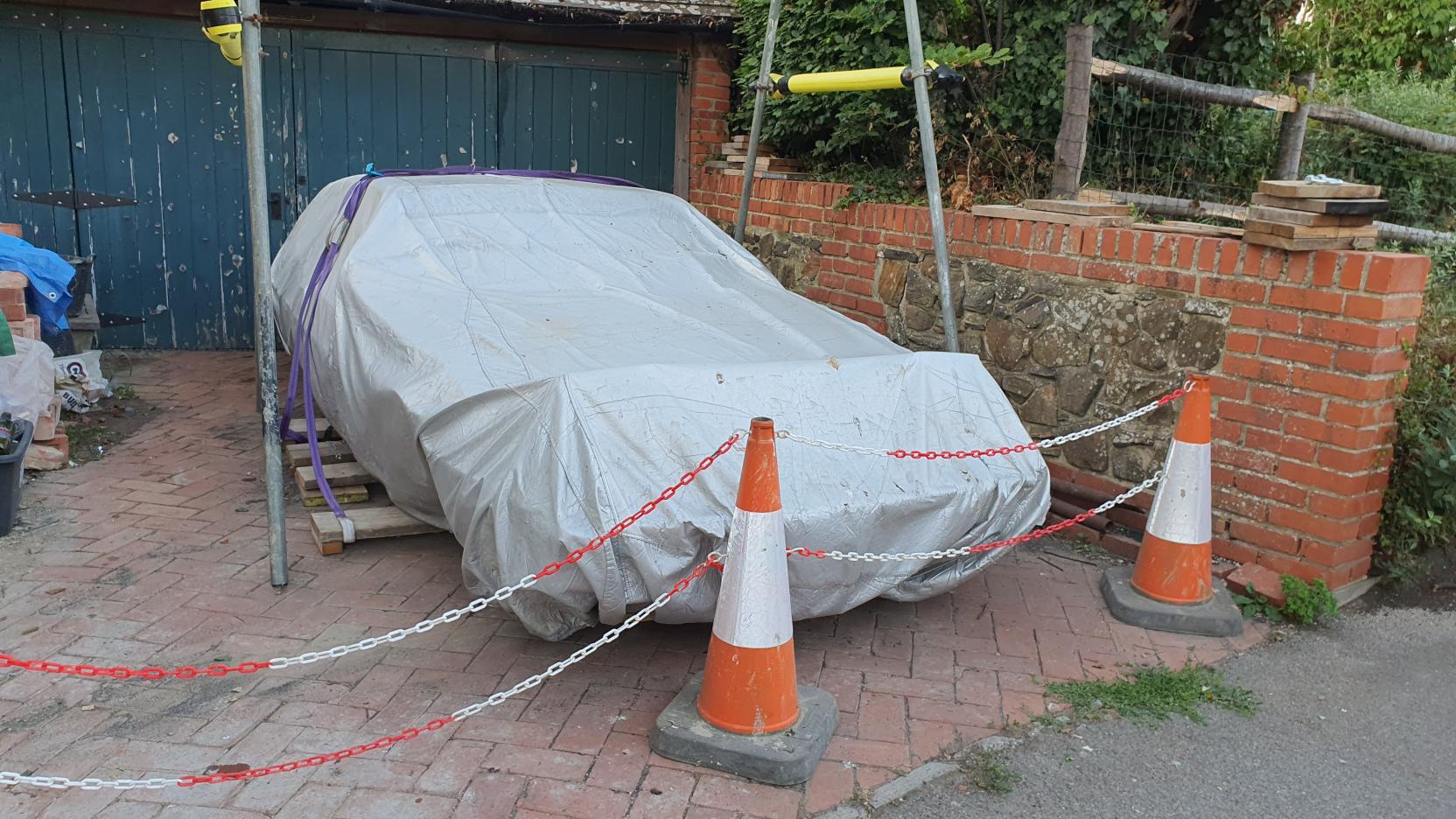 And now that is everything, you're all up to date. Not a massive amount has happened, but I figured you may appreciate the update, along with confirmation that the car is still progressing, and the thread has not been abandoned. With a bit of luck, the remaining parts will be ready to collect when I get back from the island, and I'll be able to start the rebuild. Maybe I'll also stop putting off replacing the differential seals too...

Great job dude, personally I would keep the hydraulic clutch, the cable clutch wasnt one if the elite/eclats best features.
Perhaps you need to be in the restoration thread section, looking forward to more episodes.

Great progress! Don't forget that you'll need the Excel engine mounts as well - the Elite ones won't work. That will put the gearbox in the correct location to not need a modified propshaft. Also - are you aware that there are different bell housings/input shafts on the Excel, depending on the year?

Thanks for taking the time to keep the updates coming. It's really interesting to see how you are tackling the job.
Kev W no.282
Top
Post Reply
25 posts